Angus Wall and Kirk Shintani of Elastic spoke to IndieWire about revamping the show’s opening to add a fresh new perspective and location. 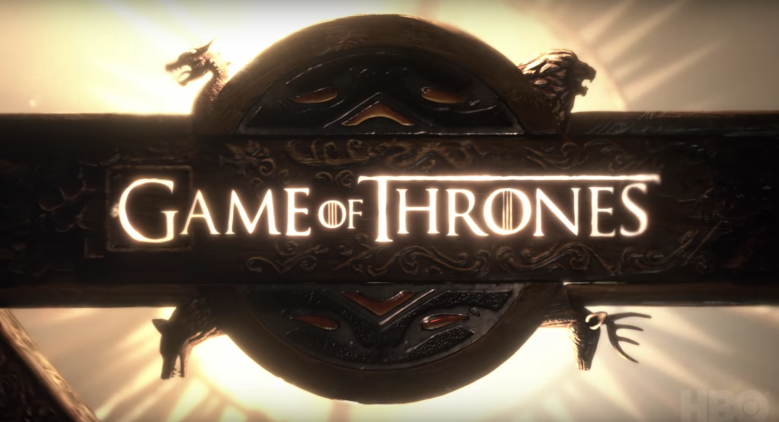 In its final season, “Game of Thrones” makes a major change to its iconic computer-generated opening credits to reflect the changes Westeros has undergone, creating a more intimate, stimulating experience. Each season, the show had opened up to a map of the world to visit the locations where the actions would take place, but with so many of the characters gathering together in Season 8, only three locations were used in the premiere: Winterfell, King’s Landing, and the Last Hearth. So for the first time ever, the camera goes inside each of these locations instead of staying on the surface of the map.

“Going into the last season, we aren’t necessarily required to keep establishing these locations, because everybody knows where they are and what they represent,” said Shintani. “It gave us a chance to kind of dive a little bit more in depth into each of the locations and not worry about having to localize the audience,”

Added Wall, “We actually explore the interiors and therefore the duration at each location is longer and goes further than the original. We wanted to really simplify the journey. We could stay lower to the ground, which I think is much more dramatic in a way. Because we didn’t have to constantly reorient the viewer from a very high point with the camera far above the ground, we could stay low and we could travel in ways that we’ve never been able to travel before.”

The length of the sequence is the same as previous ones, since it’s timed to Ramin Djawadi’s award-winning theme.

“It was kind of nice to be able to really explore in depth these different locations this season, versus sometimes we would actually visit seven different locations over the course of the title sequence,” Wall added. “The cameras just had to be hauling ass to get from place to place to fit six or seven locations in. This was a little more stately.”

“The big thing was, if it’s something a madman in a tower somewhere can build, then we’re good. That’s something that we’ve stuck with for all eight seasons,” said Shintani.

Take a look at the new main titles and then continue reading for Wall and Shintani’s breakdown of the sequence:

As always, the main titles opens on one band of an armillary sphere or astrolabe, which depicts significant moments in “Game of Thrones” history in relief images.

“The astrolabe has three new bands and three new relief sculptures depicting events that we’ve all experienced,” said Wall. “Anybody who’s watched the show will recognize those three seminal events that are now inscribed in the astrolabe. But then very quickly you realize the world has been recast in a different light, in a whole different look.”

This time around the bands depict Viseron burning down the Wall, the beheading of Ned Stark, and the rise of Daenerys Targaryen (Emilia Clarke). 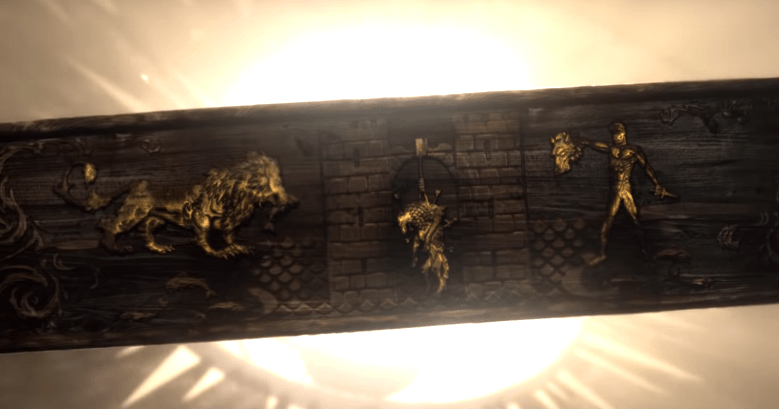 Since the camera would move inside structures this time, the buildings had to appear much larger than they had when they were raised but still squat images on a map. To keep all of the edifices consistently sized, they decided to make them to scale to a man who was about 6 feet, or as Wall noted, “probably Jaime Lannister.” [Editor’s Note: Nicolaj Coster-Waldau, who plays the Kingslayer, is 6-foot-2.]

“The world has been rebuilt from scratch from the ground up, and that’s something that all the artists that have worked on it really wanted to do,” said Wall. “They applied a very strict sense of scale in the structures, so all the textures, the wood grain is all to scale.”

Shintani said, “The Red Keep ended up being about 20 feet tall in our kind of language. That gave us the ability to go into it. That’s kind of the biggest thing. The stuff we had the previous seasons was really small. It was tiny. So, there’s no way we could actually get that amount of detail inside.”

King’s Landing and the Throne Room 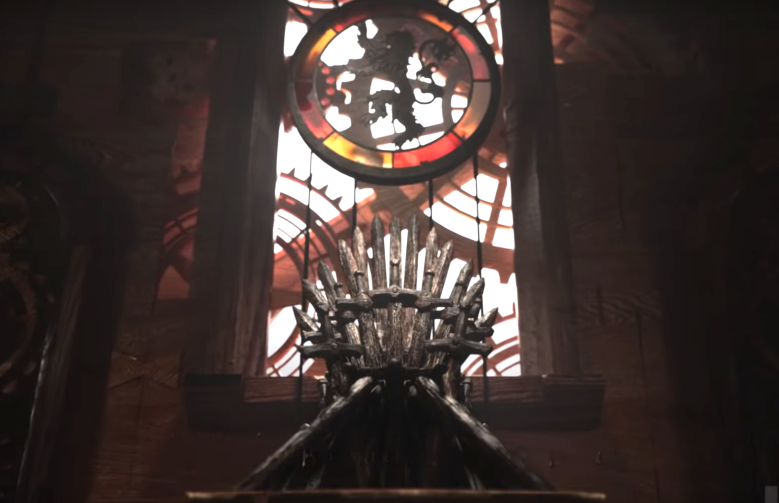 Ever since Season 1, Shintani had wanted to show the Iron Throne in the opening credits sequence, but since the camera stayed firmly on the outside of structures, that never happened… until now.

“The thing everybody on the crew kind of came back to was the throne room,” said Shintani. “It’s something that’s so iconic. That was one of the things that we were trying to include into the wider version of the map for Season 1 and it just didn’t really fit at the time.”

It had been assumed that daylight provided the lighting for the previous maps because those were exteriors, but going inside places like the Red Keep — in a world without electricity — posed a different problem.

“Most of the lighting actually comes from exterior sources. We thought of it as literally one continuation, moving from outside to inside,” said Wall. “One challenge within the innovation was how we open up the spaces in a way that’s dramatic, and how do we use the animation to actually let the exterior light reveal the scene? I’m really happy with how the lighting came out in those interiors. There’s a lot of really beautiful CG work and compositing work that just really makes those spaces feel incredibly evocative.” 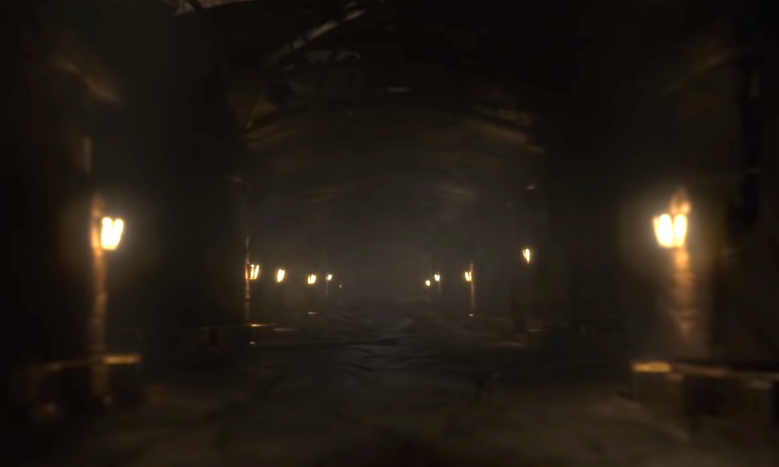 The crypts at Winterfell is the home to many of the deceased Stark clan including Ned Stark (Sean Bean) and have appeared in early Season 8 teasers and trailers. Naturally, the new main titles also travel below Winterfell.

“The big challenge in this season was how do you light the Winterfell crypt? We had more design iterations of the crypt underneath Winterfell than anything else in the sequence,” said Wall. “The crypt is 99 percent lit by torchlight, and where we ended up is really sort of a miniaturized version of the real thing, but there were other explorations that were more impressionistic in terms of trying to communicate the idea of torches. The light had some flicker to it to evoke real flickering torchlight.” 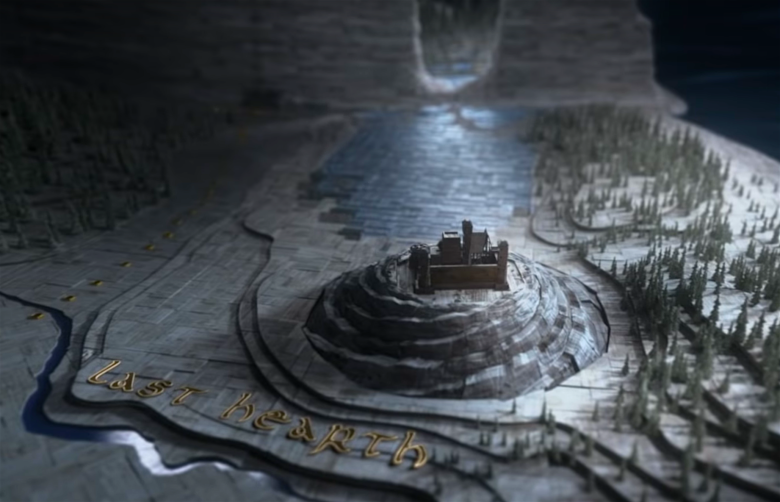 This marks the first opening sequence in the history of “Game of Thrones” without the Wall intact since it came tumbling down from dragon-fire in the Season 7 finale. But in order to represent the White Walker army, the main titles includes Last Hearth, which is just south of the Wall at Eastwatch, where the army of the undead broke through. It’s also the seat of House Umber.

“The original concept was this is a map that if you watched it, you could see everything: all the movement of all peoples, armies, tribes, so forth and so on. We never did that in the first seven seasons, and in this season we were able to,” said Wall. “There are tiles on the ground that flip from white to black, snow to ice. That’s representing the White Walkers’ march south through the rift in the Wall. And that was something that we’d actually talked about, that idea of the tiles flipping and revealing things, in the very initial design discussions of the title sequence. It happens now to actually be a more interactive map and not just a geography lesson.”

This Article is related to: Television and tagged Elastic, Game of Thrones, HBO, TV Interviews