The star-studded HBO event in New York included a slew of cast members, even those whose watch had ended. 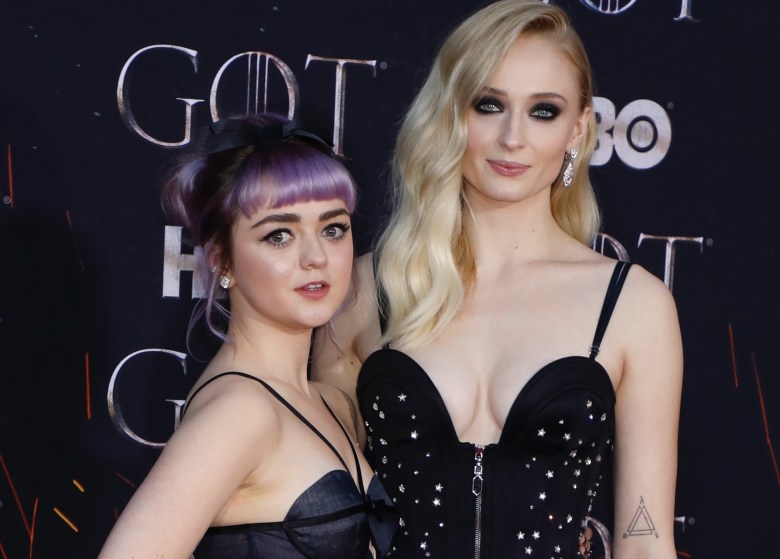 House Stark issued a warning at the global premiere screening of the “Game of Thrones” final season premiere Wednesday night at Radio City Music Hall in New York City. Two disembodied voices belonging to Sophie Turner, who plays Sansa Stark, and Maisie Williams, who plays Arya Stark, could be heard before the first episode aired in the auditorium:

Sansa: “No photos, no videos, no posting spoilers on social media.”
Arya: “Do you think you’re safe when you get home you stupid man? You’re never safe.”
Sansa: “If your phone should happen to ring during the show, your face would look lovely on my sister’s wall. We take these matters seriously. You should as well.”
Arya: “Remember what happened to the last bastard who fucked us.”
Sansa: “OK, enjoy the show.”

The tongue-in-cheek warning echoed the spoiler warning given to the audience a full two years ago in Los Angeles for the penultimate season of “Game of Thrones” when Kit Harington and Rose Leslie, in character as Jon Snow and Ygritte, addressed the fans.

Although there were no Rockettes in attendance — unless they were disguised as Whitewalkers — the venue was packed to the gills with fans from all over the world to mark the beginning of the end for the epic series. HBO executives had their say to reflect on the rocky road the show had taken to become a global hit. But it was series co-creators David Benioff and D.B. Weiss — aka the “gold standard” of showrunners — who offered the most heartfelt perspective and thanks to various directors, writers, producers, and even composers on the series.

“This is a happy night in some ways; we all get to celebrate the show that so many of us have been working on for so long,” said Benioff. “But it’s also a sad night because this is the last time that so many of the ‘Game of Thrones’ family will gather under one roof.”

And of course, the show would never have existed if not for one man.

Weiss said, “Making a television show is a team effort, but Tyrion Lannister, Jon Snow, and Daenerys Targaryen were born in a single, brilliant, ruthless mind. George [R.R. Martin], thank you for letting us take your children into our care. Sorry we didn’t treat them better.”

The showrunners also reflected on how the show had shot an expensive failed pilot before it reshot its expensive successful pilot episode. When all was said and done though, success prevailed in the Seven Kingdoms.

Over its eight seasons, “Game of Thrones” has been host to a massive ensemble cast, many of them in attendance that night. Besides current cast members like Kit Harington, Emilia Clarke, Peter Dinklage, several more former cast members gave truth to the Iron Islands saying, “What is dead may never die.” Among those who died on the show who were present included Sean Bean (the poor patriarch Ned Stark), Jack Gleeson (that tyrant Joffrey), Jason Momoa (our sun and stars Khal Drogo), and Kristian Nairn (Hodor!).

No spoilers can be revealed from the screening, but plenty of gasps, cries, and laughs could be heard during the episode, which clocked in at 54 minutes. But that is just the appetizer, the Westerosi amuse bouche as it were, for the final season, in which four of the six episodes run well over an hour.

But since IndieWire does not wish to incur the wrath of the Stark siblings, not much more can be said until the April 14 premiere, when the site’s full review of the premiere is up. In the meantime, fans can check out the photos of the red carpet premiere in the gallery above or just click here.