Suranne Jones gives a performance worthy of Anne Lister's legacy, while the rest of "Gentleman Jack" endeavors to keep up. 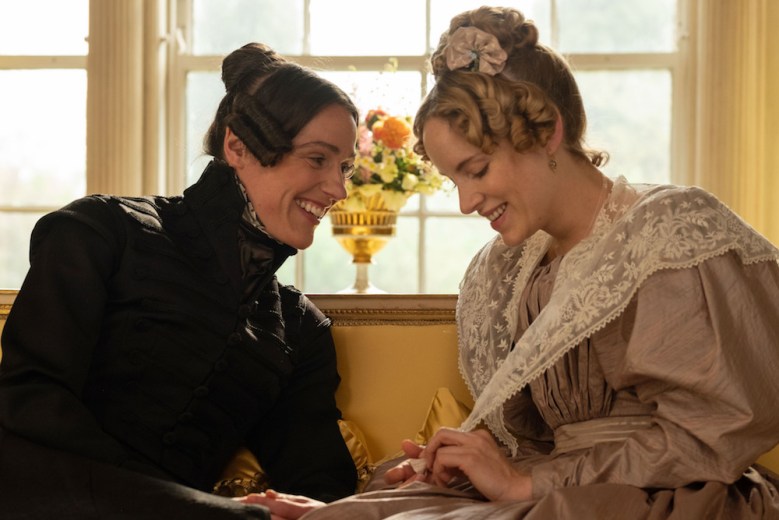 At the very end of “Gentleman Jack’s” first episode, the eponymous protagonist shows up unannounced but fully prepared to start courting a new love interest. Giddy with excitement, “Jack” asks to see the lady of the house and, with a quick pump of the eyebrows, looks directly into the camera.

While far from a revolutionary choice in the golden age of “Fleabag,” a character breaking the fourth wall is still rather surprising in what’s otherwise a by-the-books period drama. Sure, writer-director Sally Wainwright (“Happy Valley”) shows a bit of flair from time to time — a cracking, up-tempo rhythm accompanies the title credits — but she needs to show more. You see, Gentleman Jack is Anne Lister (Suranne Jones), whose decoded diary entries inspire the series of the same name. A music cue here and a fourth-wall break there don’t quite match the swagger of this LGBTQ icon — or the bona fide star playing her.

HBO’s eight-episode first season recounts part of Anne Lister’s many, many diaries and unearths a love story its 19th century observers tried to bury; one so scandalous, she had to pen her experiences in code. Lister is a lesbian. A landowner and landlord with a respected ancestral home in Halifax, she wants what any resident of the age would: an enriching marriage and a profitable business. But unlike the rest of her peers, Lister isn’t willing to marry a man to achieve financial security and companionship. She’s determined to live with a woman, even if it means getting her heart broken.

This broad strokes summary lends itself to a number of storylines — as does the abundance of source material; Lister’s diaries topped 4 million words. And at times, it can feel like you’re watching a lesser anecdote from her life. Wainwright focuses on the romance with Ann Walker (Sophie Rundle), a wealthy young woman who lives nearby and proves amiable to Lister’s advances. But little in their relationship (at least through five episodes) reflects the pain seen in a brief flashback to Lister’s last, passionate love: Marianna Lawton, who left Lister to marry a man.

But focusing on forward-momentum often befits Jones’ encapsulation of Lister, a performance that also happens to be the most eye-opening aspect of “Gentleman Jack.” The British TV veteran from “Doctor Foster” and “Scott & Bailey” strides through each episode with an apt air of defiance and demand. She recognizes how a woman dressed in all black, wearing a top hat, suit coat, and carefully rolled-up hair would approach the world around her: with a respectful nod to those who accept her and a less polite “fuck off” to those who don’t. Still, carefully placed confessionals provide insight into the daily pain Lister faces just for asking to be treated fairly, and Jones builds that hurt into her gait; she’s walking with purpose, and sometimes that purpose is to forget the cruelty all around her.

Precise, attentive, and beguiling, Jones is such a gust of fresh air, it’s tough for the series around her to keep up. Now, given the genre’s preference for gorgeous countrysides and eye-catching formalwear — if not the incongruence of both, together — period dramas often get a bit stuffy, so any kind of breezy creative choices can feel as refreshing as well water on a hot day. Similarly, throwing in too many modern diversions can betray the honest intentions behind these stories. Striking a balance is key.

But Wainwright can’t even follow through on her own devices. When the second episode starts, Anne, while pacing up a country road, narrates part of her diaries while looking into the camera. It appears as though breaking the fourth wall was done with the intent to bring Lister’s real voice into the series as much as it was a stylistic choice meant to mimic her distinctive spirit. And yet, it fades away. The direct-to-camera quips and glances continue to bookend episodes, but the lack of consistency in how they’re utilized is similar to the series’ struggles with regular rambunctiousness.

For those eager for a period drama, “Gentleman Jack” is worth digging into. For those craving a dutiful interpretation of Lister’s legacy, it would be hard to argue this isn’t an enthusiastic, dedicated retelling of her hardships and values. It’s only in modeling itself after its star does the series start to come up short, as the storytelling style can be frustrating in its narrow imagination. Still, there’s Jones — a true original with a vivid arrival.