It's all fun and games until someone gets accused of murder. 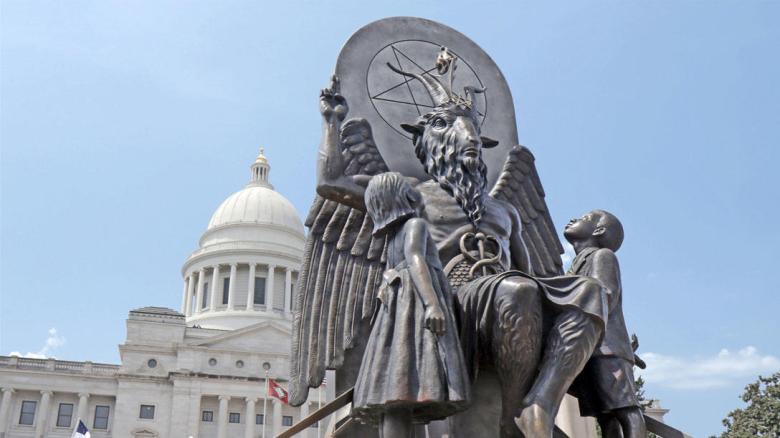 That the title of Penny Lane’s documentary is a question, not a statement, holds more meaning than you might think. “Hail Satan?” follows the Satanic Temple’s years-long efforts to advocate for religious pluralism and redefine what it means to be a Satanist, as the group believes that “witch hunters” have been allowed to set the terms of debate for too long. One case in point: the Satanic Panic that influenced everything from the public perception of bands like Judas Priest to how the West Memphis Three were prosecuted.

Lane doesn’t go in depth on this subject, focusing instead on TST’s overall efforts, but it’s worth exploring further — especially since neither the Temple nor most other self-proclaimed Satanists even believe in the Devil, let alone worship him.

The main thrust of that original campaign was claiming that playing heavy-metal albums backwards revealed Satanic messages and demonizing kids who played “Dungeons & Dragons,” but film played an important role as well. The Devil has been featured onscreen for almost as long as the medium has existed, with F.W. Murnau’s 1926 take on the Faust mythos providing one early example, but it would be decades before the horror genre exploited him to full effect.

Like a lot of other developments in the genre, we have “The Exorcist” to thank for this. Both William Peter Blatty’s 1971 novel and William Friedkin’s 1973 movie adaptation ingratiated themselves into the public consciousness like few tales of demonic possession before them; both were preceded by “Rosemary’s Baby,” but “The Exorcist” made more than 10 times as much money at the box office ($441.3 million versus $33.4 million) and received 10 Academy Award nominations, including Best Picture.

“The Exorcist” also made people really, really afraid of being possessed. The tales of ambulances stationed near movie theaters to whisk away audience members who fainted from fear are well known, but what about the millions who went home and lost sleep over the thought of Satan taking control of their bodies? Ripoffs quickly followed, with Warner Bros. taking successful legal action against both “Abby” and “Beyond the Door,” and though none of “The Exorcist’s” would-be successors came anywhere close to replicating its success (including its own sequels), their very existence shows the extent to which the idea of possession had taken hold.

“The Omen” arrived three years later, introducing the world to young Damien: a kind of wolf in sheep’s clothing, only instead of a sheep he’s a child, and instead of a wolf, he’s the Antichrist. No one is safe from Satan’s influence, these movies tell us, even and especially children. And though neither “The Exorcist” nor “The Omen” were the subject of the sort of scorn that Led Zeppelin and “D&D” were, they helped certain ideas take root in the collective imagination.

Still, neither film was specifically blamed for any actual crimes. The same can’t be said of 1987’s “The Believers,” a film which a group of cartel members responsible for a series of grisly murders said they watched as an “instructional video.” About a psychiatrist (Martin Sheen) who believes a brujería-inspired cult wants to make his son their latest child sacrifice, John Schlesinger’s (“Midnight Cowboy”) film is, in most other respects, not especially notable. This footnote has lent it certain infamy, however.

Adolfo Constanzo and Sara Aldrete led a cult known as the Narcosatanists, which was responsible for ritualistic murders in Matamoros, Mexico. After watching “The Believers” with a group of followers, according to a Rolling Stone article, Aldrete “stood up and began to preach in strange tones about the occult.” It was this incident that led to Geraldo Rivera’s “Exposing Satan’s Underground” special, and Oprah Winfrey featured one victim’s friends and family on her show.

Specials and instructional videos like Rivera’s were common at the time, even if the problem they were pointing to as an urgent threat to public safety was virtually nonexistent. “In Satanic occultism, that which is good is bad. And that which is bad is good,” says one of them designed to help law-enforcement officers. “As you view this learning and educational tape, pay attention to notice the reverse of everything that is normal becoming abnormal.”

And then there’s this bit from a news segment glimpsed in Lane’s film that points its finger at “D&D”: “We don’t really know how many find unsuspecting dragons in their psychic dungeons. How, then, do we deal with our demons?”

The most notable film featuring this phenomenon might actually be a documentary: Joe Berlinger and Bruce Sinofsky’s “Paradise Lost: The Child Murders at Robin Hood Hills,” the first in a trilogy of films about the West Memphis Three. About three teenagers — Damien Echols, Jessie Misskelley Jr., and Jason Baldwin — who were convicted of the murder of three boys in what prosecutors insisted was a Satanic ritual, it’s a chilling look at people being condemned not on the evidence but on the way they were perceived by their community. (The three were eventually released after spending 18 years in prison.)

The moral panic eventually subsided, but not without aftereffects. “Today, people laugh about the moral panic surrounding things like ‘Dungeons & Dragons’ or backwards masking in music, but the fact of the matter is Satanic Panic ruined people’s lives,” says Greaves in “Hail Satan?”

Another interviewee puts it slightly differently: “The real evil was in the witch hunt itself.”

“Hail Satan?” is now in theaters.

This Article is related to: Film and tagged Hail Satan?, Penny Lane, The Exorcist