With "Boyz n the Hood," he broke down barriers for black filmmakers with Oscar nominations, commercial success, and the creation of an entirely new genre. 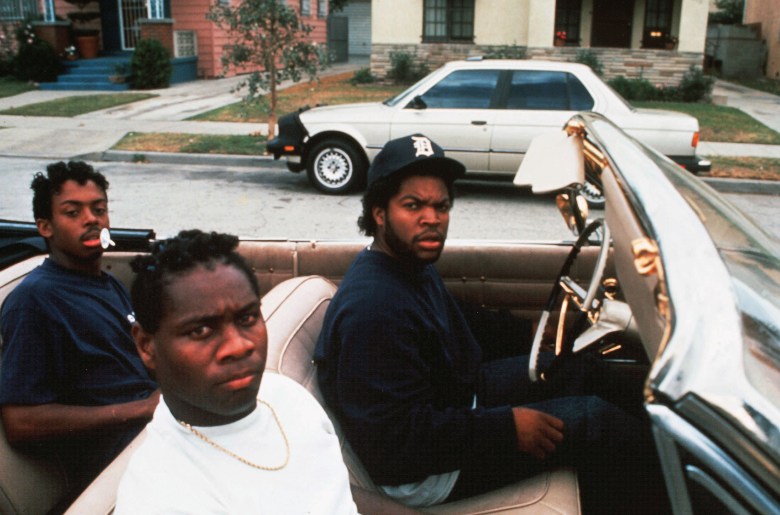 Twenty-eight years ago, John Singleton’s feature debut “Boyz n the Hood” (1991) opened a cinematic window into the bleak realities of life in South Central Los Angeles. It also created something entirely new: While Spike Lee paved the way, “Boyz n the Hood” arguably made Singleton the first studio filmmaker to find mainstream commercial success while representing a little-represented part of society. By tackling a very thorny subject in a way that had rarely been seen in a film of its caliber, it humanized its characters as victims of larger systemic issues rather than stereotypes.

“When we first did the movie, we felt like we was teaching America about a part of itself that they don’t see,” co-star of the film Ice Cube told MTV in 2011. “We was teaching you about people like Doughboy and why he is the way he is.”

In the late 1980s and early 1990s, Los Angeles was essentially a police state with law enforcement on the ground and in the sky. They were constantly on patrol, especially in predominantly African American neighborhoods and partly in response to gang-turf violence. The historic segregation and economic deprivation that created the environment for this violence rarely received mainstream discourse. This fostered a pervasive attitude towards the police by members of this community – an environment in which Singleton was raised, and which served as a catalyst for his film. 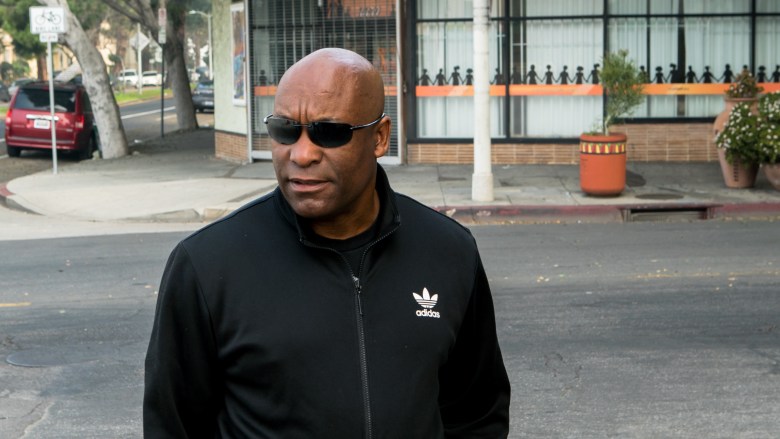 A coming-of-age story set in South Central, the film traces the emotional development of three childhood friends: Tre Styles (Cuba Gooding Jr); Doughboy, his gang-member friend (Ice Cube); and Ricky Baker, a budding football star (Morris Chestnut, in his first feature role). It was one of the first instances of a young black filmmaker tackling the challenging issues of his generation, including the disruption of family, gang wars, and addiction.

The trajectory of the film’s lead character, Tre, resembled that of Singleton’s who, as an unruly pre-teen, was sent by his mother to live with his strict disciplinarian father.

From the start, Singleton insisted that, despite his inexperience, his “Boyz n the Hood” script could be directed by only one person: himself. (He even turned down a $100,000 offer to turn over the script to another director.) Columbia Pictures eventually got behind it and “Boyz” became the first film about L.A.’s “hood strife” with an all-black cast, written and directed by a black filmmaker, and bankrolled by a major Hollywood studio. It effectively gave birth to what came to be known as the “hood film” sub-genre, which went on to include “South Central” (1992), “Menace II Society” (1993), “Juice” (1992), “Sugar Hill,” (1993), “Dead Presidents” (1995), and “Friday” (1995).

As the sub-genre flooded the market, their target African American audience wearied of them. In response, Spike Lee would direct a 1995 drama, “Clockers,” that he said he made to put a nail in the coffin on hood films. And in 1996, the Wayans brothers produced a parody movie, “Don’t Be a Menace to South Central While Drinking Your Juice in the Hood.” However, “Boyz” had already cemented its place in history.

While Singleton was 23 at the time of the film’s release, it displayed a profundity and emotional sophistication that led to its regard as a work of monumental social importance. Its success — $57.5 million on a $6.5 million budget — and critical acclaim (it even screened at Cannes’ Un Certain Regard) gave birth to an industry term: “The Singleton Thing.” That meant works created for a core audience with the potential to cross over into the mainstream. 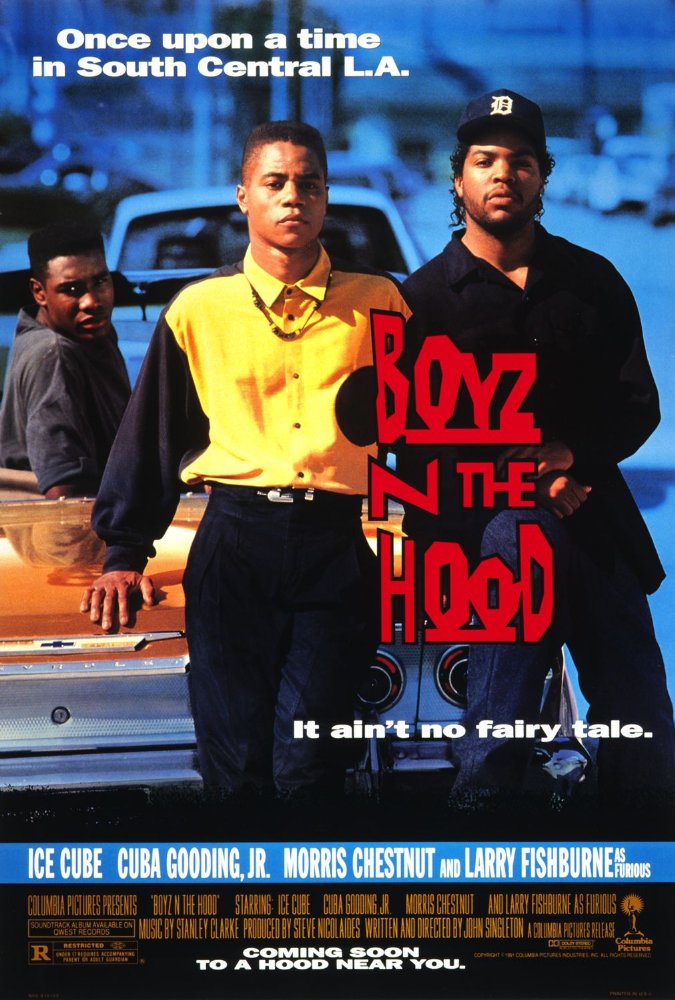 “Boyz” arrived at a time when there was a real hunger for the story it told, and its strong connection to rap and hip-hop culture was integral to its success. Five years prior to the film’s release, late legendary gangsta rapper, Eazy-E recorded “Boyz-n-the-Hood” as his debut single in 1987. Along with fellow West Coast fathers of gangsta rap, N.W.A., the track helped establish “the hood” as an important term in discourse around the lives of young black men and women across the country.

A year later, N.W.A. released “Straight Outta Compton” as its debut studio album in August 1988. Vividly portraying the hood as an environment of constant violence where the threat of danger was commonplace, it introduced a narrative paired with visuals that Singleton would affirm in “Boyz.” The casting of N.W.A. member Cube in his acting debut contributed to the film’s credibility and authenticity among young audiences, while also providing enhanced exposure for hip-hop artists who contributed to the films’ soundtracks.

As gangsta rap went mainstream, it paved the way for the film’s wider acceptance. The budget meant that “Boyz” likely wasn’t considered a huge financial risk for Columbia, but the studio probably counted on it reaching young white fans of rap music as well.

Singleton wasn’t a rapper, singer, or dancer. He was a filmmaker, and “Boyz” was simply the cinematic equivalent of what rap groups like N.W.A had been producing for years, calling attention to an unsustainable reality for people living in South Central, Los Angeles.

Columbia’s marketing team heavily promoted the movie as “authentic,” which ultimately meant certain audiences watched stories of lives they’d never seen before on screen, nor likely gave much thought to. However, the authenticity of “Boyz” was most important in the lives of the young black men and women for whom Singleton made the film.

Released during L.A.’s escalating gang wars, and months before the uprising that followed the acquittal of Los Angeles police officers accused in the Rodney King beating, gang-related violence overshadowed the film’s premiere weekend and a few theaters yanked it. In retrospect, the carnage surrounding the film’s opening only made it seem more timely and profound. And recognizing this, then-California governor Pete Wilson recommended that all Americans watch “Boyz n the Hood.”

The film was nominated for both Best Director and Best Original Screenplay at the 64th Academy Awards, making Singleton the youngest person ever nominated for Best Director and the first African American to be nominated. It marked a pivotal time for black cinema, still in relative infancy. Black filmmakers like Singleton, Lee, and others felt a deep responsibility, motivated by realizing they had opportunities not afforded to those who came before them.

Over the next couple of years, Hollywood opened its coffers to black filmmakers telling black stories, releasing more films by black filmmakers than in the previous entire decade. Studios including “Boyz” distributor Columbia, as well as MGM, New Line Cinema, Warner Bros., and more all had black films in the pipeline. There was a frenzy for black film product that allowed Singleton to continue to direct films set in his native South Los Angeles, many of which tackled inner-city violence and its consequences.

However, while the film helped to spotlight the struggle in troubled locales like South Central, its critical and commercial success ultimately did little to change Hollywood studio thinking. It was a system that was more interested in exploiting the financial potential of a new sub-genre rather than creating real change in the form of a more diverse and inclusive power structure.

In 2002, the United States Library of Congress deemed the film “culturally, historically, or aesthetically significant,” and selected it for preservation in the National Film Registry. Singleton continued to make movies that focused on the black experience, but none would match the critical, commercial, and cultural impact of “Boyz,” a time capsule of Los Angeles 30 years ago, and a perfect example of what can be made within the studio system when outsiders are given the opportunity to express themselves.

Following the recent alleged gang-related shooting death of Los Angeles rapper Nipsey Hussle (a former teen member of the Rollin 60’s Neighborhood Crips, who, prior to his death, was steadfastly working to end gang violence), and the murders of unarmed young black people at the hands of police officers, Singleton’s “Boyz” remains relevant. It’s an indication of just how little has changed in three decades.

This Article is related to: Film and tagged Boyz n the Hood, John Singleton, Oscars