Sandra Oh, Jodie Comer, and showrunner Emerald Fennell weigh in on the changes in the Season 2 premiere. 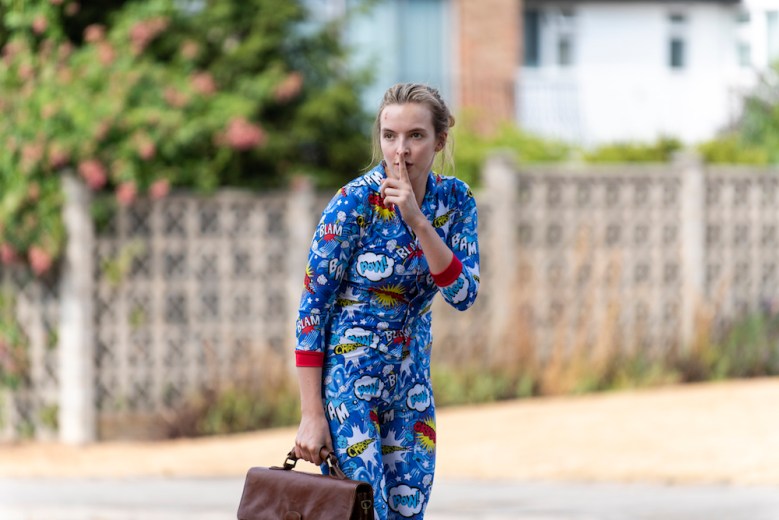 [Editor’s Note: The following contains spoilers from “Killing Eve” Season 2, Episode 1, “Do You Know How to Dispose of a Body?”]

Trust Villanelle to interpret impalement as a declaration of love. In the Season 2 premiere of “Killing Eve,” everyone’s favorite international assassin has conned her way into a hospital, and reveals to her fellow patient that her “girlfriend” had stabbed her.

“She did it to show me how much she cared about me,” says Villanelle (Jodie Comer). “Sometimes when you love someone you will do crazy things.”

The sophomore season of BBC America’s hit thriller picks up a mere 30 seconds after the events of the finale, when MI6 agent Eve Polastri (Sandra Oh) tracks down Villanelle to her flat and stabs her while they’re both chatting and lying in bed. Perhaps Villanelle isn’t wrong about her interpretation of events because the curiously intimate moment is a fairly accurate summation of their chemistry-laden yet unhealthy relationship.

“[In Season 2], it’s still a thriller and what we know for sure is the big bad,” said showrunner Emerald Fennell in an interview with IndieWire. “The bad that we’re interested in is the bad inside Eve and Villanelle and what that relationship, this toxic romance is doing to both of them and eating them from the inside.”

Despite Eve copping to her obsession during that bedroom scene, she’s still in denial that her interest in the killer is anything but professional. It’s therefore ironic later when Eve is mistaken for a substance abuser at the airport, but doesn’t realize that her addiction isn’t to a drug, but a person.

“That is just too conscious,” said Oh. “I think when you are within an obsession or within a relationship or within a dynamic, you don’t really necessarily have the power yet to bring yourself out of it.”

“Or believe that you’re actually in it,” added Comer.

However, the theme of addiction and its effects even plays into how the producers think of Eve’s reaction to the stabbing.

“I always thought, well firstly, how would I feel if I stabbed someone and I had to get home? We were calling it the worst hangover ever,” said Fennell. “So I was like, OK, you got blackout drunk. You’ve woken up in Paris, you’ve cheated on your husband, you’ve got to get home — physically and psychologically. What does sitting on that three-hour train ride to feel like? What does being surrounded by ordinary people thinking you might kill someone, what does that feel like going home, looking at all of your stuff with blood under your fingernails?”

However, Eve doesn’t have time for much introspection or healing, even though she’s clearly shaken enough to cower in the bathtub and keep a chatty salesman on the phone to avoid facing reality. Instead, her MI6 handler Carolyn Martens (Fiona Shaw) has reeled her back in to solve a possible assassination. Their working relationship is an odd one. Although Carolyn often seems pleasant, her attitude on the park bench where they meet is strangely unconcerned.

“There’s even a moment later in the series where somebody says to [Eve], ‘Be careful about thinking that you’re special because we all want to feel special,'” said Fennell. “I think Eve is and Villanelle is [special], but what is frightening, what is nerve-racking is knowing that Carolyn might have had tons of Eves. There may be numerous Eves operating now, there may be people who were Eve two years ago who didn’t make it. So suddenly the sense that the world is much bigger and more complicated and richer and Eve is just part of that makes Carolyn much more frightening to me.” 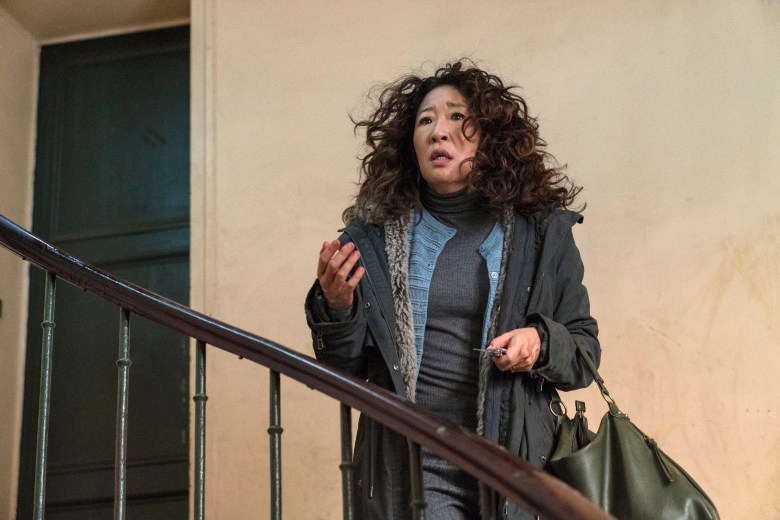 While Eve is distracted by jumping straight back into work, Villanelle finds herself suddenly vulnerable. Not only is she physically weak after getting stabbed, but she’s also without any of her resources. For a woman who surrounds herself with luxury and indulging any whim that occurs to her, to find herself on the run without anything is a shock.

“What we really were interested in looking at this [season] is going back to what it is to be a woman in an extraordinary situation, and that you can’t ignore that there are certain physical limitations,” said Fennell. “But when a person like Villanelle experiences it, it’s very, very distressing. So what was really important to us is that we picked up immediately [after the stabbing] rather than fudge it just to get back into the sexy clothes.”

In fact, there are no sexy clothes in sight, reflecting Villanelle’s state of distress and desperation. But that doesn’t mean that her looks are any less iconic this season. Needing something without obvious bloodstains, she changes into her hospital roommate’s spare set of pajamas in a comic-book-inspired, colorful print.

Comer grew to love that change in attire. “Those pajamas, man. When I first saw the pajamas, I was like oh god, because it was so tight — the elastic material I thought looked so unforgiving. Then actually when I saw them on camera I was like, ‘That’s actually my favorite costume.’”

During another memorable moment in the premiere, Villanelle can be seen reluctantly easing her foot into a pair of white decorated Crocs. The distaste on her face reflects how much the idea of wearing the footwear distresses her. Not only is it unhygienic to wear another person’s shoes without socks, but it clearly offends her sense of fashion. Crocs do not even remotely meet her high sartorial standards.

However, Villanelle’s distaste is an aesthetic one. She doesn’t give any thought to how she’s perceived by others. Their opinions don’t matter.

“That’s the fun of her. I feel like she will throw on the pajamas and she just fucking wears it,” said Comer. “There’s no concern or worrying about what other people think. She just does not care.”

Attired in juvenile PJs and unsightly foam clogs, Villanelle now wants to be reunited with her so-called girlfriend Eve. But first, she must make it to London in one piece. She’s last seen stowing away in the back of a family’s SUV with a wistful smile on her face.

“I think in an ideal world Villanelle would like to live happily in a house with her partner and cook dinner,” said Comer. “I mean, is that too much to ask?”

“That’s also the power of fantasy,” said Oh. “Which also I think is quite a strong theme in the show.”