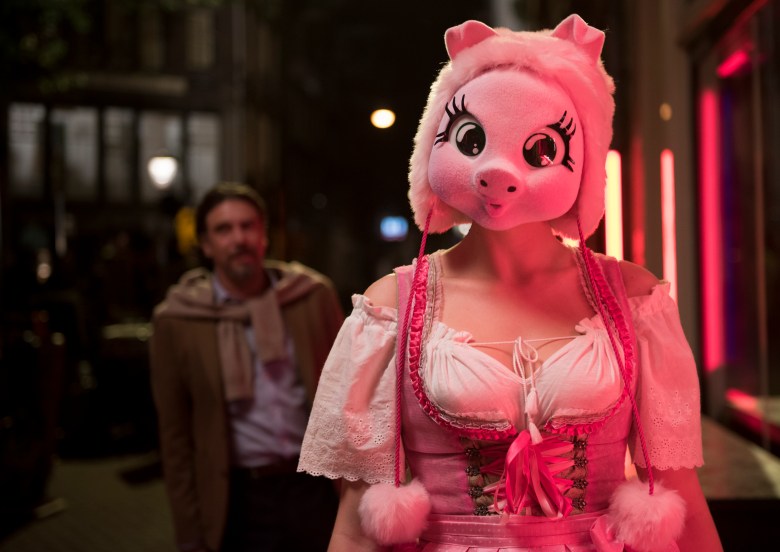 Boredom may be the theme of Sunday’s “Killing Eve,” but the episode is anything but boring. Following last week’s frustrating installment, the show returns to form as it takes a few unexpected turns peeling back more layers of the onion-like psyches of MI6 agent Eve Polastri (Sandra Oh) and assassin Villanelle (Jodie Comer). The show’s flirtation with darkness and yearning has always been its bloody, beating heart, and even though the killer and Eve may still be miles apart, the episode executes a surprise unmasking that will have an affect on both women.

Villanelle in particular is feeling the boredom in Amsterdam, the location of her first freelance assassination arranged by her former handler/now partner Konstantin (Kim Bodnia). Classical art is boring. Scorned wives putting hits on their philandering husbands is boring. Even dressing up as a sexy anthropomorphic Dutch pig girl and gutting a man in front of an audience is just so BORING (for her, but hopefully not the viewers at home).

The thrill appears to be gone for Villanelle, or perhaps everything just pales in comparison to being with or tracking Eve. Meanwhile, Eve isn’t feeling bored at all. It turns out that newest MI6 member and sex-obsessed douchebag Hugo (Edward Bluemel) knows a thing or two about life after all. During a food run, he not only demonstrates a discerning palate when it comes to late-night fried chicken and chips, but also an intuitive understanding of his colleague Eve Polastri (Sandra Oh) and what makes her tick.

As Operation Manderlay closes in on the killer known as The Ghost, Hugo notices that Eve seems “tweaked” and surmises that they share something in common. “I wanted this job for exactly the same reason as you did,” he says. “I didn’t want to die of boredom.” It all adds up. After Villanelle came on the scene, Eve has had an awakening. She’s making rash decisions at work, uncharacteristically smoking cigarettes, and hell — even comes thisclose to kissing Hugo. Eve needs stimulation, and she’s finding it through killers and her own mildly transgressive behavior. 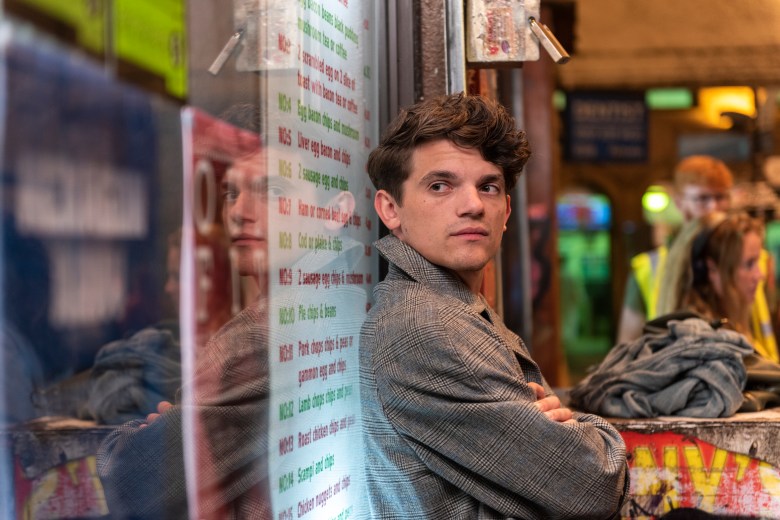 And now she has The Ghost in her clutches. After making a breakthrough about the killer’s idiosyncrasies, they’re able to track her down, and she’s revealed to be… a mild-mannered Korean mother (Jung Sun Den Hollander) of two cute kids. (Kudos to “Killing Eve” for hiring another Korean actress for such a pivotal role. There can be more than one Asian on a show!) Now it’s clear why The Ghost doesn’t want to call attention to herself since that would put her kids at risk. Besides, freelance assassin pay is probably what feeds and clothes them.

The unmasking of The Ghost also gives the show some much-needed momentum, finally propelling the Peel storyline forward. Whatever information that the company is privy to seems fairly big and dangerous if all the people associated with the late Alistair Peel are being picked off one by one.

But The Ghost also presents a problem for Villanelle. Even though she takes Konstantin’s advice and shows Eve “what she’s missing” with the over-the-top murder in Amsterdam’s famed red light district, Eve doesn’t show up. For the second time this season, Villanelle hits a new low — but this time, she’s not at the mercy of a man, but rather at the mercy of her ungovernable emotions. She’s despondent that her “girlfriend” appears to be distracted or ignoring her, and she goes down a self-destructive spiral — taking drugs, lashing out, and ultimately, bawling.

It’s the most emotion Villanelle has ever displayed on the show, and it’s disturbing to see how distraught she is but the apparent rejection. She doesn’t know that it wasn’t Eve’s choice to stay in London. Now, it remains to be seen if this follows the pattern with her previous lovers, both of whom she killed in Season 1. Or, Villanelle could target one of Eve’s coworkers again. Jess (Nina Sosanya) could be in trouble, and she did reveal that she was pregnant, so that would make the situation that much more tragic.

No matter what happens next, this episode certainly feels like danger is building. There is a tipping point coming, and it’s not going to be pretty.

Peel Company: Every detail about the hip tech company is hilariously on point, from the greeter wearing a stylish bomber jacket to Jess drinking out of a mason jar.

Niko’s (Owen McDonnell) neglect: Eve forgets to loop her husband in on their new security detail and then gets defensive about her job. After last week’s blowup, the future of their marriage doesn’t look too promising.

Carolyn’s (Fiona Shaw) interference: Carolyn intercepts the postcard that Villanelle sends Eve and then sends Jess to investigate the Amsterdam murder instead. Carolyn must believe that The Ghost is more important and that Villanelle is a distraction. But what will happen if Villanelle makes a point to become MI6’s priority again?

Butchery and bacon: The painting that Villanelle is so drawn to is “The Bodies of the Brothers De Witt” by Jan de Baen that depicts the barbaric fate of the former Dutch prime minister and his brother at the hands of an angry mob. Villanelle comments, “They look like bacon,” and there are rumors that they mob didn’t just tear the men apart, but they might have eaten parts of them as well. Villanelle is able to maintain this theme when she kills the scumbag husband, who has a noted fetish for barnyard animals. While wearing a pig mask, she strings him up and slashes his belly to mimic the De Witts. Later, Carolyn describes the scene as a “butcher shop.”