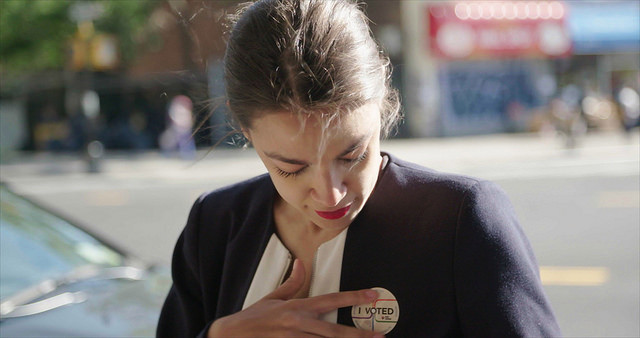 “Knock Down the House”

In news that’s sure to be met with calm, rational discourse, Congresswoman Alexandria Ocasio-Cortez is already the subject of a documentary. She isn’t the only one featured in “Knock Down the House” — Amy Vilela, Cori Bush, and Paula Jean Swearengin all receive pride of place as well — but Rachel Lears’ film has nonetheless been perceived as “the AOC documentary” since its Park City debut earlier this year. Watch the trailer below to see how that isn’t entirely accurate.

“If I was a rational person, I would have dropped out of this race a long time ago,” AOC says as the trailer opens, later saying that “Americans aren’t asking for a lot. They’re just asking for politicians to help them get by.” The other three women running for Congress are no less determined, and their reasons for doing so are even more moving.

Here’s the synopsis: “Four exceptional women mount grassroots campaigns against powerful incumbents in ‘Knock Down the House,’ an inspiring look at the 2018 midterm elections that tipped the balance of power. When tragedy struck her family in the middle of the financial crisis, Bronx-born Alexandria Ocasio-Cortez had to work double shifts as a bartender to save her home from foreclosure. After losing a loved one to a preventable medical condition, Amy Vilela didn’t know what to do with the anger she felt about America’s broken health care system. Cori Bush, a registered nurse and pastor, was drawn to the streets when the police shooting of an unarmed black man brought protests and tanks into her neighborhood. A coal miner’s daughter, Paula Jean Swearengin was fed up with watching her friends and family suffer from the environmental effects of the coal industry.”

In her review of the film, IndieWire’s Kate Erbland called it “an immediate and engaging look inside a system so many newbies are eager to mold into a fresh vision, bolstered by the star wattage of a newly minted political powerhouse.”

“Knock Down the House” premiered at Sundance, where it won both the Audience Award: U.S. Documentary and the Festival Favorite Award. It premieres on Netflix next Wednesday, May 1.

This Article is related to: Film and tagged Alexandria Ocasio-Cortez, Knock Down the House, Trailers