Green's latest, "A Thousand Thoughts," tells the story of the Kronos Quartet, with the musicians playing alongside his film. 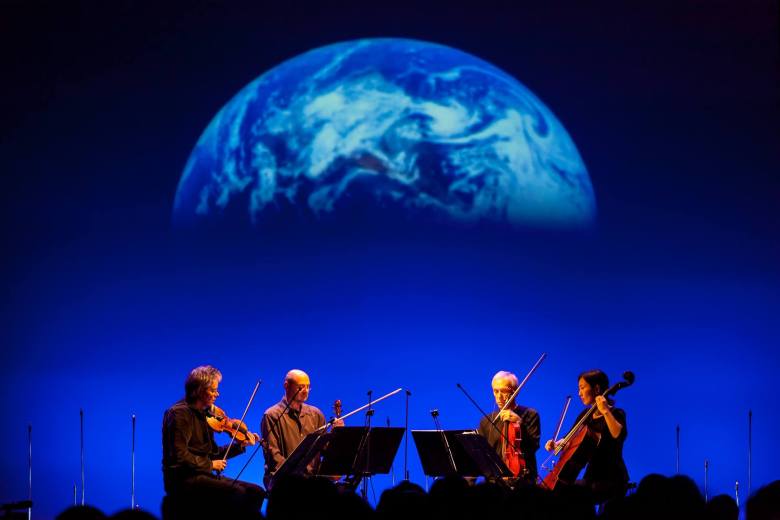 It’s a movie-going experience that’s hard to explain to anyone who hasn’t previously seen one of nonfiction filmmaker Sam Green’s live documentaries. In his latest piece, a collaboration with the Kronos Quartet entitled “A Thousand Thoughts,” the big screen plays home to interviews and archival images that audiences would expect to see in a traditional documentary. On stage, the Kronos Quartet appear live to perform the film’s score, while Green himself narrates the film.

Green has made traditional documentaries before, like “Weather Underground,” but his live projects have been entirely conceived of and executed as purely as live events. Not only will “A Thousand Thoughts” never be available on Netflix (or anywhere else), it’s the nonfiction streaming boom that inspired Green to create these unique theatrical events.

“I’m thrilled that these days you can see so many documentaries and so many great documentaries,” Green said in an interview with IndieWire. “You could watch a great documentary film 24 hours a day for weeks, if you wanted to. It’s all accessible now, and that is great, but at the same time, I think that there’s something about that that lessens the value of the experience, the significance of the experience. It’s like going to an all-you-can-eat sushi buffet.”

Of course, the tradeoff to being so much less accessible than traditional films is that far fewer people will be able to see Green’s live films. Even a tremendous run of 50 sold-out performances in 1,000-seat venues puts the ceiling at an audience of 50,000. And yet the economics of live documentaries have turned out to be surprisingly sustainable for Green.

“Doing live events is a completely different economy than making traditional films,” said Green. “There are some documentary films where the filmmaker makes a good amount of money, but it’s not super-common. But with music and live events, people get paid differently… and it’s actually much better, to tell you the truth.” 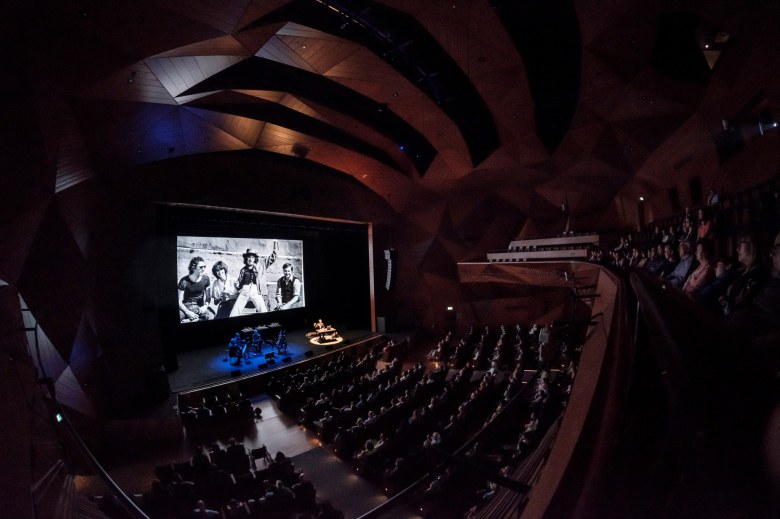 Green has taken on the role of booking venues himself, working closely with the touring and booking teams behind collaborators like Yo La Tengo and the Kronos Quartet, which helps create opportunities and ticket sales. Green has also built a following and reputation, which leads to full venues and healthy revenue for one-time performances the tend to sell for approximately $25 a ticket.

While Green is “on tour” (two shows this month) with “A Thousand Thoughts,” he is still booking a few performances a year for his previous live films like the Guinness Book of Records-inspired “The Measure of All Things” and his ode (alongside Yo La Tengo) to a twentieth-century futurist in “The Love Song of R. Buckminster Fuller.” While it involves some travel, the shows pay well and help sustain Green while he works on a handful of new projects.

“I’m working on a film about the oldest person in the world, which is a kind of long-term project where it’s filming each person who is that, the oldest person in the world,” said Green, who received a Sundance Art of Nonfiction fellowship this year. “And then I’m making a piece for the Whitney Biennial, a live cinema piece that will show in August, while I’m starting a few new things — some of them are live cinema and some of them are not, but it all is exciting.” 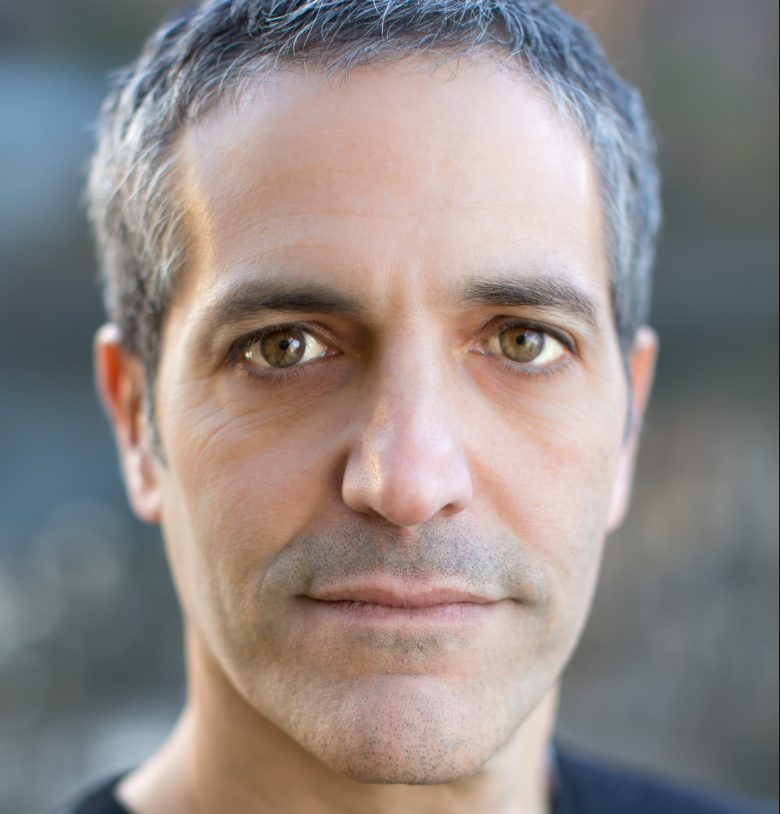 While performing the live docs is something that Green can easily balance with his other films, the act of making them can be just as demanding as any other feature nonfiction film. After working with the Kronos on a traditional short film about the band’s history, the door was left open to do something in a longer form.

Green didn’t want to make the standard music doc, but interestingly, it didn’t dawn on him — at least at first — to make a live documentary with the group. Months passed before he started to see a way of using the group performing their music as a way of telling its remarkable 40-year history.

For “A Thousand Thoughts,” Green did something else new: he shared his directing credit, working with Lynne Ramsay’s long-time editor Joe Bini. All told, the pair worked together for nearly a year and a half to put the project together.

“In many ways, it’s put together like a normal movie,” said Green. “We sat and wrote, and the way I work is, I literally edit it like a normal movie. I record my voiceover and use pre-recorded music and then the images that we’re working with, whether it’s archival footage or interviews. … The difference is you’re anticipating that it’s going to be a live piece and live pieces work differently than a traditional film. So you kind of are editing and putting it together, but with an eye to that fact, that things will work a little differently.”

After getting feedback from the Kronos, Green rehearsed with the musicians leading up to the piece’s premiere in January at Sundance. 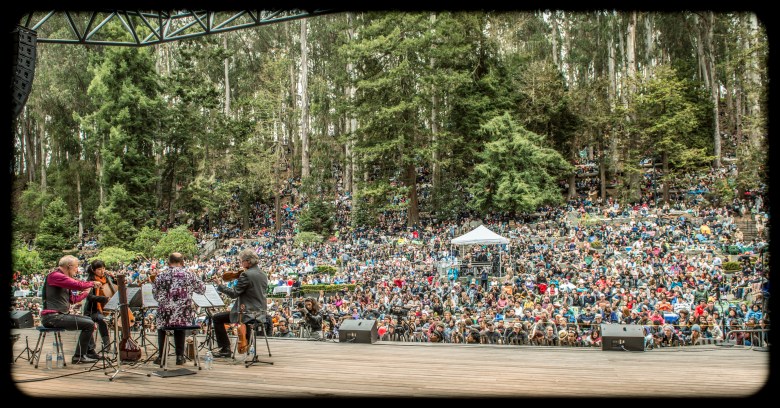 “The weird thing with a live piece is you really don’t know what it is until you are in front of an audience, a real audience,” said Green. “None of us had any idea if it’s going to be too long, is it too short, does it make sense, is it boring, does it work? So we all went to Sundance not knowing any of that, and I think with a regular movie, you have some sense. It’s not so mysterious.”

After the well-received Sundance premiere, few adjustments were made, and the show was ready to hit the road. Before hitting the stage on Thursday night at Town Hall in New York City, there will be a two- to three-hour run-through.

What amazes Green during the pre-show rehearsal is how the Kronos will still tinker with their music, even with a live performance looming. “They’ll just noodle over these pieces they’ve played for 40 years, and it’s pretty remarkable,” said Green. “It’s great to see, I love it.”

“A Thousand Thoughts” will be performed at The Town Hall in New York City, on April 25 at 8PM.

This Article is related to: Toolkit and tagged Documentaries, Documentary Film, Sam Green, The Live Documentary