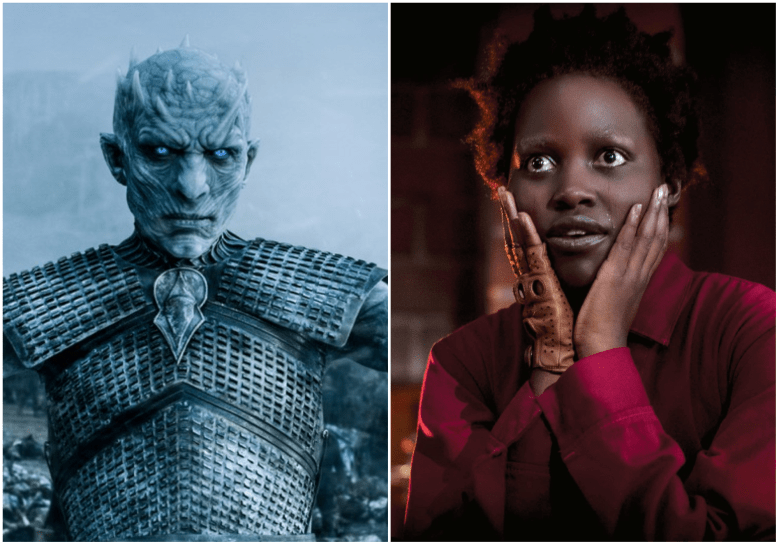 Like millions of other people, Lupita Nyong’o spent part of her Sunday thinking about “Game of Thrones.” Unlike most other fans of the HBO drama, however, she has some insights as to how the show’s White Walkers compared to the Tethered from “Us,” in which the Oscar winner stars as a both a mild-mannered mother of two and her own doppelgänger.

Nyong’o compared and contrasted the two different kinds of villains in a Twitter thread. Here’s what she came up with in terms of their similarities:

And then there are the differences:

After merely being hinted at for quite some time on “Game of Thrones,” the White Walkers have emerged as an inexorable force whose power only grows each time they win a battle and turn their former opponents into their own undead soldiers. The existential threat they represent is expected to come to a head on tonight’s episode of the show, which will run 82 minutes and feature the long-awaited Battle of Winterfell.

Previewing the episode, Emmy-winning director Miguel Sapochnik said that “the siege is a 40-minute sequence, but it’s actually three different battles in three different places intercut. That was the biggest thing I could think of that was contemporary. I was trying to get a sense of when do you tire out. I think we’re going to blow past that. It feels like the only way to really approach it properly is take every sequence and ask yourself: ‘Why would I care to keep watching?’”

In response to Nyong’o’s thread, BBC News Africa’s Twitter account responded by asking the actress who she thinks will take the Iron Throne when all is said and done. She responded with the only correct answer: “Well the world is safe with Lady Mormont obvs.” The Lady of Bear Island approves.

Coming to think of it, the Tethered (#UsMovie) and the White Walkers (#GameOfThrones) have quite a bit in common:
1. They come in silence but not in peace
2. They won't stop until they kill errrrrrrrrybody
3. They wear block colors pic.twitter.com/skChsjmZfW

This Article is related to: Film and tagged Game of Thrones, Lupita Nyong'o, Us