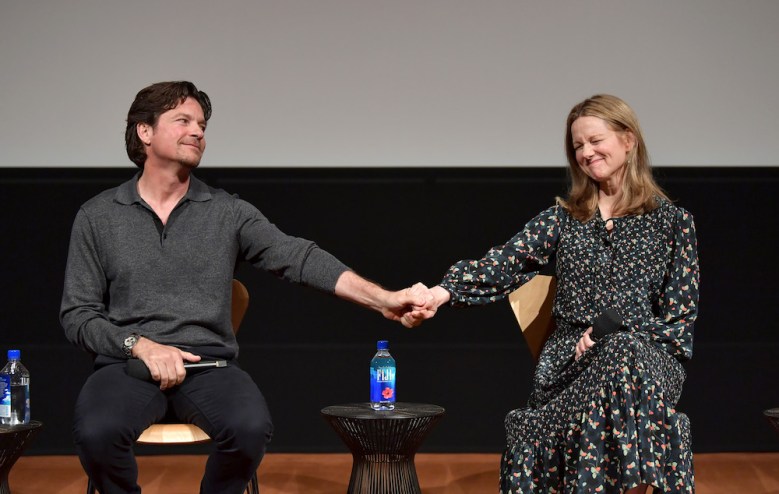 When asked to tease “Ozark” Season 3 in one word, Jason Bateman first tried to punt to his executive producer. “Chris [Mundy] is the man to ask,” he said to a room full of Emmy voters Sunday night in Hollywood. As Mundy, the writer, creator, and E.P. of Netflix’s award-winning drama thought over his answer, biding time to avoid spoilers, Bateman came up with his own one-word tease: “Wendy,” he said.

Wendy is the Byrde family matriarch played by Laura Linney, who was also in attendance for the screening, panel, and party. Her role has only grown in prominence and importance over the first two seasons, as the former suburban family’s Missouri-based money laundering operation has expanded, so hearing she might have an even bigger part to play is expected, yet still exciting. Linney, a four-time Emmy winner and five-time nominee, merely laughed at the answer.

Then Mundy offered his own 85-word tease for Season 3.

“The third season to us is [about] what keeps you safe and whether or not hiding keeps you safe or attacking keeps you safe,” Mundy said. “In other seasons — between Season 1 and Season 2, certainly — we sort of left with a whole lot of plot we needed to answer, and we intentionally didn’t leave ourselves with a whole lot of plot to answer for in Season 3. So it’s more emotional within; we write everything through the marriage. So for us, it’s all about that marriage.”

Later, Bateman said, “It’s not all sunshine and roses in a marriage — except mine,” referencing his 18-year partnership with Amanda Anka. That’s all the foursome said about Season 3’s story, but Bateman also confirmed he would be back to direct the first two episodes, and no more. In the first season, Bateman helmed four of the 10 episodes, while the increased workload of producing, starring, and directing forced him to take only two episodes in Season 2. In addition to “Ozark,” Bateman is directing the first two episodes of HBO’s Stephen King adaptation, “The Outsider.”

Production on “Ozark” Season 3 is set to begin in “a few weeks,” per Bateman. Season 1 debuted at the end of July, 2017, while Season 2 hit Netflix in August 2018. No release date has been given for Season 3, though the production timeline would put them on schedule for a fall release.

“Ozark” is expected to be a major Emmy player in 2019. Though Season 1 only snagged five nominations and was shut out of the Best Drama Series race, Season 2 is facing lighter competition and has gained traction via other awards. Bateman won the Screen Actors Guild Award in January, and the series earned its first Best Ensemble nomination then, as well. He also earned the show’s first DGA Award nomination, while the series scored well with the Writers’ and Producers’ guilds (earning nominations in both).

Sunday night’s packed house responded well to the opening episode screening, laughing more than one might expect for a gritty drama series and sticking around well-after the panel to ask the cast and creator questions during a small reception.

“Ozark” Seasons 1 and 2 are streaming now on Netflix.