Camille Vidal-Naquet met many Paris street hustlers for his film, which takes a radical departure from most depictions of sex work. 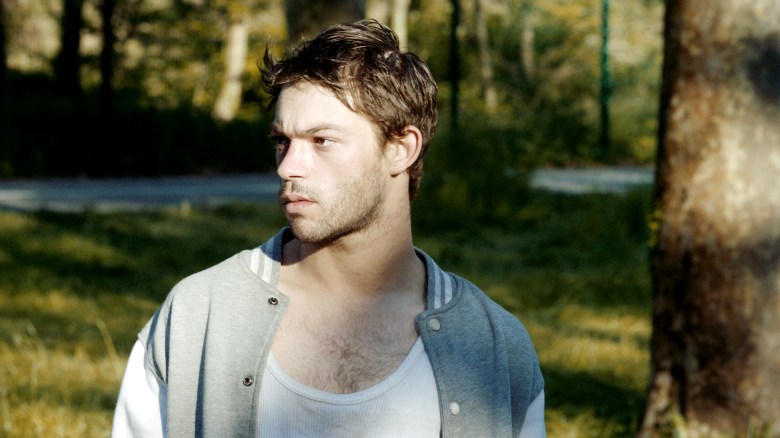 In the opening scene of “Sauvage/Wild,” a routine check-up turns suspect when a doctor offers to relieve his patient’s tension down below. After a hurried hand job, money changes hands, revealing the true nature of the interaction. Before parting, the customer asks for a kiss. “Next time,” replies Léo, (though his name is rarely mentioned), embodied with a balance of rough-around-the-edges swagger and childlike vulnerability by Félix Maritaud (“BPM”). Aside from one night snuggled up to a lonely old man, this is one of the mildest interactions in the film.

Léo’s days are comprised of one sordid, desperate chapter after the next, with very little respite. He follows around a fellow hustler like a puppy dog, and the man returns his affections with a punch to the face. Léo’s health is deteriorating, some rough clients stiff him, and he’s happiest when he’s smoking meth. And yet the film is gripping from start to finish — so wholly immersive is Léo’s day to day that each tragic-seeming encounter quickly transforms into a kind of banal routine. Léo doesn’t want to change his circumstances, so why should we want that?

“Sauvage/Wild” forces each viewer to confront their biases, challenging them to suspend judgement. Director Camille Vidal-Naquet’s startling debut reflects his years of research, which included immersing himself in the world of homeless street hustlers.

“We have this tendency of talking about something we don’t know by categorizing it. Saying, ‘Oh, the prostitutes, they do this and that.’ But it doesn’t exist,” Vidal-Naquet said in an interview ahead of the film’s release. “These persons might be homeless or prostitutes, but it doesn’t change the fact they’re individuals with their personalities and so there is no answer. … It’s very important to understand that to avoid passing any judgment.”

The filmmaker initially planned a few visits to Bois de Boulogne, a Paris park with a wooded section frequented by sex workers and their clients. Weeks turned into months, and months turned into years, and he soon found himself invested in far more than research for a film.

“They might have nothing, [but] they still have their voices. They can still speak up for themselves,” said Vidal-Naquet. “I was amazed by how strong these persons are, how solid they are.”

While the director embedded himself in their world, Maritaud preferred his own interpretation of the character, choosing to rely solely on the script.

“My character is kind of an outcast. I don’t feel like he’s doing prostitution only for survival issues…and I didn’t want it to have a judgment as myself,” the actor said. “I have a political view on prostitution, but I wanted to keep him like [a] virgin from every conception I have in my own life that comes from education, that comes from society.”

The most radical thing about the film is that it gives Léo agency. When his hustler friend spits out that he “likes being a whore,” he shrugs in ascension. So what? It’s a departure from the survival sex work narrative started by “Midnight Cowboy,” of which ”Sauvage” is a distant descendant. Even “Tangerine,” a breath of fresh air in the sex worker film canon because of its lighthearted tone, treats sex work as an unfortunate means to an end, something bad to be escaped. By the end of “Sauvage,” Léo chooses his freedom. It’s ambiguous whether or not he returns to hustling, but one thing is clear — he returns to himself.

Rather than write a backstory or study real sex workers like Vidal-Naquet did, Maritaud stripped himself down to the bare essentials, relying on instinct and physical sensation to craft a truly transformative performance. (In person, Maritaud is lively and warm — a far cry from the lost boy in the film). He is onscreen for the entire film, caked in just enough dirt to appear naturally haggard. Even as Léo’s health fails and exhaustion finally sets in, there is still what Maritaud calls “this vibration of love” inside him.

Vidal-Naquet swings big in his conclusion, dangling the possibility of a comfortable life for Léo before pulling the rug out. Anyone paying attention would be foolish not to see it coming. From the film’s point of view, the best thing Léo can be is entirely free — from society, from a nice older guy, from material possessions. As he sprints from the airport where he used to get high, Léo peels off his nice button down shirt, and the cleaned up conformist quickly gives way to the creature of instinct. Once he is finally alone in the woods, he curls up in a ball on a bed of grass.

“What moved me is that ability he has to rejoice from very simple things as in nature, trees, leaves, and it was interesting to see him in the end soothing, in a soothing place, feeling good because he’s untamed,” said Vidal-Naquet. “I thought it was interesting to see…this energy of him going away, escaping. And you don’t know exactly why, and I think it was an element of mystery to see him like this.”

“He is the only one that can choose for himself,” added Maritaud. “That is his biggest strength that he has the ability to make his own choice as an absolute choice. Like he can’t be owned by somebody, he’s just making his own life and he feels comfortable with it.”

“Sauvage/Wild” is playing for two weeks at New York’s Film Forum, from April 10-23.