Lori Loughlin and Michael Avenatti are there, too, so at least he's not lonely. 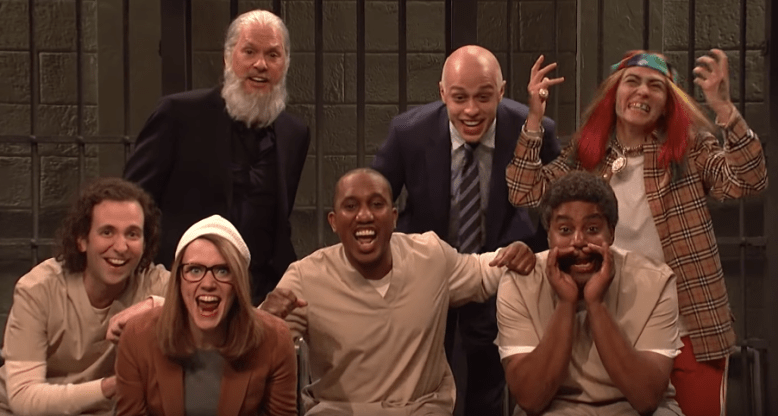 With Alec Baldwin’s Donald Trump nowhere to be seen, “Saturday Night Live” featured a different cameo during last night’s cold open: Michael Keaton, who played the recently arrested Julian Assange. He was joined by Kate McKinnon’s Lori Loughlin, who interrupted three jailbirds’ stories of how they ended up behind bars to brag, “You think that’s insane? I paid $500 grand to get my daughter into USC.”

Met with incredulity by her new cellmates, the former Aunt Becky repeated herself: “You heard me. I paid $500 grand to a women’s crew coach to say my daughter was good at rowing. I’m loco.” Loughlin then reminded them that the hefty sum is “not even including the $300 grand I blew on tuition” before stunning them even further by revealing that, not only is her daughter a Communications major, but she’s put that ongoing education to use by becoming, of all things, an Instagram influencer.

“You think prison is hard? I’ve done 68 Hallmark movies — I’ve seen hell, man,” she said. “And in half those Hallmark movies, I marry Santa’s son, so I have lost all sense of reality. I’m gonna take your heart and I’m gonna cut it out.”

Aunt Becky may be the prison’s new kingpin, but she isn’t the only high-profile inmate. Pete Davidson is there as Michael Avenatti, but even his crimes can’t compare to the craziness of Assange’s. “That’s right, it’s me,” he said by way of introduction. I’m the architect of anarchy. I’m the king of chaos. I’m the scourge of the cleaning staff at the Ecuadorian embassy.”

They aren’t impressed yet, so he takes it further: “I’m wanted in the U.S. and Sweden. I’m from Australia and I live in London in Ecuador — you try figuring that one out.” Then the capper: “I attacked the U.S. military, bitches. I’m an actual James Bond supervillain — and I’m one step away from destroying the goddam moon!” Watch the full skit below.