LSD helps him L-S-see movies like "Dumbo" and "Captain Marvel." 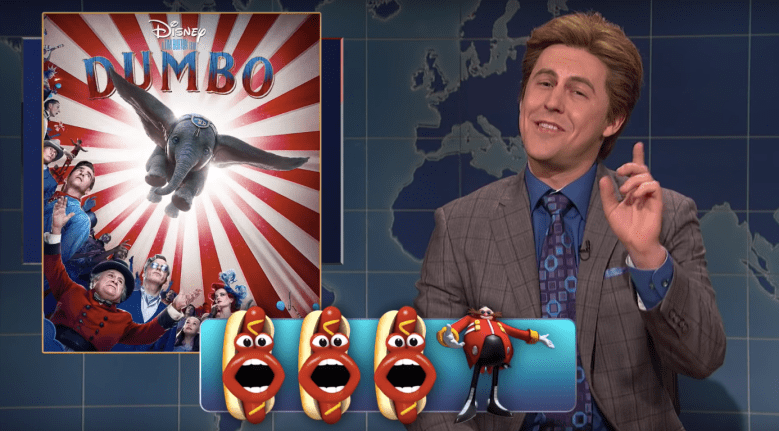 “Saturday Night Live” has a new film critic, and he’s here just in time for spring. Terry Frink (Alex Moffat) debuted on last night’s edition of Weekend Update, and he came prepared by watching every movie coming out in the next few months — “and I couldn’t have done it without a little health trend called macrodosing,” he told Colin Jost before launching into his LSD-inflected opinion of “Captain Marvel.”

“No surprise here: This film is a marvel of cinema,” Frink began. “However, I can’t say I love the climax of the film, in which Captain Marvel turns into a bat and has sex with my high school gym teacher — but it’s still the best movie I’ve ever seen.”

“Ain’t nothing ‘micro’ about these doses, hoss. LSD helps me L-S-see all these wonderful films,” Frink replied confidently. “Now, let’s talk ‘Dumbo.’ With big ears and an even bigger heart, ‘Dumbo’ is a terrifying journey through hell. A mostly garbled mess of colors and shapes, this bizarre remake of Bryan Cranston’s ‘Trumbo’ never quite finds its footing — but, just like an elephant, you’ll never forget its touching jihadi message. I couldn’t stop crying or laughing or sweating or biting the fella next to me. I give it three screaming hot dogs and one Dr. Robotnik.”

Frink wanted to move on to “A Star Is Born” next, prompting Jost to point out that the film came out months ago and thus wasn’t suitable for inclusion in the spring preview. “Oh, Colin,” he responded. “You still believe in time? There’s nothing shallow about Bradley Cooper’s performance as a pockmarked speed freak trying to smooch me in a Penn Station stairwell.”

“At 14 days without sleep,” he went on, “the film is a tad long, but I still give it two ketchup packets and 36 missed calls from my wife.” Watch the full, bizarre skit below.