The Oscar winner's fourth appearance as host changes things up, just because it can. 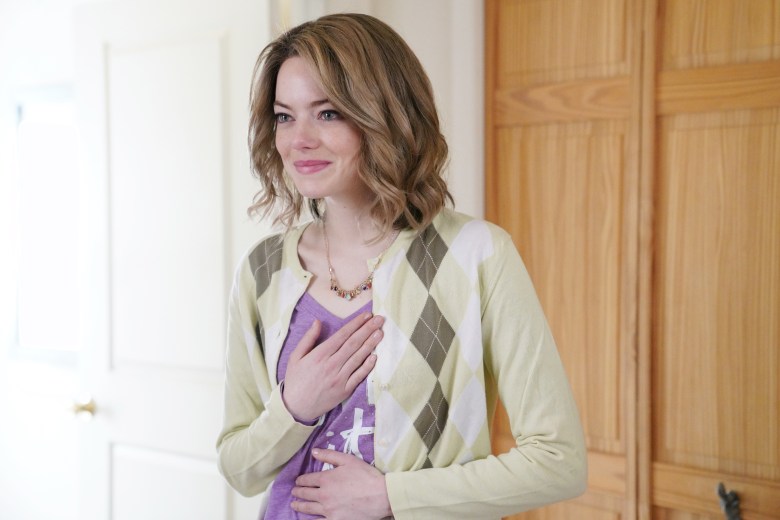 For all of recent “Saturday Night Live’s” faults, the series deserves a pat on the back for working harder lately to book more first-time guest hosts and even musical guests, like K-Pop phenomenon BTS here, who, thanks to the studio audience, you can clearly hear has quite the following. But now it’s time to go back to a celebrity guest who certainly knows their way around the “SNL” hosting game, Emma Stone. As mentioned during the opening monologue, this “SNL” episode marks Stone’s fourth time as a host (fun fact: she’s also appeared as herself in two other episodes as a special guest). In case you didn’t know, that’s kind of a big deal.

In one of the better and more original guest monologues in recent memory, after telling the touching story of how important “SNL” is to her and her family — something she has talked about before, especially when it comes to her love of Gilda Radner — Emma Stone seemingly gets it into her head that the big “SNL” milestone is the “Four Timers Club,” not the “Five Timers Club.”

There are a number of sketches in this episode that really fall into the “What just happened here?” category. But “Ladies Room” is like “80’s Music Video” before it, in that you can’t help but wonder exactly what series of events occurred in order to get it into at least one writer, cast member, or even the host’s head to do a sketch inspired by a niche ‘80s music video. And Klymaxx’s 1985 single “Meeting in the Ladies Room” is even more niche — and was certainly in the VH1 Classic rotation less — than Oran Juice’s “The Rain.” Shame what happened to Club Vortex. And that fitting room in the Limited Express. And the grammar genius who allowed it to be “Ladie’s Room” in the original music video.

The surprise of seeing a full-on Melissa Villaseñor sketch in this episode is also a matter of asking what just happened, although, like the “Dorm Room Posters” sketch in the episode, it’s the result of a past Emma Stone episode: The last time Emma hosted, it was Melissa’s first season. That was back in season 42, and now look at Melissa Villaseñor… Well, she’s nowhere near the focus of the show that Mikey Day and Alex Moffat (who joined that same season) are, as it’s a surprise she gets a whole sketch to herself with the celebrity host. But it’s a pleasant surprise that’s pretty much like the tonal opposite of Natalie Portman’s “Natalie’s Rap,” complete with “sexy Melissa things” like smelling her books, talking like Gandalf when she wakes up, cooking for one, and hugging her backpack.

Then Emma Stone chimes in with her hobby, and the only disappointment in that is that her “I’m gonna rap now.” doesn’t lead to something as epic as her all-time great “Tonight Show” Lip Sync Battle.

Best Sketch(es) of The Night: “Fashion Coward” & “The Actress”

Surely plenty of people will be able to sue “SNL” for calling them out the way it does in the “Fashion Coward” sketch, especially when it comes to the button: “Fashion Coward: It’s just Ann Taylor.” Really, this sketch is pretty rapid fire with its great lines, with Cecily Strong doing that work as the voiceover woman, while Stone, Aidy Bryant, and Kate McKinnon do the work as the poor fashion cowards. “And we don’t sell swimsuits. You know why.” You absolutely do. The only knock against this sketch is that Ego Nwodim and Heidi Gardner don’t get a spin-off sketch that delves more into their lives as models.

Here’s the thing: A follow-up to the “Posters” sketch was absolutely unnecessary, which instantly makes it the weakest sketch of the episode. But this is one of those cases where “worst” doesn’t necessarily mean bad. The original sketch first appeared in Emma’s third hosting gig, with her playing the “hot girl” Krissy Knox there as well. But this sequel sketch actually improves upon the original, both with all the other poster characters’ annoyance (especially Ego Nwodim’s Jaguar) and how much more annoying the voice manages to be. Plus, there’s the bonus of her twin sister Brandi Knox. The very sketch concept and format isn’t anything stellar, but Emma Stone truly gives her all here and it always garners a laugh. (Unfortunately, this episode doesn’t have a sequel to “Cleaning Crew.”)

The return of vlogger Prince Harry (Mikey Day) is much easier to genuinely classify as in the “worst” sketches category, although, Emma Stone also boosts this sketch with her performance. Harry’s drunk ex-girlfriend Tinsley is the highlight of the sketch and the most original part of it… other than Pete Davidson playing Ringo Starr to bust out a patented “peace and love,” that is.

Between her standing Sarah Huckabee Sanders and now Meghan McCain, Aidy Bryant might just need to play every politician’s adult child. And the Meghan McCain thing is somehow even more perfect, which didn’t seem possible until now. (Impression-wise, that’s unfortunately not the case for Kate McKinnon’s Joy Behar. Not a “So what? Who cares?” at any moment in the sketch?)

Look: This episode belongs to the women. The Best Male Performer would have gone to Mikey Day — specifically for his appearance on Weekend Update — but considering his role in and contributions to the two weakest sketches of the night, it just felt wrong to give him the win. Emma Stone, on the other hand, rocks the episode, to the point that she has an entire sketch (a pre-tape, “The Actress”) she carries pretty much on her own (Beck Bennett, as the porn director, is the only cast member around) and it doesn’t feel off or like she needs to be rescued. If there’s a way to transfer Emma Stone’s “La La Land” Oscar into an Oscar for this*, please, make it happen. Emma Stone was basically coming for Aidy’s crown in this episode.

(*It’s not that Emma Stone doesn’t deserve an Oscar, it’s just that it shouldn’t have been for “La La Land,” despite being the best part of the movie, and she should’ve gotten it for “The Favourite”… yes, as lead, not supporting. This is a conversation for another time.)

For the love of Lori Loughlin: In some ways, the greatest thing this episode does is change things up in the cold open, using it for something other than a completely political sketch. And with Emma Stone’s “Birdman” connection, it leads to a new (read: not tired) celebrity cameo in the form of Michael Keaton as Julian Assange. He makes a “Batman” (1989) reference, and the BTS-loving crowd doesn’t pop for it, but it’s still better than the “woo”s that come with an excruciating Alec Baldwin Trump “impression” or a terrible Robert De Niro cameo. And from that point on, the episode wasn’t quite the same as it ever was: a Melissa sketch, more to do from Ego Nwodim, “The Actress.”

And because this cold open isn’t the same thing it is every week, and the episode itself doesn’t go too hard on the political “jokes,” Weekend Update actually comes across as fresher and more entertaining. No, Braun Strowman doesn’t show up to make sure Colin Jost and Michael Che get these hands one more time, but there is the introduction of a new Weekend Update feature in the form of Day and Heidi Gardner’s Instagram couple.

None of this episode’s sketches top “I Broke My Arm” from Emma Stone’s first episode (or even “High School Theatre Show,” a recurring sketch that has been missed, from her third), but Stone’s enthusiasm for “SNL” is always apparent. And this can’t be taken for granted: Despite her obvious enthusiasm and true love of “SNL,” she never trips over her lines or gets too nervous. That’s not just something that comes from being a multi-time host, that’s something that comes with an ability and a comfort in doing live performance, which Stone clearly has.

One final note: Cecily Strong yelling “Get out of here, Italian bitch!” at Emma Stone during the impressively bizarre “Chalmers Reserve Event Wine” sketch deserves to be played on a loop somewhere. Perhaps during Emma’s Oscar reel for “The Actress.”