DeWanda Wise and Brittany Snow sparkle as supporting players in a Netflix film that doesn't know what it wants to be. (Hint: it should have just been a TV series.) There are plenty of great someones in Jennifer Kaytin Robinson’s directorial debut “Someone Great.” These include star Gina Rodriguez, who mines richness from a thin character, and standout supporting turns from DeWanda Wise and Brittany Snow as BFFs who similarly turn tropes into characters with staying power. And yet the shaggy Netflix comedy lacks much beyond stellar performances, as a messy narrative structure and force-fed pop cultural commentary instantly dates it. While the latest Netflix-produced rom-com struggles to decide what it wants to be, it seems clear from the outside — this should have been a TV series instead.

Ironically, Robinson is best known for creating the short-lived MTV series “Sweet/Vicious” — which centered on an unlikely duo who team up to enact some vigilante justice on the world — and, if there was any justice in the world, she’d still be making it. The wit of Robinson’s series still occasionally peeks out in “Someone Great,” especially when her central trio are interacting, but smushed into a 92-minute running time, little of the best bits can actually breathe.

And that’s to say nothing of Robinson’s strange choice of an inciting incident to kick off the film’s action: the heartbreaking separation of Jenny (Rodriguez) and Nate (Lakeith Stanfield), which throws both Jenny’s BFFs Erin (Wise) and Blair (Snow) into a tailspin while all but ruining what should have been a great time in Jenny’s life. Jenny and Nate have been together since college (the ladies have been there somewhat longer) and, over the course of nearly a decade together, they’ve devolved from passion into passivity and perhaps something more painful. When Jenny gets the chance for her dream job, she jumps at it, never anticipating that Nate will not want to make the cross-country move required of his partner, instead opting to stay behind… single. 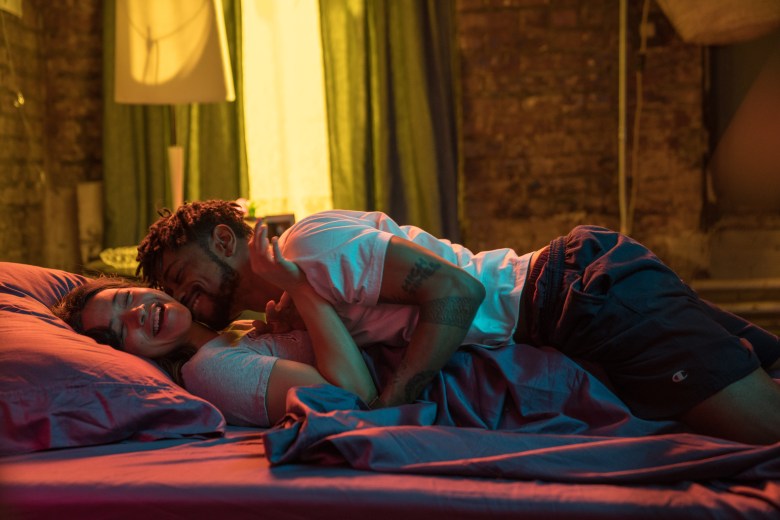 All of this is delivered via a dizzying opening sequence, in which the entirety of Jenny and Nate’s relationship is played out through onscreen graphics depicting everything from Gchats to text messages, emails to Instagram. Rodriguez and Stanfield are quite cute together — and thank goodness for that, because viewers are also expected to sit through a never-ending series of flashbacks to their relationship, even when we already know it’s over — and Robinson opts to keep present-day Nate mostly removed from the action, all the better to make it hit when he does appear.

But she’s also trying have it both ways: picking up her film over nine years into their relationship with one major incident, yet still wanting to build out its deeper meaning through constant flashbacks and that mess of on-screen graphics. Even worse: the real heart of the film is the bond between Jenny, Erin, and Blair. Nate and Jenny and their problems are just a flimsy way to enter into that dynamic, instead of trusting that the story of this particular trio is good enough to warrant its very own narrative.

Drunk on her own misery and a lot of tequila, Jenny demands to go on “one last epic date with my girls” before she leaves New York for San Francisco, setting the gals out on a zippy day-long adventure that finally taps into its shaggy style as feature, not a bug. Intent on doing some last-ditch activities before she heads to the West Coast (and perhaps running into Nate along the way), Jenny, Erin, and Blair alight on a wild crash course through the city.

For all the fun the trio have together, with a visit to a stranger’s apartment that includes the film’s single most uproarious monologue (care of rising star Jaboukie Young-White), Robinson constantly bogs the film down with more revelations, more secrets, and more messes to fix. Jenny may have her own issues, but so do Blair and Erin. “Someone Great” attempts to both introduce them and neatly tie them up in the course of a very slim feature film. No one gets enough attention, and when the film reaches a climax that pulls all three ladies together, the whole thing is nearly over already, cut short by time constraints that don’t fit the narrative world Robinson has just started to really spin into something that truly could have been great.

“Someone Great” will be available to stream on Netflix on Friday, April 19.

This Article is related to: Film and tagged Gina Rodriguez, Netflix, Reviews, Someone Great