The original "Terminator" star is back in front of the camera and press already can't get enough. 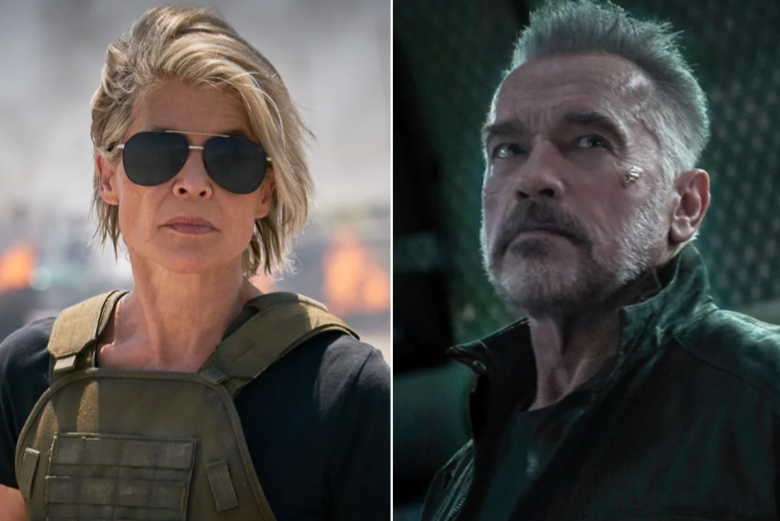 After striking out hard with critics and at the box office with “Terminator Genisys” in summer 2015, Paramount Pictures is resetting the beloved action franchise with the upcoming “Terminator: Dark Fate.” Original franchise director James Cameron is producing the movie and worked closely with filmmaker Tim Miller (“Deadpool”) to relaunch the franchise with “Dark Fate,” which will serve as a direct sequel to Cameron’s “The Terminator” and “Terminator 2: Judgment Day.” Paramount used its CinemaCon presentation to launch the first trailer for “Dark Fate,” and it left a lasting impression on the press.

Appearing onstage, Miller said there are still months left of VFX work needed to complete the movie and therefore the footage screening at CinemaCon was not final. Paramount showed off two clips from the movie and a reel. The first clips prominently featured Mackenzie Davis, who is seen time traveling and landing in Mexico City and fighting police in the first one. The second clip found Hamilton interrupting a fight between Davis’ character and two Terminators. Hamilton’s Sarah Connor is seen firing off a bazooka and saying, “I’ll be back.” The line prompted a huge reaction from the audience.

“Terminator: Dark Fate” stars Mackenzie Davis and Natalia Reyes, but the film’s biggest selling point is the reunion between original “Terminator” stars Arnold Schwarzenegger and Hamilton. The latter’s portrayal of Sarah Connor in “The Terminator” and “Terminator 2: Judgment Day” is iconic and now the character is returning for the first time with Hamilton in her shoes in decades.

TERMINATOR footage features a fully nude Mackenzie Davis time-travel landing in Mexico City and beating the shit out of a couple of cops. This is precisely as awesome as it sounds.

Just got a look at multiple sequences from #TerminatorDarkFate, including Sarah Connor stepping out of a jeep with a bazooka and blowing up two Terminators, before turning and saying, “I’ll be back.” Film looks bonkers badass. Arnold on stage with cast now#CinemaCon pic.twitter.com/qp8D4dbDL5

Um I got a little emotional watching the TERMINATOR DARK FATE footage. Thankfully director Tim Miller also was in tears showing it off. I think TERMINATOR could be back? Sorry, had to do it. #cinemacon

Linda Hamilton looks badass but…ok? Feels same old, same old. I may be the only person who thought Terminator Salvation was a good movie. #CinemaCon

“I’ll be back,” says Sarah Conner after blowing away the new Terminator who splits into two as his new power. Just saw a few minutes from Dark Fate and it’s pretty slick. It looks very different but extremely cool. #Cinemacon

Look, y’all, I was very doubtful about the need for another TERMINATOR, but that footage fucking owned. Direct sequel to T2, apparently ignores the others.

In the TERMINATOR: DARK FATE footage, a bunch of Terminators are attacking people, then Linda Hamilton shows up with a bazooka, blows them all up, then says, “I’ll be back.”

It’s great to see Linda Hamilton’s Sarah Connor back in action and she is, INDEED, back in action. We saw a short scene where she arrives to save the day in typical badass Sarah Connor fashion, wielding multiple weapons. #TerminatorDarkFate #CinemaCon