Executive produced by Seth Rogen and Evan Goldberg, "The Boys" examines how pop culture's love for the superpowered can exploit heroes and fans alike. 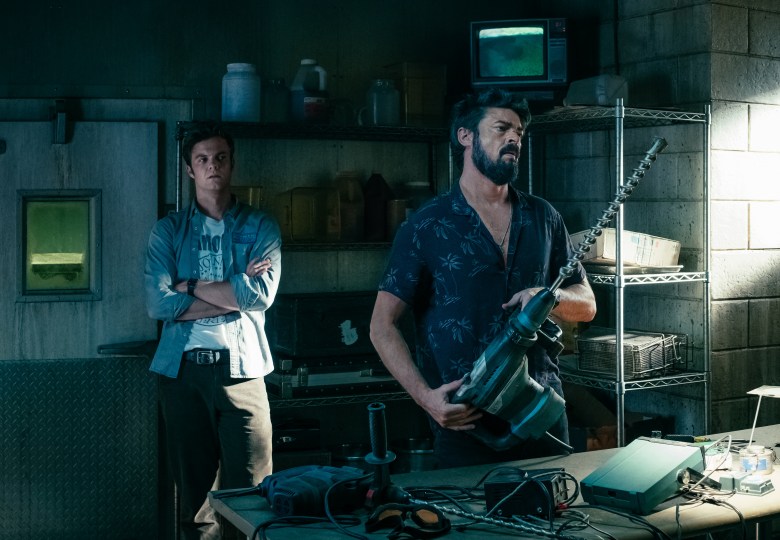 Picture it: a world obsessed with superheroes. OK, that’s not too hard. Instead, picture a world where people have superpowers, and a lot of them happen to be awful.

That’s the distinction made by “The Boys,” the upcoming Amazon Prime Video series which debuted Monday at the Tribeca Film Festival. The first episode, written by Eric Kripke and directed by Dan Trachtenberg, posits an alternate universe where superheroes protect cities, while their personas are monetized to the extreme by the Vought corporation. There are dozens of superheroes working for Vought, branded and packaged for public consumption, with their real-life sexual deviances and accidental murders treated like any other public relations issue.

Yes, “The Boys” sets itself the challenge of being edgier than your typical superhero fare, leaning on the original comics created by Garth Ennis and Darick Robertson to make sure the sex and violence are dialed up to 11. Or at least that’s the goal — when the intention is to shock and awe, it creates a level of expectation that’s sometimes hard to meet, especially when equally gritty and graphic franchises like “Deadpool” and “Kick-Ass” precede it.

That said, within the first few minutes of the pilot episode, “The Boys” delivers on blood, vomit, and swears, and there are more graphic visuals over the course of the first hour, as the series depicts its heroes’ various superpowers with a gritty realness. (For example, there’s no magic also-turning-invisible cloth to make an invisible suit for an invisible man.)

Central to the series is Jack Quaid as Hughie, an average guy whose first encounter with a superhero leads to massive tragedy; a tragedy which leads to his recruitment by Billy Butcher (Karl Urban) to join “the boys” — vigilantes who try to combat the ways in which the “real” superheroes abuse their powers. That premise is barely introduced in the first episode, though. Instead, the focus is on establishing this fictional universe, and the superheroes running amuck within (all of whom bear some resemblance to more famous characters from the DC or Marvel worlds, but with their own quirks).

Cast-wise, “The Boys” represents a mix of relative newcomers — if Quaid looks familiar to you, by the way, it’s because not only has he appeared in “The Hunger Games” and “Logan Lucky,” but he is the son of Meg Ryan and Dennis Quaid — and industry vets, including Elizabeth Shue, as the polished executive at the head of 3Vought, Urban having way too much fun as the rough and tumble agent (whose British accent is handwaved away), and “Gossip Girl” alumnus Chase Crawford manipulating his latent teen idol charm to skin-crawling effect.

“The Boys” might not feel essential to our culture’s ongoing superhero conversation, but it does cross a few lines other franchises might not. Perhaps the most disturbing moment of the pilot isn’t any of the graphic deaths, but a moment of sexual predation that communicates just how deeply power has corrupted some of these so-called heroes.

While superhero stories typically offer up an escape, “The Boys” is decidedly disinterested in such matters, and its corporate parody proves the most stinging. Disney may not have to deal with the level of perversion that the folks at the Vought Corporation do, but it is still a multinational corporation that made a billion dollars at the box office this weekend while former creators set up Go Fund Me pages for their medical bills.

The most exciting aspect of pop culture’s current obsession with superheroes is the fact that we now get so many opportunities to examine what, exactly, that says about us. People may love superheroes, and that love, we have seen, is easily exploited for profit. “The Boys” isn’t the first or only show to explore this aspect of the genre, but it’s very effective nonetheless.

“The Boys” made its world premiere at the Tribeca Film Festival on Monday, April 29. The first season premieres July 26, 2019, on Amazon Prime.

This Article is related to: Television and tagged Amazon, Karl Urban, The Boys, Tribeca