Plus, how she felt about monologuing to a bullet wound in the season premiere. 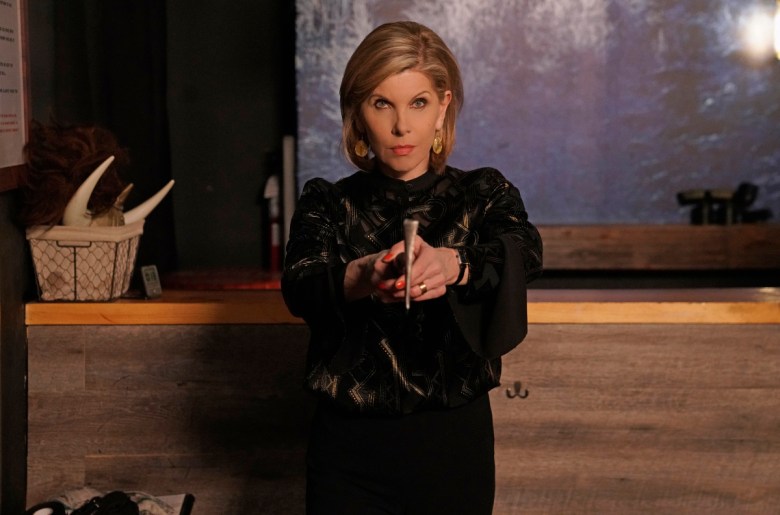 “We both agreed we couldn’t be too good at it,” Baranski admitted in an interview with IndieWire, “because [our characters] are not musical comedy performers. Whereas Audra and I are.”

Her singing isn’t the only thing getting roughed up on the third season of “The Good Fight.” Diane Lockhart, the strong, savvy lawyer that audiences fell in love with on “The Good Wife” has been on a difficult journey since the pilot of the current series, when Lockhart lost her job and her savings in a financial scandal and is forced to find new employment.

This season, the pressure has been cranked up to 11, with a sexual harassment scandal in the office, salary information getting leaked, and Lockhart joining an all-women Trump-resistance movement. Oh, she’s also taken up axe-throwing.

The one-time Emmy winner – and 15 time nominee – has an idea of what keeps her character from completely flying off the rails and what makes her journey so satisfying.

“The audience has gotten to know [Diane] over a long period of time,” Baranski said of the character she’s embodied for 10 years. “So they know all of the things that are very consistent about her as a human being, and as a professional and as a woman. So to watch this particular character going insane, losing her balance, is interesting.”

“For the audience to see the one who was always the sane person in the room, kind of losing it, that says something,” she added, “I think about where we are as a culture and as a country.”

And where we are as a country has everything to do with what’s going on in Washington, D.C. It’s impossible to talk about “The Good Fight” without discussing the Trump Administration and for good reason. Though many shows shy away from the partisan divide, attempting to lampoon both sides equally, the CBS All-Access gem pulls no punches about the president and Baranski, for one, is all for it. 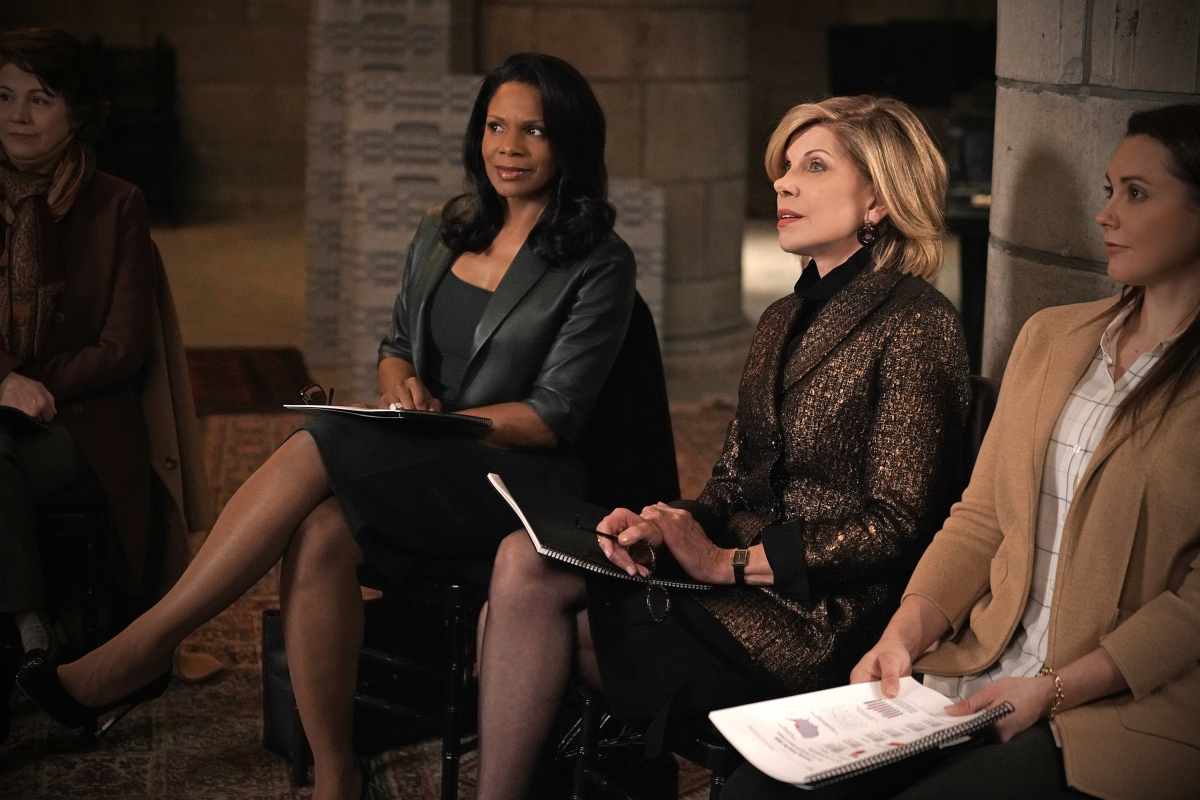 “The character’s politics, she’s very passionate, she’s very single-minded,” she shared. “I’m not going to hide the fact that I consider myself a liberal feminist as well. And I admire the character I’m playing.”

Moreover, Baranski see a world of difference between late-night spoofs of the president and something that engages earnestly with what it means to live in America in 2019.

“You can do comedy and send up Donald Trump every week,” she said, “but this is a complicated drama where you have professional people living through this age of fake truth and a president who’s behaving unlawfully, wondering, ‘Where does that leave us? Have we lost our moral centers?’”

Yet, the series refrains from falling into the trap of having liberals be infallible, opting instead to dig further into complicated issues of intersectionality and institutionalized racism. Maintaining this precarious balance is a credit, first and foremost, to the show’s writing, according to Baranski. Specifically, that of co-creators Robert and Michelle King.

“They’re craftspeople,” she said. “They know how to write an intelligent, complicated story. And it’s never good guys, bad guys. They look at all sides and they look at it through various lenses, often comedically and sometimes ruthlessly.”

To that end, the Kings’ have opted for some delightfully off-beat storytelling devices for this season of “The Good Fight,” ranging from animated segments to songs to monologues. Baranski had one such monologue in the season premiere, and it was delivered directly to a Trump-voiced bullet wound in Lockhart’s Republican husband’s back. 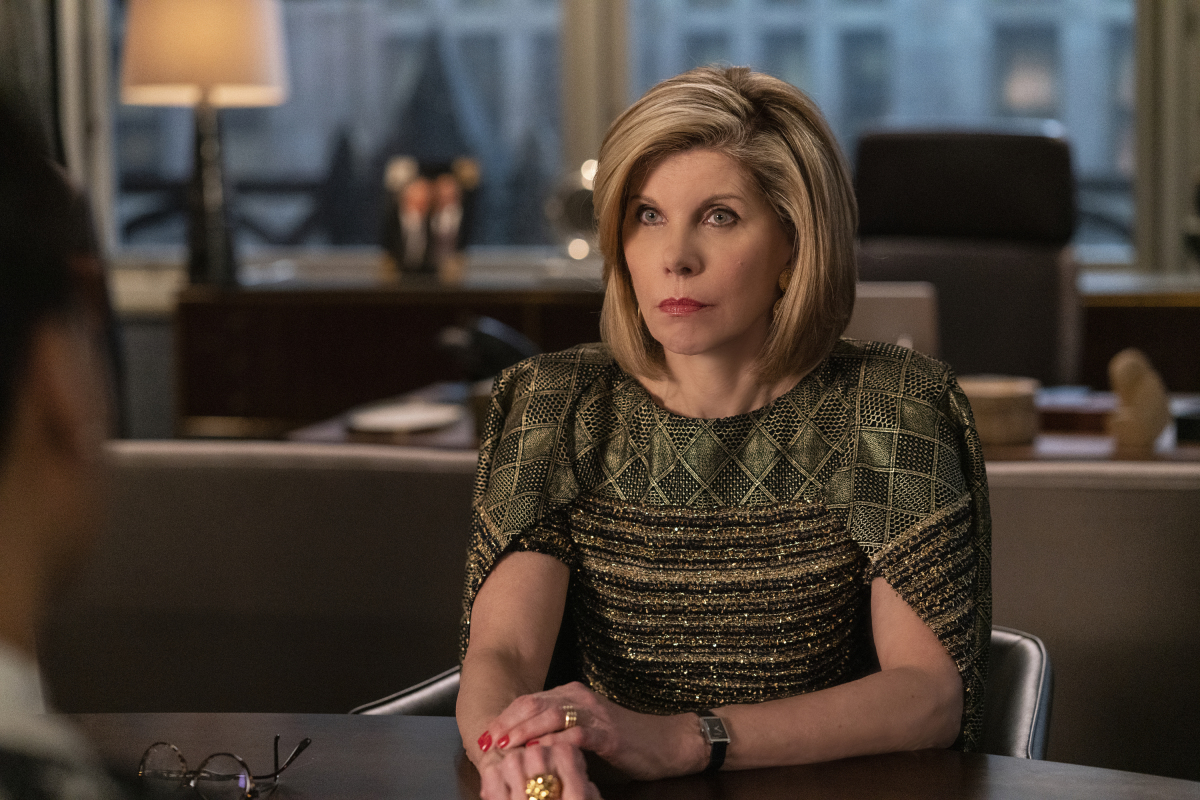 “I just thought, ‘Oh my God, talking to a wound. Okay, how’s that going to work?’” Baranski said. When she first heard about the scene, she even suggested to Robert King that her monologue might be better as voiceover.

And yet, the monologue persisted and Baranski quickly changed her tune, in part because of her affinity for words themselves. “I love language. And I love being able to craft a piece of writing,” she said. “It just belongs to me. It’s not interrupted by other people talking. It’s just my flow of thought.”

It’s both the language and the message that keeps Baranski coming back for more, whole-heartedly believing that when all is said and done, “The Good Fight” will be regarded as the most nuanced depiction of our current time.

“When we look back, we will think that this show really reflected more than any other show, what really was happening in this era,” she said. “And I don’t mean just Diane’s Trump fight. I mean how it addresses issues of race, and income inequality, the dangerous use of the Internet and troll farms and fake news and how all of this is affecting both the workplace and personal relationships.”

CBS renewed the series for a fourth season on April 23 and the actress is on board for an 11th year as Diane Lockhart. That is, assuming she makes it out of the third season in one piece.

“[Diane’s] very convinced that the only way to do this [enact change] is through extraordinary measures,” Baranski shared. “And we’ll see where that takes her by the end of the season. You’ll see it’s quite shocking.”

This Article is related to: Awards and tagged CBS All Access, Christine Baranski, The Good Fight