Hilary Duff is Sharon Tate in a slasher that feels like the worst possible version of Quentin Tarantino's "Once Upon a Time in Hollywood." 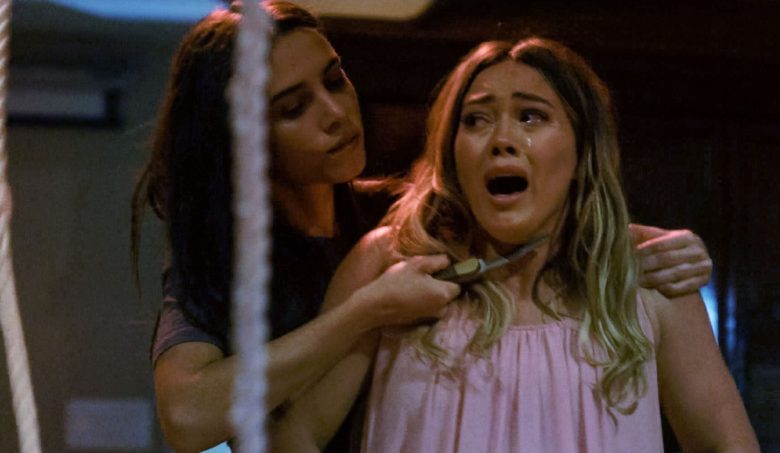 Daniel Farrands’ unfathomably bad “The Haunting of Sharon Tate” poses a number of provocative questions. The first is asked by Edgar Allen Poe in a stanza of on-screen text: “Is all that we see or seem but a dream within a dream?” Hmm. The next comes from the film’s casting director, whose name has been omitted from this review in order to protect the under-the-line talent: “What would it look like if the most culturally seismic killings of 1969 were amateurishly dramatized by Lizzie McGuire, Citizen Kane’s great-granddaughter, Lindsay Lohan’s love interest from ‘Mean Girls,’ and a smattering of attractive young actors who look more like ‘Vanderpump Rules’ characters than they do the members of a racist death cult?” And then — spoiler alert! — there’s the question that ties the whole room together: “What if the Manson Family murders were given the ‘Inglourious Basterds’ treatment and re-imagined as a direct-to-Crackle slasher movie that ended with Sharon Tate stepping into a parallel universe, killing the home invaders who broke into 10050 Cielo Drive, and then looking upon her own corpse from an alternate dimension?”

Respectively, the answers to those questions are “no,” “bad,” and “maybe a license should be required to write a screenplay.” But Farrands, a schlock hound who rose through the ranks of low-budget horror with films like “The Tooth Fairy” (not the one where The Rock plays hockey) and “The Girl Next Door” (not the one where Paul Dano saves prom night), has earned this chance at bat, even if he wastes it by swinging away at the foulest of balls. And to be fair, the questions raised in and by his latest screenplay are meant to be rhetorical; some of them might even be productive, or could have been had they been framed in a more sincere and disciplined fashion. As 18-year-old victim Steven Parent (Ryan Cargill) tells Sharon Tate at one point: “Things always seem crazy if you don’t ask questions.” On the other hand, sometimes they seem even crazier if you do.

“The Haunting of Sharon Tate” is basically the movie that Quentin Tarantino’s most pessimistic critics fear he’s making with this summer’s “Once Upon a Time in Hollywood.” It’s crude, it’s opportunistic, and it uses the victims of a notorious slaughter as props in a half-assed trip to the idea that cinema operates on a different stratum of reality than waking life — that it offers its legends a chance of cheating death. Farrands’ premise (and his self-administered permission to see it through) stems back to an interview from an apocryphal column in the long-defunct Fate Magazine that claimed Tate had a vivid premonition of her murder a year before the fateful August night when she was killed. That tabloid bullshit led Farrands to wonder if Tate could have somehow avoided her death, or if she was a slave to her own destiny.

But anyone hoping to find a thoughtful interrogation of fatalism is looking in the wrong place; so far as philosophical rigor is concerned, the gap between “The Haunting of Sharon Tate” and the “Final Destination” franchise is almost as wide as the one between “Bohemian Rhapsody” and “Amadeus.” Whatever Farrands’ original intentions, the film he’s made depicts the final days of Tate’s life with all the sensitivity of a snuff film.

The vast majority of the action is confined to that house on Cielo Drive, where the very pregnant actress (a wide-eyed Hilary Duff, who may have been pregnant herself) has been left to fret away the final days of her third trimester. She can’t reach her husband, an unseen Roman Polanski, and grows increasingly paranoid that his “location scouting” is a glorified euphemism for sleeping around. Her only companions are former lover and hairstylist to the stars Jay Sebring (Jonathan Bennett), coffee heir Abigail Folger (Lydia Hearst, yes, great-granddaughter of William Randolph), and Polish friend-in-law Wojciech Frykowski (Pawel Szajda) who seems to be allergic to wearing shirts. Tate isn’t altogether grateful for the company; she’s nervous about the people they know, unaware that the bearded weirdo who keeps dropping off record demos is trying to find the house’s former owner. 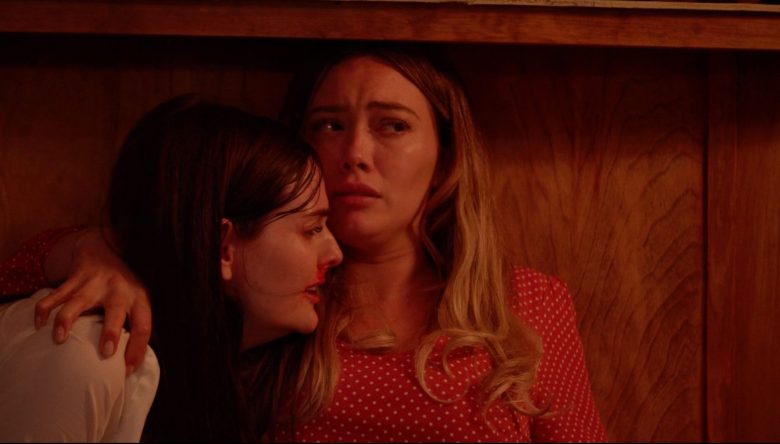 The story begins 72 hours before the murders, and creeps towards August 9 with thudding title cards that announce each new day. The dialogue in the sunbaked opening scenes is so painful that it’s hard to imagine how the actual killings will be any harder to watch. Not even Michael Haneke could shoot a home invasion sequence as torturous as the bit where Tate and her friends play a Ouija-like game in which Folger asks the board “Will Sharon have a beautiful baby girl?” When the board says “no,” Folger yelps “I knew you were having a boy!” It’s funny because Sharon isn’t going to have anything. Get it? It’s called “dramatic irony,” and maybe it should never have been invented.

And while virtually every scene is constructed out of such rotten wood, “The Haunting of Sharon Tate” never stops looking for new and exciting ways to be terrible. There’s Duff’s hoity accent, which gets so lost between Audrey Hepburn and Jackie Kennedy that it ends up sounding more like Tate’s untethered doppelgänger than it does anyone who ever actually lived. There are the constant jump-scare fake-outs, which credibly strive to convey Tate’s frazzled mental state, but are so overdone that it starts to feel like the actress is being attacked by the interior design of her house. And then there’s the bit where Tate and Folger take a morning stroll along the dusty paths of Griffith Park, only to find the corpse of the starlet’s missing dog being feasted upon by a swarm of hilariously fake computer-generated flies that look more like a mess of floating black dots. Because that’s what they are. 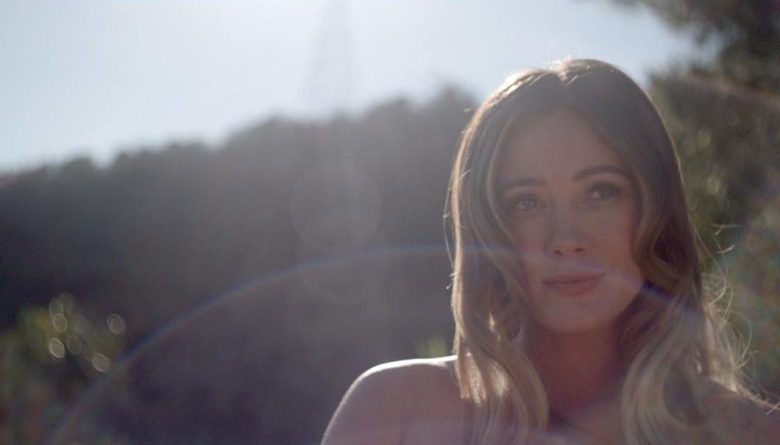 There are potentially clever elements of Farrands’ project; he may not have the chops to rip off “Repulsion,” but limiting the film to Tate’s perspective creates a window into the panic she may have endured throughout her final days. A more curious film may have seen Tate’s story as a pinhole through which to trace the death spiral of the ’60s, but Farrands looks at things from the inside out, so narrowly aligning with his victim that Tate doesn’t know Charlie Manson’s last name, and is shocked to hear the coded messages that have been layered into the music he leaves at the house (“Helter Skelter” gets its own jolt).

A generous reading would argue that “The Haunting of Sharon Tate” exists in the hazy space between historical infamy and first-hand experience, and that it messes with the space-time continuum in order to illustrate how many possibilities exist in that void. Even the chintzy digital cinematography could be explained as a less romanticized way of seeing these events. Alas, it would be more accurate to say that Farrands is just trying to have his cake and kill it, too — to stage the murders for their sadistic value, and then get to forgive that empty display of violence by altering the course of history.

The movie is only 45 minutes old when Tex Watson (Tyler Johnson) and the rest of his Instagram-hot hit squad descend on the Tate house, which suggests that viewers are in for a long and protracted slaughterfest. But the killings don’t last very long because it was all a dream! It’s still August 8, after all. And when death comes calling the next night, Tate is ready for it. It would have been fun if she’d been more confident in her premonition — if she’d boobytrapped the house and turned this entire movie into the world’s least tasteful “Home Alone” remake. Alas, Farrands is too committed to the idea of scavenging metaphysical brainfarts off the corpse of slasher genre tropes, and “The Haunting of Sharon Tate” resolves as a cheap revenge fantasy that suggests its subjects only died because they couldn’t see the writing on the wall.

“Is life just a random series of coincidences,” Tate asks, “or does it have some grander plan for us?” If the actress and her friends were fated to die so that Hilary Duff could star in a horrible movie about them 50 years later, it would seem to suggest that the universe is forged from the stuff of pure chaos. But the final word here belongs to Folger, who pleads for the Manson family to let her bleed out from her wounds rather than inflict more pain. “Please stop,” she begs, “I’m already dead.” If only Farrands had granted her that final request.

Saban Films will release “The Haunting of Sharon Tate” in theaters and on VOD on April 5.

This Article is related to: Film and tagged Hilary Duff, Once Upon a Time in Hollywood, Reviews, The Haunting of Sharon Tate