From an eye-opening Sundance documentary to a wild midnight thriller, the new section provides several recent festival gems another chance to find audiences. 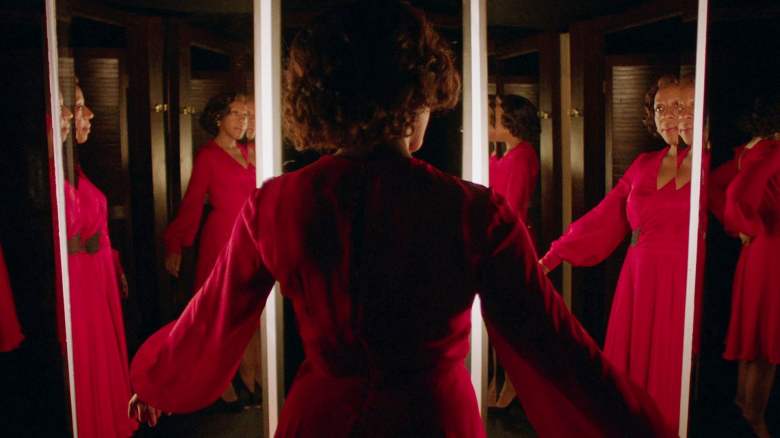 While the entire planet finds out if the Avengers can save the universe, the Tribeca Film Festival provides the latest example of some alternatives. Festivals serve many purposes for the industry but, as a whole, they’re a collective reminder that cinema extends far beyond the narrow confines of the multiplex. This puts them more in league with film critics than some may realize, as many of us relish the opportunity to advocate for underappreciated gems. (While I have you: Check out the 3D Chinese noir “Long Day’s Journey Into Night,” which has more daring technology and storytelling ambition than anything in “Endgame.”)

Yet despite these common agendas, the arts of criticism and programming often exist in separate categories in America. This year, I served on a selection committee for a new sidebar at the Tribeca Film Festival designed to address this rift: Tribeca Critics’ Week is a concise program of five features picked by New York-based critics, and marks the first program of its kind in North America. To my mind, it exists as an argument for the value of critics as curators beyond the confines of criticism itself.

Of course, critics have put on their programmer hats on many occasions, and freelancers in particular tend to oscillate between both roles. But the concept of the Critics’ Week has flourished in Europe for decades, beginning with a sidebar in Cannes that launched in 1961 from the French Syndicate of Cinema Critics. Since then, Cannes Critics’ Week has evolved into a key aspect of the festival’s DNA, where filmmakers at early stages of their careers — from Ken Loach to Wong Kar-wai — have often launched to great acclaim.

Since then, both the Venice and Berlinale have launched Critics’ Week sidebars, where a selection committee unaffiliated with the larger festival programming offers a handful of options for discerning viewers. The Tribeca Critics’ Week isn’t a repudiation of other programming selections throughout the festival lineup, as audiences who want to attend flashy red carpet premieres, celebrity conversations, and other marquee events certainly have much to explore. This kind of programming strategy has taken root in New York before, including the old model of the New York Film Festival’s revolving selection committee, where various critics would serve two- or three-year terms before others would take their place. (In recent years, the NYFF committee has gone in-house, though several staffers have roots in criticism.)

But Critics’ Week has a unique identity. Two years ago, I served on the Cannes jury, and it was one of the most gratifying festival experiences of my life. It provided me with the excuse to watch films exclusively because they had been programmed in the section, not because they starred famous people, touted an A-list filmmaker, or might sell for a lot of money. This type of section should offer that opportunity for all audiences.

The Tribeca Critics’ Week sidebar provided an opportunity for a few critics — myself, New York Magazine’s Bilge Ebiri, Vanity Fair’s K. Austin Collins, and Buzzfeed’s Alison Willmore — to simply talk through our favorites from recent festivals and not worry about other factors. While festivals often chase world premieres, this programming process required the opposite approach: We were culling from the circuit to surface some of the highlights. The resulting five-movie survey provides a window into quality offerings from TIFF, Sundance, and Berlin that could use the extra attention. 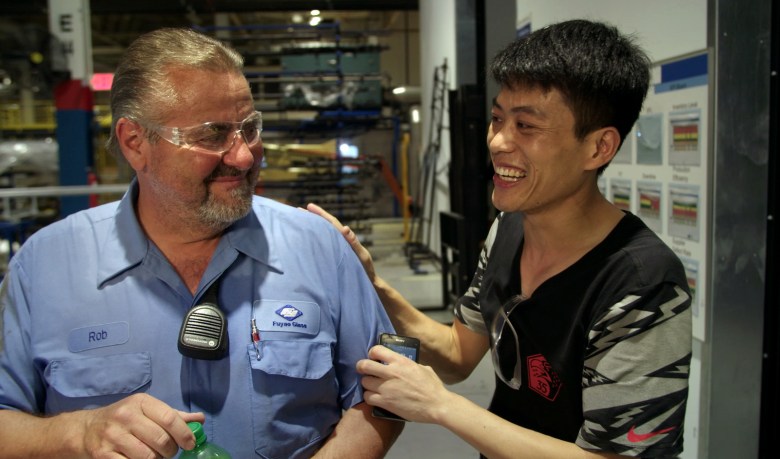 Still, some of the films in the selection are already on track to find audiences. Opening night entry “American Factory,” from Oscar-nominated documentarians Steve Bognar and Julia Reichert, scored distribution with Netflix out of its Sundance premiere, and closing selection “In Fabric” will come out this summer via A24. But these movies have no flashy CGI, celebrities, or superheroes. Their fates will be determined in large part by critical acclaim, and their selection at Tribeca has been designed as an extension of that.

In “American Factory,” Bognar and Reichert follow up their acclaimed short “The Last Truck: Closing of a GM Plant” with an eye-opening look at a Chinese billionaire who filled that gap in rural Ohio with a glass factory. Chairman Cao Dewang’s ambitious attempts to introduce his country’s trenchant work ethic to the American economy with Fuyao Glass America provides a remarkable window into modern workplace dysfunction. Assuming his intentions will illustrate the superiority of China’s business acumen, he provides the filmmakers with extraordinary access to board meetings, training sessions, and day-to-day life as the factory attempts to merge American and Chinese workers into a new model of efficiency.

Instead, the movie captures the fundamental incompatibility of those two markets, as U.S. workers fight to unionize while their Eastern peers view those efforts as pure laziness. A real-life tragicomedy about the evolution of working-class strife, “American Factory” is essential viewing for anyone intrigued by the looming shadow of China in the West. 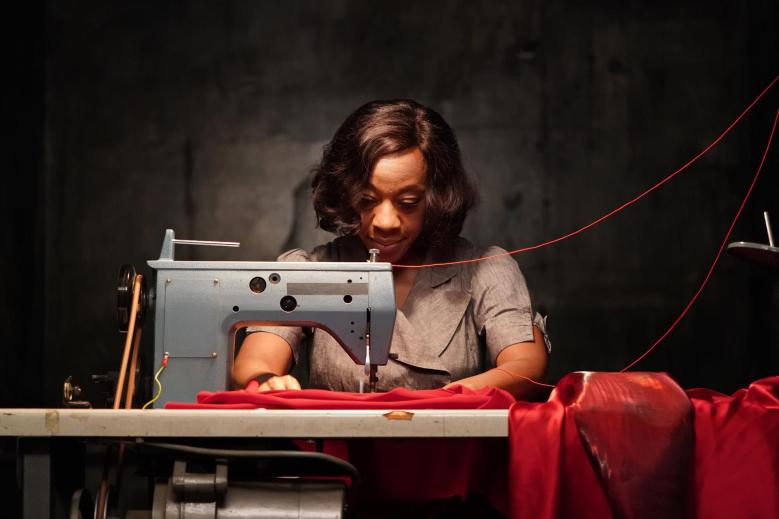 “In Fabric” provides a very different sort of window into capitalistic challenges, with the story of a haunted dress sold by a deranged saleswoman (Fatma Mohamed) that destroys numerous lives. The ensemble thriller is the latest disturbing head trip from British auteur Peter Strickland, whose “The Duke of Burgundy” and “Berbarian Sound Studio” were brilliant reimaginings of horror/thriller pastiche.

Here, he achieves an eerie fusion of the Italian giallo with Lynchian disorientation, as the dress makes its way from a middle-aged single mother (Marianne Jean-Baptiste, who delivers a powerful and disturbing performance) to a washing machine repairman (Leo Bill), among others. Each person who comes into contact with the dress experiences its surreal allure at first in near-euphoric terms, before events take a nightmarish turn. It’s the ultimate repudiation of consumerist society — a dizzying vision of the darkness lurking behind superficial obsessions.

On the lighter side, Stella Meghie’s “The Weekend” should receive all the attention it can get. Meghie has quietly become one of the more prolific Hollywood newcomers, having landed a series of studio deals after her breakout “Jean of the Joneses” at SXSW in 2016. Yet “The Weekend,” a scrappy and charming comedy about neurotic black twentysomethings set over the course of a single hectic weekend, has yet to secure a release. The movie premiered last fall in TIFF’s Special Presentations section, and also screened earlier this year at SXSW, yet it hasn’t received the discovery it deserves.

The L.A.-based story revolves around young comedian Zadie (Sasheer Zamata) who remains friendly with her ex (Tone Bell) as he makes progress with a new relationship. When the trio head to the countryside to visit Zadie’s mother, she meets a new romantic possibility in Aubrey (Y’lan Noel), who’s renting out a room in the same house.

Awkward romantic entanglements ensue, with all the wit and zippy attitude of early Woody Allen. For anyone keen on finding an Allen alternative for woke 21st century viewers, well, here you go: An all-black cast loaded with talent, smart dialogue, and combustible energy enmeshed in a shrewd love triangle that goes wrong in all sorts of amusing ways. But above all else, “The Weekend” is a wondrous showcase for hilarious former “Saturday Night Live” star Zamata, who ought to become a household name. 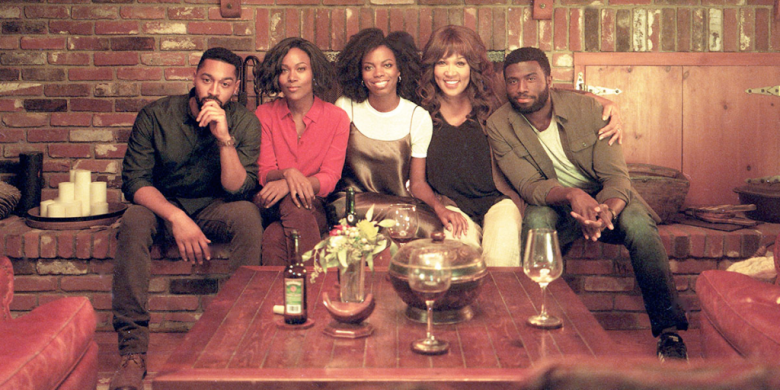 The other two films in the section are more serious looks at relationship challenges. Andrew Ahn’s tender “Driveways” takes the mold of a familiar dramedy and deepens it. After her sister dies, Kathy (Hong Chau) and her eight-year-old son Cody (Lucas Jaye) head to the late woman’s small suburban neighborhood to clean out her home. Once there, Cody bonds with the cranky next-door neighbor (Brian Dennehy), who gradually reveals his sensitive side.

It’s the sort of premise that has fueled countless formulaic lo-fo American indies, but Ahn’s shrewd control of the material adds a surprising degree of texture and insight into this unlikely trio’s experiences. Newcomer Jaye shows plenty of potential, but Chau gives what may be her best performance to date, and Dennehy delivers an emotionally sophisticated performance that keeps evolving as the movie moves along. Its understated finale is a masterstroke of concision that manages to avoid the easy sentimentalism that so often ruins this material.

A similar quality elevates “This is Not Berlin,” the punk rock memoir of Mexican director Hari Sama. A confident and wily look back on Mexico City in the mid-80s, when the filmmaker himself was coming up, the sprawling drama revolves around a pair of rebel teens from a middle-class background who gain access to an underground nightclub, where they’re exposed to experimental art, sexual freedoms, and plenty of intoxicants to hold the whole package together.

A kind of spiritual sequel to the ‘70s vision of the same city in “Roma,” Sama’s ambitious ensemble piece takes its time crafting a fully realized world. On some level, it’s a coming-of-age tale done many times before, but they rarely cut this deep, with cultural insight to spare — from the specter of AIDS to the threat of drug addiction, “This is Not Berlin” unearths a minefield of challenges as a generation of Mexicans push for a more liberated existence.

In an ideal world, these movies would become the most talked-about selections at any festival that screens them, but that’s not a world we live in. Nevertheless, they belong on every committed viewer’s must-see list for at least two reasons: Collectively, they provide glimpses of different cultural experiences and values as only cinema can convey them; individually, they offer unique snapshots of major filmmaking talent. Plenty of critics have endorsed them. Now it’s the audience’s turn to discover them.

This Article is related to: Film and tagged American Factory, in fabric, Tribeca