Tiffany Haddish and Ali Wong star in Lisa Hanawalt's new series where the two title characters do things only drawings can do. 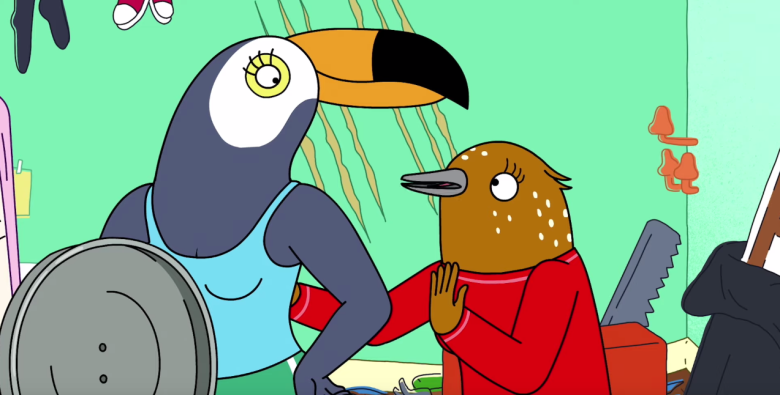 Judging by the trailer for the new Netflix series “Tuca & Bertie,” there have never been friends quite like the two title characters. Sure, a lot of that comes from the fact that they’re anthropomorphized birds. But the show that puts them front and center looks like it’s going to do things with an animation style that’s completely its own.

Tuca (Tiffany Haddish) and Bertie (Ali Wong) are inseparable best friends, both figuratively and very nearly literally. After Bertie moves in with her boyfriend Speckle (Steven Yeun), the two do their best to stay incredibly close. As both Tuca and Bertie scramble to stay afloat with new job opportunities in a big city, they find ways to tackle those wide-ranging adventures together.

This human-like animal animation style may look familiar to watchers of “BoJack Horseman,” which “Tuca & Bertie” creator and executive producer Lisa Hanawalt previously worked on. But this new show looks like a separate creation all its own. Beyond the strong friendship at the center, it seems unafraid to get goofy every once in a while, and use every imaginable color in the process. (Oh, and viewers are apparently in for a handful of fight scenes as well.)

In the series first-look Hanawalt explained, “These are real characters, this is a friendship between 30-year-old birdwomen. I want women in the real world to relate to it, even if they’re not birdpeople.”

Watch the full trailer (with plenty of snake trains, on-screen texts, and big ol’ jaguars) below:

“Tuca & Bertie” premieres May 3 on Netflix.