Only Patrick the aardvark chocolatier could rival Mr. Ratburn's love of homework. 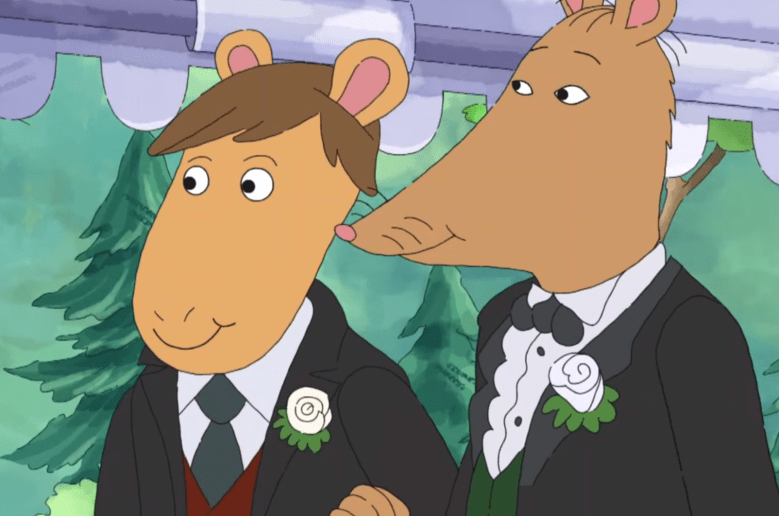 Mr. Ratburn — lover of homework, rat teacher to the stars — has finally found his forever love. In a quietly groundbreaking episode of the long-running PBS Kids show “Arthur,” the kids’ beloved teacher gets married — to a cute chocolatier named Patrick, no less. The 22nd season of “Arthur” kicked off with a very special episode titled “Mr. Ratburn & The Special Someone,” which ended in Mr. Ratburn’s marriage and coming out as a gay man. The episode aired May 13 and featured a guest voice appearance by none other than Jane Lynch, who played Mr. Ratburn’s pansuit-rocking, micro-managing, total power top of a sister. It was written by longtime “Arthur” head writer Peter K. Hirsch.

The episode follows the gang of Arthur, Muffy, Francine, and Buster, as they try to figure out who Mr. Ratburn is marrying. They first sense something is up when their beloved teacher takes a phone call during class, and they overhear him talking about flower arrangements. Shocked that their teacher has a life outside of school, Muffy proclaims “Teachers don’t get married. It’s just wrong.” After surreptitiously following him, they find him dining with a fast-talking bossy rat with a sweeping blonde coiffure named Patty (Lynch).

Determined to break up what they deem to be an improper match, the kids eventually fail in their efforts to find Mr. Ratburn another suitor. Once at the wedding, they realize Patty is Mr. Ratburn’s sister. When they turn their heads to see who the lucky lady is, it turns out to be Patrick, a kindly aardvark chocolatier with great hair from earlier in the episode. Patrick turns and gives a wink to the students, and the camera, and Arthur smiles pleasantly at Muffy.

Not much fanfare is made of Mr. Ratburn’s preference, other than the confusion with Patty. It’s a quiet moment, but a groundbreaking one for the kids series. PBS fumbled the ball on LGBTQ representation back in 2005, when it pulled from the air another “Arthur”-related episode simply for featuring lesbian moms merely as background characters. “Postcards From Buster” was a spinoff of “Arthur” in which Buster the rabbit toured different families around the world. An episode set in Vermont featured lesbian moms.

You can watch Mr. Ratburn’s happy ending in “Mr. Ratburn & The Special Someone” on PBS Kids.

This Article is related to: Television and tagged Arthur, Jane Lynch, PBS