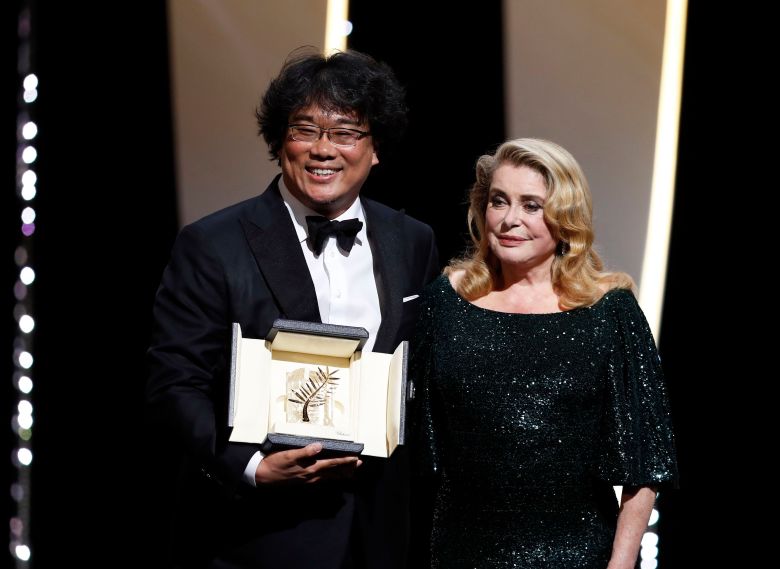 Bong Joon-ho has made groundbreaking history at the Cannes Film Festival by becoming the first Korean director in the festival’s 72-year history to win the Palme d’Or. The writer-director won the Palme for his dramatic thriller “Parasite,” which earned rave reviews in competition and was named by IndieWire as one of the 10 best films of the festival.

Bong Joon-ho competed for his first Palme d’Or at Cannes 2017 with his Netflix-backed “Okja,” starring Jake Gyllenhaal and Tilda Swinton. The film lost the Palme d’Or prize that year to Ruben Östlund’s “The Square.” Bong has a long history with the Cannes Film Festival, having premiered his breakout monster movie “The Host” at Directors’ Fortnight and his acclaimed “Mother” in the Un Certain Regard sidebar.

“Parasite” centers around a struggling family that invades the lives of the wealthy Park family and gets in over their heads when they become entangled in an unexpected incident. The cast includes Song Kang-ho, Lee Sun-kyun, Cho Yeo-jeong, Choi Woo-shik, and Park So-dam.

In naming “Parasite” one of the best films of the 2019 Cannes Film Festival, IndieWire’s senior film critic David Ehrlich called the drama one of Bong Joon-ho’s best directorial efforts to date.

“‘Parasite’ starts as an off-kilter class comedy of sorts before sinking into something wild, unclassifiable, and burning with impotent rage,” Ehrlich raved. “As heightened as ‘Okja,’ but as realistic as ‘Mother,’ Bong’s latest is a madcap excoriation of life under the pall of late capitalism, and it leaves us all a little richer at the end of it.”

Neon has picked up U.S. rights to “Parasite.” The distributor has already announced plans to launch the movie in the fall with a full awards campaign.

Other 2019 Cannes winners included the Dardennes brothers for Best Director (“Young Ahmed”), Celine Sciamma for Best Screenplay (“Portrait of a Lady on Fire”), and Grand Prix winner “Atlantics” from director Mati Diop. The acting prizes went to Antonio Banderas for “Pain and Glory” and Emily Beecham for “Little Joe.” Click here for the full winners list.

This Article is related to: Film and tagged Bong Joon-Ho, Cannes, Parasite