Annie Silverstein's debut may be naturalism-by-the-numbers, but its two authentic performances give the movie an emotional center. 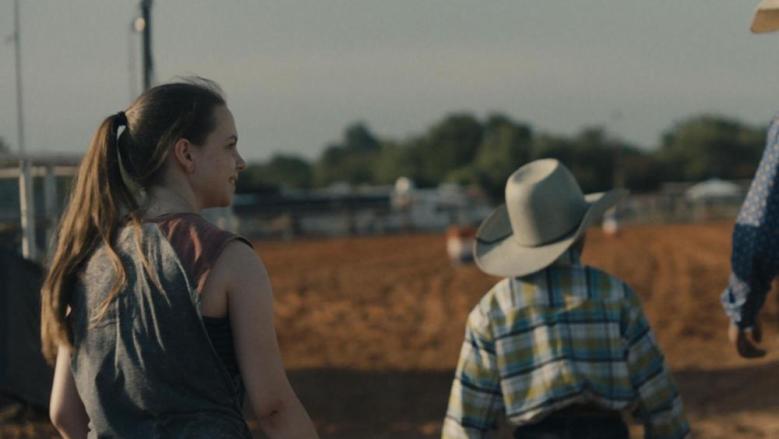 “Bull” is a few old cinematic chestnuts at once: a rascally youth shaken from empty rebellion by a world-weary new mentor, rodeos as a conduit for personal liberation, and casting non-actors in documentary-like settings. Director Annie Silverstein doesn’t elevate these conventions to new heights, but understands their potential well enough to craft an absorbing window into marginalized lives. This evocative coming-of-age story, where black rodeos in rural Texas help an impoverished 14-year-old girl find her potential, stuffs conventional ingredients into a wondrous vision of life on the edge.

The plight of teen rebel Kris (first-timer Amber Harvard, a genuine discovery) initially unfolds like a rural “Kids”: With her mother in a state penitentiary, Kris wastes her days with her grandmother and caring for her younger sister on the outskirts of Houston, roaming the forestry and drab neighborhoods in fits of anger and malaise. Harvard, who was found in an open casting call, is a striking new face in American cinema — her eyes dart about with fiery determination and fear, but when she finally gets a chance to smile, it comes as a revelation. Her scenario may seem familiar, but she elevates it from her very first scene.

One night, Kris breaks into the house of her next-door neighbor, Abe (Rob Morgan, “Mudbound”) and invites some neighborhood kids over to raid his liquor cabinet and run wild with his chickens. Abe, a lifelong bull rider who works late nights in the ring, returns home the next morning to find his house in ruins; after the cops come by, Kris’ grandmother pleads for leniency, and the stone-faced Abe relents: Kris gets to work off her debt to him with handiwork, though she would much rather follow her family history. When an officer tells her she’s getting a second chance, she sighs, “Can’t you just take me to juvie?”

Instead, she receives a more productive sentence: Under Abe’s hesitant wing, Kris discovers the liberating potential of bullfighting as she watches the African American riders careen across dusty arenas for boisterous crowds. It’s harrowing, , but cathartic for just the same reasons, and she eventually wants a piece of the action. With time, Abe — a hard-drinking, pill-popping recluse whose broken body suggests he isn’t long for this world — embraces a paternal role she lacks. This trajectory seems inevitable from the moment these characters share a frame, but they’re so convincing that the arc is poignant nonetheless.

Abe’s path toward self-destruction puts him in a similar league to Mickey Rourke in “The Wrestler”: Both men turn their bodies into the only consumer good at their disposal. Abe may need a new line of work, but the rodeo is the only currency he seems to understand, and he just can’t let it go.

“Bull” belongs to an unexpected new sub-genere designed to complicate traditional understandings of cowboy culture in America, from Gabriel Mascaro’s dazzling portrait of Brazilian riders in “Neon Bull” to the prison rehabilitation story “The Mustang” and Andrew Haigh’s teen runaway tale “Lean on Pete.” But all of these entries hover in the shadow of Chloe Zhao’s “The Rider,” the majestic portrait of an indigenous man whose injuries in the ring take him out of the game, and in effect, into an existential crisis. For these riders, the peril of the job is the only world they know.

Compared to Zhao’s ethereal achievement, “Bull” is more of an understated footnote that applies the same tropes to the framework of a less sophisticated narrative. It’s an engrossing entry all the same, largely for the way it fixates on the way one generation mandates the behavior of the next. Middle-aged Abe has been damaged by bulls so many times he may as well sign his own death certificate, but he refuses to consider other options. Meanwhile, Kim grapples with the dueling options at her disposal: While she gravitates toward the action of the ring, she’s constantly pulled back to the cycle of boredom and addiction in her own community, including her mom’s dope-dealing pal and his lecherous son.

As these conflicting worlds come to a head, “Bull” mines poetry from the Greek chorus of evocative bull-riding antics, some of which end in jarring, violent developments. Too often, however, the drama tends to fall into American gothic tropes, as if intent on draining the joy from these characters’ lives. Silverstein’s naturalism-by-the-numbers approach would feel awfully reductive if it weren’t carried by a pair of astounding performances that hover on a plane of their own, generating unique chemistry that finds its emotional center with time.

Even when the movie overplays its central metaphor (bull-riding connotations crop up in both a sex scene and an argument), the pathos of its two contrasting figures maintain an underlying authenticity. Abe and Kris are fascinating enigmas who suppress their frustrations until they’re forced to lash out. The touching finale finds them at last uncovering some measure of solace in companionship, even as the future remains uncertain. They may risk their lives in the ring, but under the circumstances, it’s still their greatest hope.

“Bull” premiered at the 2019 Cannes Film Festival in Un Certain Regard. It is currently seeking distribution.

This Article is related to: Film and tagged Annie Silverstein, Bull, Cannes, Reviews