Pine joined his director, writer, and fellow cast members to honor Fauna Hodel at TNT's lavish night out with "I Am the Night." 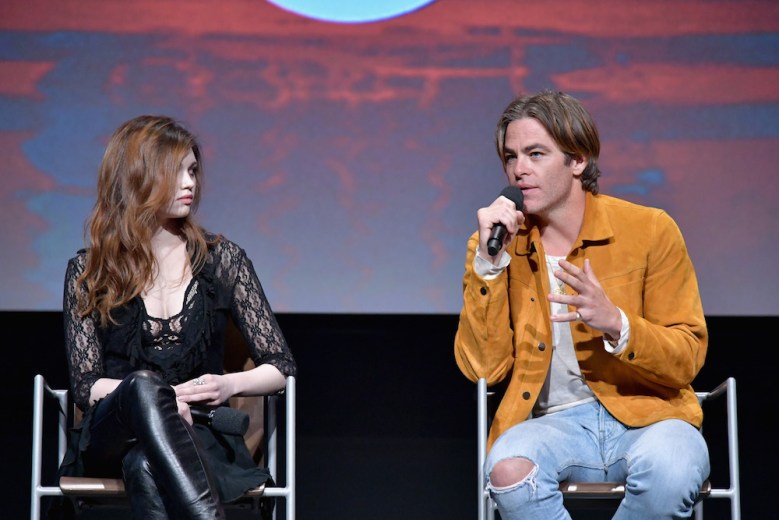 Chris Pine’s character didn’t have a drug problem in “I Am the Night,” but he did do a lot of drugs.

“The joke was Jay’s got a lot of problems, but drugs aren’t really a problem,” writer and executive producer Sam Sheridan said, speaking at TNT’s FYC event for the program. “They’re like a symptom, [but] we didn’t want to make it [about that].”

Still, as Jay Singletary, Pine felt like a bit of a loser, especially when the limited series’ fictional protagonist met up with its real-life hero, Fauna Hodel (played by India Eisley).

“I felt creepy, you know?” Pine said. “It was that weird dynamic where you have the leading man and the leading lady, and you think something romantic may happen, but it can’t happen. So you have to toe this line, and we play it in one episode that was odd […] in Hawaii.”

“It felt tragic and just dirty while I was around,” he said. “This beautiful, doe-eyed woman is looking at me, and I was just a fucking drug addict.”

The crowd of 500-plus TV Academy members laughed as Pine talked about his character’s sad sack roots, but they sat up when he paid tribute to his co-star.

“But India has such a difficult role because she’s our cypher into this world,” he said. “With these big eyes, she’s kind of our witness to the extremity that’s happening — from me, to Jefferson [Mays], we’re all wild and crazy, and she’s gotta be this anchor.”

Based on Fauna Hodel’s memoir, TNT’s limited series tracks the granddaughter of George Hodel (played by Mays) as she discovers her true identity and travels to Los Angeles to meet her family. There, she starts to see behind the curtain and discover why George was a suspect in the Black Dahlia murders, with a little help from a down-on-his-luck reporter Jay Singletary.

Pine’s character is an amalgam of real individuals, but largely fictionalized to better tell their story. Many of Jay’s inspirations came from Pine and Sheridan’s joint research, including Karl Marlantes’ 2011 nonfiction book, “What It Is Like to Go To War.” Pine was reading it on the set of “Wonder Woman” when he learned of “I Am the Night,” and the history of veterans stuck with him.

“This current 20th century generation of men, especially Vietnam and after, were thrown into the mix, asked to kill, and thrown right back into the civilized world,” Pine said. “One thing [Marlantes] talked about that really stuck with me was the euphoria of killing — the inability to reconcile that animalistic feeling with what he was expected to be like at home […] really mirrored Jay’s relationship with the antagonist. He saw himself in this monster and thought of himself as a monster.”

Jenkins first got interested in Fauna Hodel’s story after having lunch with the real woman years ago.

“My initial conversation with Fauna Hodel informed what it brought to my life and what I hoped to bring to other people,” she said. “I walked away from my lunch with her overwhelmed by the darkness of the story, thinking I don’t know if I can take this on — yet the light overshadowed the dark because of Fauna Hodel. I’ll always remember one of the last things she said to me at that lunch, which was after I asked, ‘Do you think these horrible things [George Hodel was accused of doing] were true?’ And she said, ‘Probably.’ That was so Fauna because none of that was going to define or encapsulate her — she’s so happy.”

Jenkins directed two episodes of “I Am the Night,” including the pilot, which screened during the event. Following the episode, she took the stage along Pine, India Eisley, Connie Nielsen, Jefferson Mays, Golden Brooks, and Sheridan, her husband. They all signed copies of the pilot script and handed them out to TV Academy members in attendance. The party, shown in the gallery above, featured props and stages from set, performers evoking the L.A. atmosphere of the era, and a band singing numbers from back in the day.

Before the screening, Pine, Jenkins, and Sheridan took to the stage to pay tribute to the real Fauna Hodel, and between the panel and the party, Golden Brooks delivered a live performance inspired by the life of Fauna Hodel. When “I Am the Night” premiered in Los Angeles earlier this year, TNT took an immersive approach to the afterparty by creating a true 1960’s “Art Happening” at the Chateau Marmont. They commissioned Little Cinema, a cross-disciplinary, theatrical production company from New York to create an immersive world inspired by themes in the series, and one room held a secret audiovisual performance featuring Golden Brooks.

At the FYC Event, Brooks performed live in front of the video, singing and moving in conjunction with her character in the short film. Watch the video below. “I Am the Night” is eligible in all limited series categories at the 2019 Primetime and Creative Arts Emmy Awards.

Little Cinema Feat Golden Brooks – Live for I Am The Night Emmys FYC from CHNNLS on Vimeo.

This Article is related to: Awards and tagged Chris Pine, I Am the Night, Patty Jenkins, TNT