The former gubernatorial candidate also explained why she has yet to throw her support behind any of the current presidential candidates. 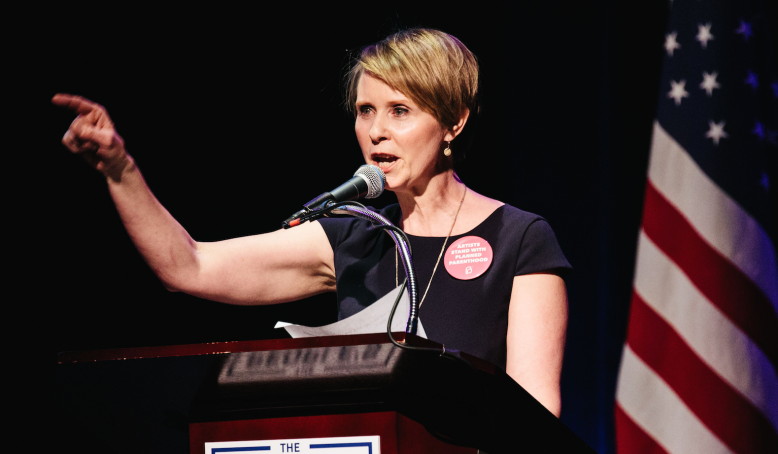 During an interview promoting her new film “Stray Dolls,” Cynthia Nixon shared her thoughts on the 2020 Democratic race, and while the former gubernatorial candidate was hesitant to endorse any candidates, she did take issue with one of them.

“I don’t feel compelled to make any kind of decision. I think there’s a lot of exciting ideas being tossed around,” Nixon said. “There’s a lot I like about Joe Biden, but there’s a lot that concerns me and I think his inability to actually apologize to Anita Hill is a real big deal.”

In a recent appearance on The View, Biden addressed his apology to Hill, expressing regret for the way Hill was treated during Justice Clarence Thomas’ confirmation hearings. “I am sorry she was treated the way she was treated. I wish we could have figured out a better way to get this thing done,” said Biden. Many critics, including Nixon, thought his language was far too passive.

“His inability to see or at least admit that it wasn’t just something that happened to her, that he was the one with the power, and he made those decisions, and that’s why we still got Clarence Thomas on the court and it’s why all those women weren’t heard from,” Nixon said. “That could’ve corroborated, could’ve echoed her experience.”

As for the other candidates? “I like Elizabeth Warren, I think she’s amazing,” Nixon said. “I was a Hillary person last time, but I think Bernie is very compelling. I don’t feel any need to pick a horse yet. Still watching.”

Nixon isn’t swayed by arguments that Democrats should rally behind any candidate simply on the basis of whether they stand the best chance at beating Donald Trump.

“That’s like saying whoever can get me pregnant,” she said. “Wouldn’t you like the person who could get you pregnant also to be the person you’d like to spend the next however many years with and raise the child with? Do you know what I mean? We could aim a little higher. Yes, absolutely, we’ve got to get him out, but then we’ve got to do something with the next four years, and eight years. We’ve got a lot of work to do.”

Before making her political aspirations public, Nixon campaigned for New York City Mayor Bill DeBlasio. She would not comment on his performance. (This interview took place before reports that DeBlasio planned to announce his presidential campaign next week.)

She is not happy with a controversial new rule adopted by the Democratic Congressional Campaign Committee prohibiting the organization from conducting business with “political vendors” that support primary challengers to incumbents. Many in the party are calling the new rule a “blacklist.”

“Any old blue just won’t do, we don’t want just a Democrat. We don’t want an old white Democrat who’s anti-LGBT, and anti-choice, and anti-universal health care, when we could have a woman, a person of color, a queer person who actually believes in those things,” Nixon said. “We should be challenging those incumbents, get some new blood, particularly if they don’t really hold our progressive values. I think it’s important to primary people, and I think that the DCCC should at least stay out of things, and not penalize people for trying to make our party not just more progressive but more inclusive.”

This Article is related to: Film and tagged Cynthia Nixon, Stray Dolls