This amateurish superhero origin story only underscores the urgent need for major Hollywood studios to do right by Latinx audiences. 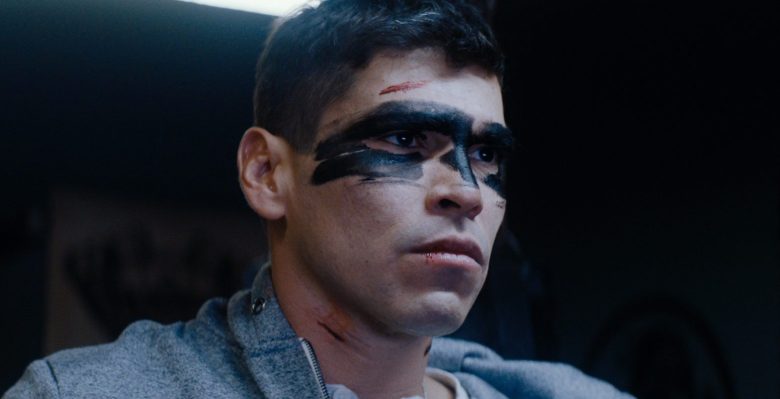 A gritty Los Angeles crime drama that (very) slowly becomes a kind of “Batman in the barrio,” Ben Hernandez Bray’s “El Chicano” seldom amounts to anything more than a crude prototype for the kind of Latinx-driven superhero movies that Marvel and DC should already be making by now. Maybe, if Hollywood didn’t so consistently underrepresent the country’s most significant audience of non-white moviegoers, Bray would have been able to scrounge up more than $7 million for his chintzy-looking debut. Maybe, if backwards industry logic didn’t require people of color to substantiate their own existence, this cheesy (but ultra-violent) vigilante saga might’ve been more than a proof-of-concept for an idea that never should have needed one in the first place (Bray and producer Joe Carnahan were forced to finance the film with Canadian oil money after local investors large and small balked at the idea of an all-Latinx cast).

As it stands, “El Chicano” feels less like a cut-rate version of a comic book movie than it does an insanely over-budgeted pitch video. And while it leans much harder into Mexican-American identity than a major studio might ever allow, it also demonizes Mexican nationals to an extent that only Donald Trump could possibly appreciate. As a superhero origin story, “El Chicano” veers between dull and amateurish. As a push for better Latinx representation, its value is almost as muddied as its cinematography.

Burying an evocative backstory underneath a mountain of dick-swinging police drama, “El Chicano” is tethered to officer Diego Hernandez (“We the Animals” star Raúl Castillo), a stone-jawed Los Angeles cop who clawed his way out of the same neighborhood that claimed his twin brother. It’s a classic story of two siblings who found themselves on opposite sides of the law; one fought the good fight and the other broke bad.

Or so Diego thinks. When he and the jaded Captain Gomez (comedian George López, dignified in a surprisingly tender dramatic performance) happen upon a gruesome crime scene, Diego begins to unravel the mystery around his brother’s death. A mystery that involves a childhood friend named Shotgun (David Castañeda), a psychotic Mexican cartel leader, and an urban legend about a crime-fighting warrior who rides through the barrio on a motorcycle when the sky turns black. The “Ghetto Grim Reaper.” El Chicano.

Castillo, a clear-eyed and charismatic talent who could easily lead a franchise as well as he backstopped an intimate HBO series, is rendered almost unrecognizable by all the direct-to-video dialogue that weighs down Bray and Carnahan’s script. There isn’t an actor alive who could look at a warehouse full of fresh corpses and sell a line as dopey as “I have a feeling it’s linked to something bigger… it has to be!” The writing in “El Chicano” is so clunky that it almost starts to feel like a breath of fresh air when Carnahan mixes things up by going macho. You can practically see the “Blood, Guts, Bullets and Octane” filmmaker turning himself on with hard-boiled lines like “Those murders got a lot of dicks hard, and they’re looking for someone to fuck.” Even Michael Mann is rolling his eyes.

Things are a bit smoother when the film isn’t trying so hard to channel Frank Miller. Diego’s investigation leads him back into the barrio that he fought to escape, and tees him up for an occasionally gripping confrontation with his past. One powerful scene between Diego and his anguished mother suggests that our hero’s success has come with some broad assumptions about his brother’s supposed failure (Castillo’s performance deepens whenever he sniffs out a shared emotional history between the film’s stock characters). And while the movie stops dead in its tracks in order to accommodate a lecture about how California is conquered Mexican land, it provides a fascinating pretext for Diego to invariably assume the role of El Chicano — to break the law of the land in order to bring peace to the people who came with it. The masked vigilante is light on mythos (his superhero aesthetic is just a lot of black leather), but his Aztec war knife at least keeps him rooted in a certain tradition.

If “El Chicano” contends that California is stolen territory, it dilutes that argument by treating the film’s villainous cartel as an invading force that’s coming to reclaim the barrio; here, virtually anyone with a Mexican passport is a homicidal sociopath. A better film might have reckoned with the Mexican-American community’s attempts to stop drug-related violence from crossing the border, but El Chicano basically functions like a one-man wall. “This is not Mexico,” someone insists,” and it never will be.” It’s a loaded message the movie delivers with the moral clarity of Tony Stark declaring “I am Iron Man.”

All the same, a more coherent political ideology might have clashed with a movie in which everything else is just as messy. Bray is an accomplished former stuntman who knows a thing or two about how to destroy a body on screen, but $7 million only buys you so much carnage, and “El Chicano” becomes an unintelligible mess when this gritty inner-city drama finally makes the leap into superhero territory. Like Batman, El Chicano is a creature of the night, lurking in the same darkness that allows Bray to obscure the limitations of his budget. Even after Diego accepts his destiny and takes the urban legend out of the shadows, it’s hard to make sense of his justice. Latinx audiences deserve better. If nothing else, “El Chicano” makes that perfectly clear.

This Article is related to: Film and tagged El Chicano, Reviews