Stefen Fangmeier reveals how the VFX team was able to create the element of surprise and the limits of dragon fire. 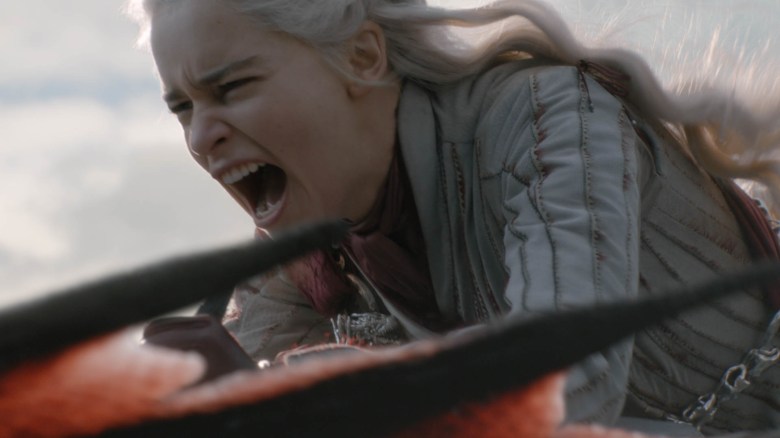 [Editor’s Note: The following article contains spoilers for “Game of Thrones” Season 8, Episode 4, “The Last of the Starks.”]

On “Game of Thrones,” dragons are supposed to win the war for Daenerys Targaryen (Emilia Clarke), and yet, she’s just lost her second one. In the episode “The Last of the Starks,” Daenerys is flying on Drogon to her home on Dragonstone when Rhaegal is shot by Euron Greyjoy (Pilou Asbaek) using a giant mounted weapon called a Scorpion. The bolts are so large and powerful that the third to pierce Rhaegal’s neck spells his doom, and he plunges into the water below.

How in hell can fierce, airborne creatures that breathe fire be so vulnerable? IndieWire spoke to VFX supervisor Stefen Fangmeier to understand the logistics behind that fatal shot.

“Obviously, it was meant to be a surprise. I did have my misgivings about necessarily how it could be an element of surprise if she’s up there on her dragon, and then out of nowhere comes this fleet of ships,” he said. “So how I actually tried to help that is I created this land mass that has a gap that was as narrow as possible to kind of have [the fleet] be revealed behind that. Of course, we never did an overhead shot to show that area.”

The first shot hits Rhaegal in the chest, which injures him and throws him off balance. In rapid succession, he’s hit in the wing and then through the throat.

“In terms of that distance firing the bolt, obviously it was a lucky shot and you go with it and make it as dramatic and interesting as possible,” he said. “That last one really hit the main artery and neck, and we figured that’s when all the blood would be coming out.”

“I think because it was a fantasy creature, it easier for us to be really that dramatic. Because the thing was just going right by camera, it was a little bit more ‘Saving Private Ryan’ than anything else we’ve shot,” he continued. “There was talk about having blood in the water, but in the end I decided to not do that at all because then you get this weird pinkish stain in the water, and it wasn’t about that.”

The VFX team also makes Rhaegal’s death dramatic by working with the camera angle for the fall from the sky. “You are looking up, and once he gets hit, he starts falling toward camera,” he said. “Then we come around and it’s a 180-[degree] turn, so it sort of falls to a 180.” 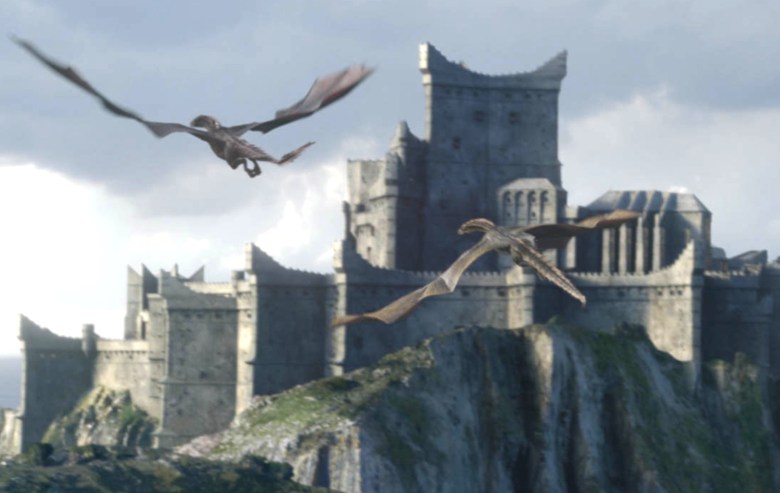 One of the biggest challenges of creating the death of Rhaegal didn’t have anything to do with the attack logistics, but the anatomy of the dragon itself.

“When I worked with WETA on the visual effects, the only thing that I was always concerned about especially was the position of the legs,” he said. “Have you ever seen those rubber chickens? I said, ‘Don’t make it look like that, with the dangling legs.’ Keep some tension in there so the dragon feels like it’s not quite dead yet until it really hits the water.”

Fangmeier also confirms that breathing fire wouldn’t have helped Drogon since the Scorpion-fired bolts have the greater reach.

“The only thing one might be able to do is to find the right angle of attack where the Scorpion just can’t point that high or that low, but dragon fire can probably go 100 feet,” said Fangemeier. “When you’re doing the shots over the Scorpion looking up at her, she was at least in a half a mile or so; it’s a significantly greater distance that you could possibly reach. With dragon fire, you have to get really low as you might remember from the loot train [in Season 7]. So it’s definitely something that has limitations in terms of range.”

Dragon was outnumbered. Even if he had set fire to Euron, the fleet had several Scorpions firing on him from different angles. In the end, viewers are left with the image of yet another magnificent creature falling from the sky.

“You don’t have a real-life reference of what a big flying animal of that size, how it gets hit in mid-air and then tumbles down. So it was just getting that animation to look right. [Showrunners] Dan [Weiss] and David [Benioff] said it was one of the Top 5 favorite dragon shots in all ‘Game of Thrones.’”

Take a look at behind-the-scenes footage of the fall of Rhaegal below:

”Game of Thrones” airs Sundays at 9 p.m. ET on HBO

This Article is related to: Television and tagged Game of Thrones, HBO, Stefen Fangmeier, TV Interviews