Brienne was featured in one of the final season's best moments and one of its most polarizing. 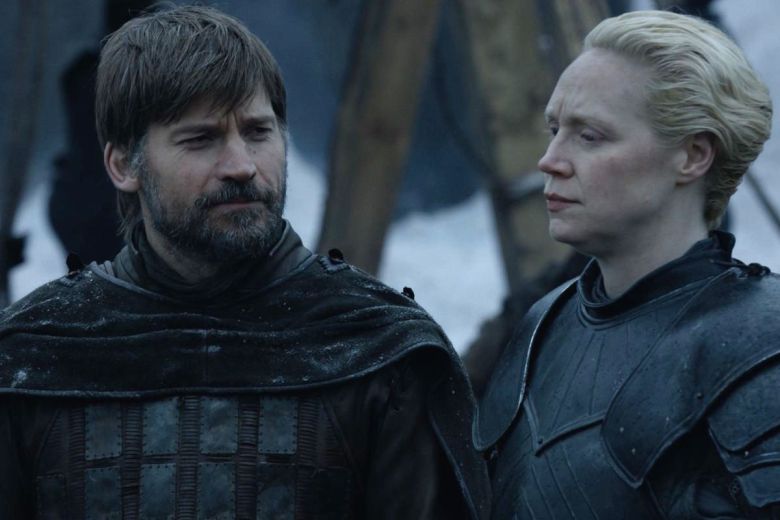 Gwendoline Christie had one of the best moments in the final season of “Game of Thrones” when her character, Brienne of Tarth, was officially knighted on the eve before the Battle of Winterfell. Now the character is at the center of one of the season’s most polarizing decisions when in episode four, “The Last of the Starks,” Brienne lost her virginity to Jaime Lannister (Nikolaj Coster-Waldau). Many “Thrones” fans have never seen the friendship between Jaime and Brienne as sexual, and Christie reacted to the surprise love scene by telling Entertainment Weekly it somehow made sense in its own way given the characters’ circumstance.

“She’s never had a relationship before and he’s only had a relationship with his sister. So you’re dealing with two people who are not terribly functional in the emotional world,” Christie said. “I think going through sharing the experience of surviving [the Battle of Winterfell] together and saving each others’ lives continuously proves to be a very heady combination. Physicality often releases emotion and I think that’s what happens — working together unlocked them.”

The scene echoed an earlier one from Season 8 in which Arya Stark (Maisie Williams) lost her virginity to Gendry (Joe Dempsey). Both Brienne and Arya are two of the most powerful women on the show and had never been featured in a sexual manner on the series until these final episodes. Christie said Brienne losing her virginity makes the character more “three dimensional,” and she championed the idea of Brienne being the driving force behind the decision.

“I felt it was important to see a moment of choice from Brienne where she chooses to do this,” Christie said. “It’s important that she choose to explore life in that way and have that experience. I was pleased that if something happens between her and another character that she wants it. I like that she instigated it. As an unconventional woman that we’ve seen grow, I enjoy that she decided to grow in a different way.”

Christie continued by saying the scene “gives [Brienne] the agency to explore all the different elements of her life. She’s not just a woman who can fight incredibly well and doesn’t have any need for anything else. She is a woman, she’s a human, she fights brilliantly, she also has some desire of companionship and sensual love.”

While the show had Brienne lose her virginity to Jaime, Christie was hoping for a different outcome. “She’s a woman and that means she has a sex drive so why shouldn’t she explore it?” the actress said. “Personally, I always wanted to see her get together with Dany. That’s what I wanted, always! Wouldn’t that have been amazing?”

The final season of “Game of Thrones” continues Sunday at 9pm ET on HBO.

This Article is related to: Film and tagged Game of Thrones, Gwendoline Christie