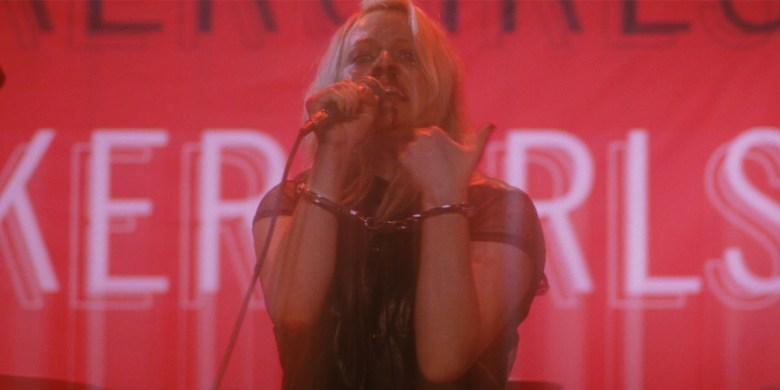 Most times, when a movie or TV show features a fictional band, it takes months or even years for an enterprising artist to design fake merchandise for sale on an unaffiliated third-party apparel outfit. For “Her Smell,” the recent indie drama starring Elisabeth Moss, that wait is a lot closer to non-existent.

As the film makes its way through various theaters across the country, “Her Smell” now has an official merch store, complete with music and apparel from the world of the movie. Directed by screenwriter (and burgeoning awards pundit) Alex Ross Perry, the film follows the trajectory of fictional punk singer Becky Something (Moss). As she navigates the twin burdens of addiction and artistic expectations, the movie tracks Becky’s evolution, as well as those of her band Something She and ascending colleagues The Akergirls.

The collection is a mirror of the merch design in the film. (The one exception is an enamel pin with the title screen logo, as seen in the beginning of the movie.) There’s a handful of Something She and Akergirls shirts, album-specific and otherwise. There’s even one for the fictional record label that yields a major conflict in the story.

All the shirts have appeared “Her Smell” and were all designed by New York-based artist Teddy Blanks. In addition to having a hand in some of the best podcast logos around, Blanks also designed the title sequences for “Lady Bird” and Perry’s previous films “Listen Up Philip” and “Queen of Earth,” the latter also starring Moss.

For those not inclined toward shirts without sleeves or buttons, the “Her Smell” shop also has a few ways to own the soundtrack to the film. Vinyl albums are available, including a double-LP of Keegan DeWitt’s score. (In addition to helping create the songs for last year’s Brett Haley film “Hearts Beat Loud,” DeWitt is also a longtime Perry collaborator, having composed music for three of his previous features.) The quartet of original songs written and produced for the film can be found on either a 7″ or a limited-batch cassette mixtape.

This Article is related to: Film and tagged Alex Ross Perry, Elisabeth Moss, Her Smell