Cannes: The Palestinian filmmaker's first movie in a decade is another insightful deadpan odyssey. 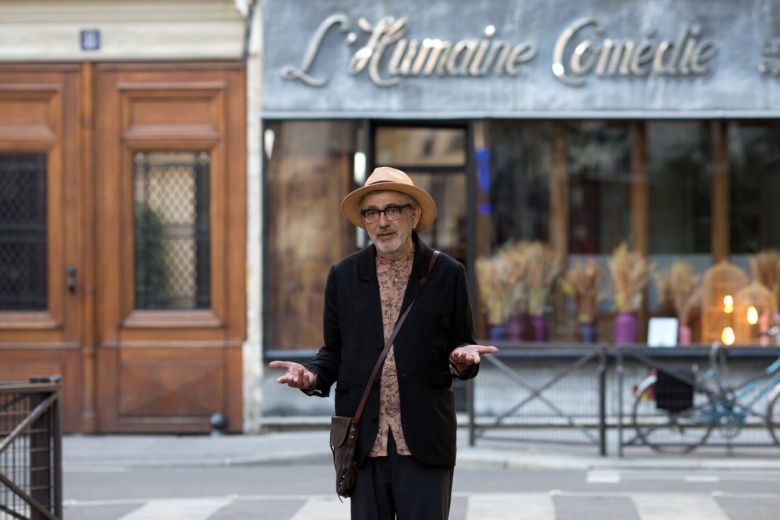 “It Must Be Heaven”

Elia Suleiman is in every scene of “It Must Be Heaven,” but he only speaks four words. The writer-director-star finds himself in a New York taxi cab in the midst of a globe-trotting journey after fleeing his drab routine back home. Asked where he comes from, he replies, “Nazareth,” then clarifies: “I am Palestinian.” And that’s pretty much all you need to know. For the rest of the movie, Suleiman’s deadpan stare says it all, as the slapstick auteur’s latest installment in his ongoing chronicle of Palestinian identity settles into his usual playful routine. Once again, the Chaplinesque Suleiman drifts through an ambivalent world, and his solemn expression does the bulk of the talking.

Suleiman’s always a reliable charmer, with a penchant for funneling the language of Jacques Tati and Buster Keaton into moving-image editorials about his troubled homeland. However, a decade has passed since his last insightful riff on occupation with the haunting meditation on the Israeli-Palestinian conflict with “The Time That Remains,” and “It Must Be Heaven” addresses that gap head-on. This poignant, minor-key work from the only major filmmaker to carry the torch of silent comedy into the 21st century is rich with feeling, even as it enters a self-reflexive zone that sometimes distracts from the legitimate concerns at its core. As Suleiman wanders from Paris to New York, “It Must Be Heaven” amounts to a meta film that explains why he doesn’t make movies more often, and presents a very solid case for why he should.

The opening of “It Must Be Heaven” is a perfect distillation of Suleiman charm: The star — a little grayer, his gait a little slower, but with the same unmistakable sad eyes — roams his property and the surrounding quiet neighborhood, absorbing the malaise around him. In the mornings, a man casually steals lemons from his yard, and sometimes just hacks away at the tree. (It doesn’t take much to parse the clunky metaphor of pilfered land, but Suleiman’s visually-driven storytelling doesn’t exactly embrace the values of subtlety.) He’s surrounded by bad vibes: neighbors trading lame insults into the night, crude confrontations with Israeli thugs at the local bar, a crazed local wandering the streets proclaiming nonsense. Suleiman gazes at each of these events with his usual downcast look, but this time, the cumulative effect is a call to action. As the music swells, Suleiman packs his bags and hits the road.

Mileage will vary on the first passages of this whimsical travelogue, which finds Suleiman venturing from Paris to New York in a rocky attempt to pitch the very movie unfolding here. But the filmmaker (aided by brilliant cinematographer Sofian El Fani, whose credits include “Timbuktu” and “Blue Is the Warmest Color”) has such conviction in this droll approach that “It Must Be Heaven” instantly settles into an appealing rhythm. En route to the airport, Suleiman pulls over to stand in the middle of a golden field, and stares out at a yawning sea. It’s a magical encapsulation of the escape fantasy that Suleiman magnifies with the journey to come, as he starts to realize that nowhere he goes can replicate his intimate affections for his homeland.

Suleiman’s fixation on the Palestinian in exile shares some DNA with “Synonyms,” Israeli director Nadav Lapid’s recent acclaimed film about an Israeli adrift in Europe. But that darker, enigmatic effort has provoked powerful audience responses to its controversial approach, while Suleiman’s wistful tone is more straightforward in its aims. As Suleiman arrives in Paris, he finds an equally alienating city, where Europeans go about their days oblivious to the troubles of the wider world. Suleiman’s eye for visual gags are hit-or-miss, but he scores some vintage Suleimanian gags here, including an amusing bit involving police officers on seaways and a wry dig at a country’s generous healthcare system, with an uproarious segment that finds him watching a homeless man receive food from an ambulance as if he’s dining in an upscale eatery.

These fragmentary observations prove that Suleiman has a lot on his mind, and has been waiting for the right moment to pull it all together. “It Must Be Heaven” explores that challenge in witty referential terms, though they may strike some viewers as insider baseball. The filmmaker winds up in the offices of a French producer (played by Wild Bunch sales maverick Vincent Maraval) who shoots down the concept for “It Must Be Heaven” in a rambling monologue that leaves nothing up for discussion. “We wouldn’t want to do something too didactic,” he says. “That type of film wouldn’t be very commercial.” The irony, of course, is that Suleiman seems to be sealing his fate and celebrating the opportunity to get away with his vision at the same time.

In any case, Paris doesn’t work out, so he heads to New York for a similarly meandering passage filled with oddball encounters. At another producer’s office, he runs into Gael Garcia Bernal, who explains to a colleague Suleiman’s intentions of making a comedy about the Israeli-Palestinian conflict. The response: “It already sounds funny.”

While the observation may seem facetious in context, it makes perfect to anyone familiar with Suleiman’s routine since it solidified with his wondrous “Divine Intervention” in 2002. The filmmaker’s clever imagistic storytelling is steeped in one weighty observation after another wrapped in absurdist clothing. From a surreal encounter with a sparrow that comes through his window to a panel discussion at an Arab American forum drowned in robotic applause, Suleiman keeps finding new ways to apply his inscrutable impressions to new ways of evaluating his environment disconnect. The result is always the very particular melancholic humor that Suleiman thrives on.

The movie falters in one misconceived, sexist montage, which finds Suleiman eyeballing one woman after another as he takes in Paris’ sexy vibes. But if the filmmaker has been reduced to a pervy old man, that itself sits well with this complex look at the emotions of an artist untethered from his place in the world.

While “It Must Be Heaven” doesn’t exactly find a solution to the crisis of Palestinian identity, it does stand out as a somewhat more hopeful work than the director’s previous outings. In the movie’s insightful final stretch, Suleiman comes to terms with a new generation of Palestinians moving faster, and partying harder, into a future that he simply can’t fathom. And he finds some paths toward empowerment, none better than an outrageous gag involving a TSA agent’s invasive wand, which recalls the moment Suleiman pole-vaulted over an Israeli-Palestinian border wall in “The Time That Remains.” Suleiman positions these jokes as the ultimate fantasy, a means of making peace with an untenable situation and coming to terms with the idea that even an imperfect home is preferable to having none at all.

Suleiman closes “It Must Be Heaven” with a dedication to art critic John Berger, who died a few months before the movie’s Cannes premiere. Berger’s seminal text “Ways of Seeing” fixated on the way cultural ideology permeates images that we often take for granted. Suleiman elevates this concept to a higher plane, with inventing visual language so loaded with meaning it renders words useless. It’s also a warm, inquisitive approach that makes his world-weary mindset approachable. Suleiman may be upset about the state of the world, but at the expense of its entertainment value. By personalizes his hardships, he makes it possible to engage with his roving insights, and emerge from the other side wincing with laughter from bitter truths.

“It Must Be Heaven” premiered at the 2019 Cannes Film Festival. It is currently seeking distribution.

This Article is related to: Film and tagged Cannes, Elia Suleiman, It Must Be Heaven, Reviews