The comedian was blown away by winning a Peabody Award for her stand-up special "Hannah Gadsby: Nanette." 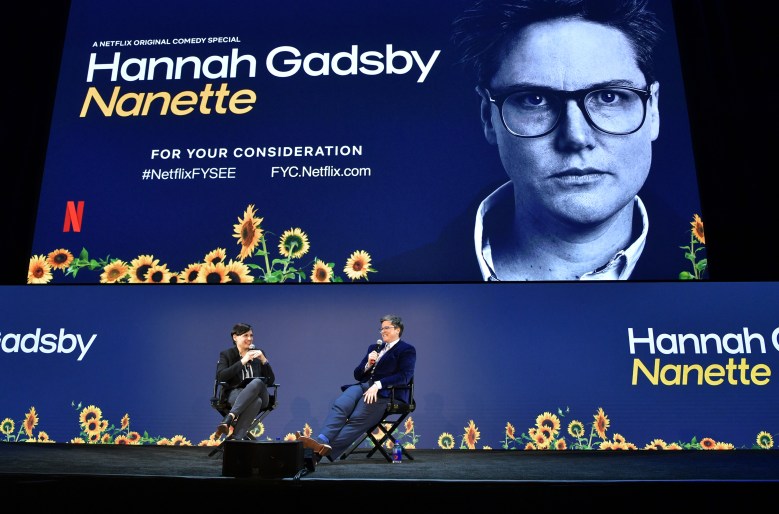 Hannah Gadsby has moved past her zeitgeist-capturing stand-up special “Nanette.”

In fairness, it’s been two years since the Australian comedian was regularly performing the set, which revealed intensely personal incidents from Gadsby’s past, coupled with social commentary on the continued other-ing of LGBTQ+ individuals, and a year since “Nanette” went viral after premiering on Netflix.

But as accolades keep accumulating for the special, which recently earned a Peabody Award, the comedian is forced to wrap her head around the continued affection for her stand-up.

“It feels kind of mind blowing,” Gadsby told IndieWire about the Peabody honor. “I am constantly astounded at what ‘Nanette’ has done out in the world.”

“When I did tour the show as a live piece, it felt like I was in the trenches with the show,” she said. “When it came out and it was reaching people and I didn’t have to deliver it personally, that was great.”

“It does feel odd because ‘Nanette’ was such an all-encompassing presence in my life for two years. I can’t actively think about all the things that I brought up in that show,” she continued. “It is a bit jarring sometimes when I’m reminded of what I did [with ‘Nanette’]. It’s sort of like, ‘Well, that’s bold. I did that.'”

But for now, Gadsby has shifted focus and has found the perfect home for her next stand-up special.

“I’m so excited to announce today that ‘Douglas’ will be released on Netflix in 2020,” Gadsby said at the Netflix FYSEE event held for Television Academy members on May 13. “I’m really enjoying touring with the live performance, but there will be places in the world that I won’t be able to visit, so it’s wonderful that Netflix will bring the show to every corner of the globe.”

Gadsby launched the U.S. leg of her tour for “Douglas,” which shares its name with one of her beloved dogs, on April 29 in San Francisco, and she’s scheduled to perform at the Theatre at the Ace Hotel in Los Angeles on July 12 and 13.

The comedian admitted “Douglas” will be a departure from what fans saw in “Nanette,” acknowledging that trying to top her previous success would be a fool’s errand.

“‘Douglas’ is much more friendly than ‘Nanette,’ she said. “A friendly little guy.”

This Article is related to: Awards and tagged Hannah Gadsby, Nanette, Netflix