The film is finally ready for its close-up at Cannes. 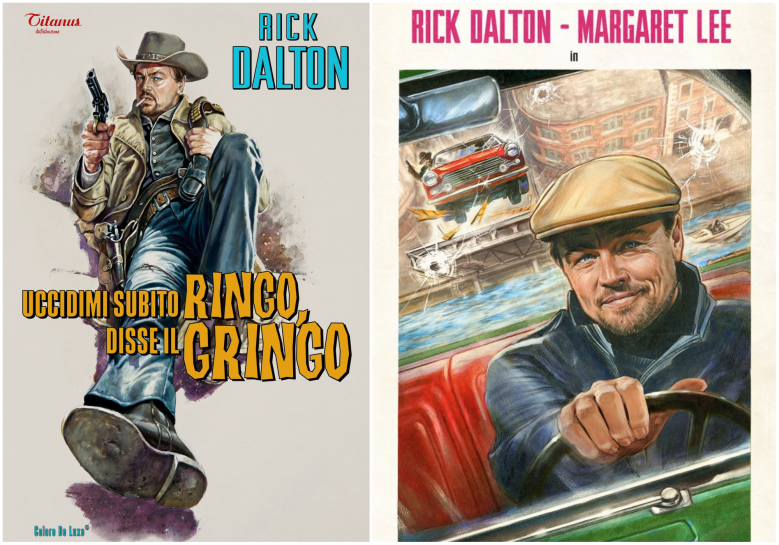 “Once Upon a Time in Hollywood” posters

After months of speculation, “Once Upon a Time in Hollywood” was officially added to the Cannes lineup earlier this month. Ahead of its long-awaited premiere on the Croisette this week, the film has two new posters showing off Leonardo DiCaprio’s aging-movie-star character in all his glory.

The first of them announces, “Witness Rick Dalton and Margaret Lee together in Columbia-Euro’s latest motion picture, ‘Operazione Dyn-o-mite!'” Then there’s the second: “Straight from Italy comes ‘Kill Me Now Ringo, Said The Gringo,’ now showing in a multiplex near you.”

The Italian titles shown on the posters — not just “Operazione Dyn-o-Mite!” but also “Uccidimi Subito Ringo, Disse Il Gringo” —  are likely a callback to the Spaghetti Westerns with which Tarantino and so many others are enamored, namely the “Dollars” trilogy comprised of “A Fistful of Dollars,” “For a Few Dollars More,” and “The Good, the Bad and the Ugly.” That particular subgenre is so named because the films in question were made by Italian filmmakers, most notably Sergio Leone.

The film’s Cannes premiere is especially significant given the timing, as “Pulp Fiction” won the Palme d’Or 25 years ago. “We were afraid the film would not be ready, as it wouldn’t be released until late July, but Quentin Tarantino, who has not left the editing room in four months, is a real, loyal and punctual child of Cannes,” Cannes executive Thierry Frémaux said in a statement announcing the late inclusion of “Hollywood.” “Like for ‘Inglourious Basterds,’ he’ll definitely be there – 25 years after the Palme d’Or for ‘Pulp Fiction’ – with a finished film screened in 35mm and his cast in tow.”

“His film is a love letter to the Hollywood of his childhood, a rock music tour of 1969, and an ode to cinema as a whole,” Frémaux said. “In addition to thanking Quentin and his crew for spending days and nights in the editing room, the festival wants to give special thanks to the teams at Sony Pictures, who made all of this possible.”

Straight from Italy comes “Kill Me Now Ringo, Said The Gringo,” now showing in a multiplex near you. pic.twitter.com/8DDxcgJvuw

This Article is related to: Film and tagged Leonardo DiCaprio, Once Upon a Time in Hollywood, Quentin Tarantino