"I feel very good about the way it turned out," Howard says just over a year after the film bombed at the box office. 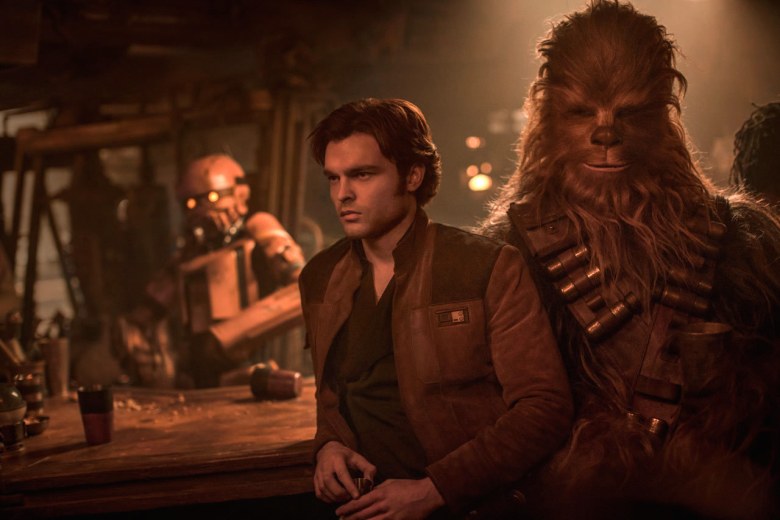 Ron Howard’s “Solo” opened last Memorial Day weekend and brought the “Star Wars” film franchise to a worrisome halt after the rapid fire successes of “Star Wars: The Force Awakens,” “Rogue One,” and “The Last Jedi.” Howard’s prequel movie bombed at the box office with just $392 million worldwide, barely making a profit for Disney based on its near $300 million production budget. The lackluster response to “Solo” was “disappointing,” Howard says during an appearance on MTV’s “Happy Sad Confused” podcast, but he maintains the film was not the disaster many headlines made it out to be in 2018.

“It made a lot of money, it just didn’t live up to expectations,” Howard said. “I came in eager to help, felt like I could, and had a blast. Normally it takes three years, I worked eight months and had an experience. I feel very good about the way it turned out. I loved the way it played to audiences, which I witnessed. All of that I am able to feel good about.”

So why did “Solo” fail to live up to expectations? Howard came up with three reasons while speaking to “Happy Sad Confused” host Josh Horowitz. The first is the film’s Memorial Day release date. The three previous “Star Wars” movies all opened during the Christmas holiday season to huge box office numbers. “Solo” opted to open in the more competitive summer movie season, and only five months after “The Last Jedi” opened in theaters. Howard estimates “Star Wars” fatigue was a real thing, as was fan apprehension towards a “Star Wars” prequel.

“Maybe it’s the idea that it’s too nostalgic,” Howard said about the second reasons. “That going back and revisiting an origin story for a beloved character may not be what the fans were looking for. It seemed to me looking at the opening, big but not as big as the others, I think that was [only] the hardcore fans. [The drop-off] tells you how many people are tagalongs who need to wait to see what people think or if it’s essential, if it’s a zeitgeist movie or not. It didn’t hit the zeitgeist, for whatever reason.”

The third reason Howard mentioned is “aggressive trolling,” which seemingly every giant franchise movie has to face in the weeks up to release. “Not so much the Twitter feed,” the director said, “but it was notable prior to the release of the movie in several of the algorithms, whether it was Metacritic or Rotten Tomatoes. There was an inordinate push down on the ‘want to see’ and on the fan voting. Some friends from Silicon Valley explained to me how it works. Under that circumstance, I did not take it personally at all but I felt badly.”

The hostile reaction over “Solo” has seemed to cool down in the past year. Howard doesn’t know for sure but he thinks the backlash against “The Last Jedi” could have exacerbated the trolling “Solo” faced prior to release, which is hard to argue against. Howard replaced fired directors Phil Lord and Chris Miller on the movie, but he revealed the filmmaking duo saw a cut of the film and were able to weigh in with their thoughts.

“They were executive producers on it,” Howard said. “They did see a cut and give me some notes, they did give feedback. It was all very collegial…It had to be awful for them. It’s a shame things went down the way they did. I had a creative experience, I’m grateful.”

Next up for the “Star Wars” franchise is the release of “The Rise of Skywalker,” in theaters nationwide December 20.

This Article is related to: Film and tagged Ron Howard, Solo, Star Wars