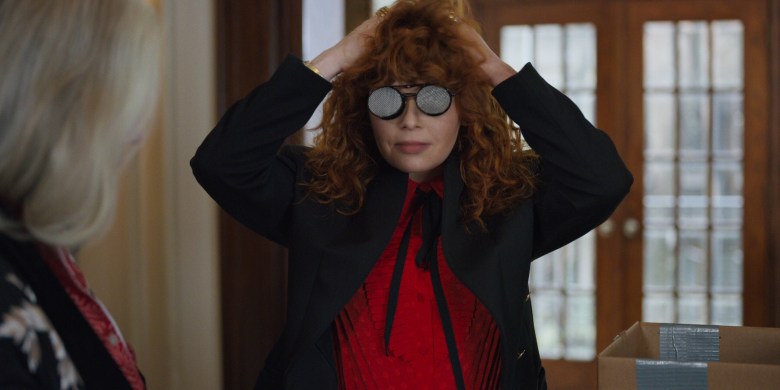 What’s so riveting about Netflix’s “Russian Doll” is the voice at its center. Brainy narcissist trash-talking hard-living game coder Nadia Vulvokov (Natasha Lyonne) seems to be completely out of control throughout the dizzying rush of eight half-hour episodes, which were tailor-made to binge. The series flies at you with such a saturated flurry of images, sex and death shocks and Altman-speed profane dialogue that it feels exploded out of a cannon. Which belies its precise craftsmanship.

The ever-expanding universe of television programming has created huge demand for shows that pop and grab, that aren’t the same as everything else. You haven’t seen “Russian Doll” before, its brazen female anti-hero, its bravura style. “Nadia was this character I’d created long before ‘Russian Doll,'” said Lyonne, who’s been seeped in show business for 35 years with one dramatic break for rehab. “She’s my alter ego Nadia, after Nadia Comăneci. She was already this superhero version of me, like a fantasy world I would inhabit. It was clearly an existential show surrounding this tough guy person, who is like Joe Pesci and Giulietta Masina had a baby.” 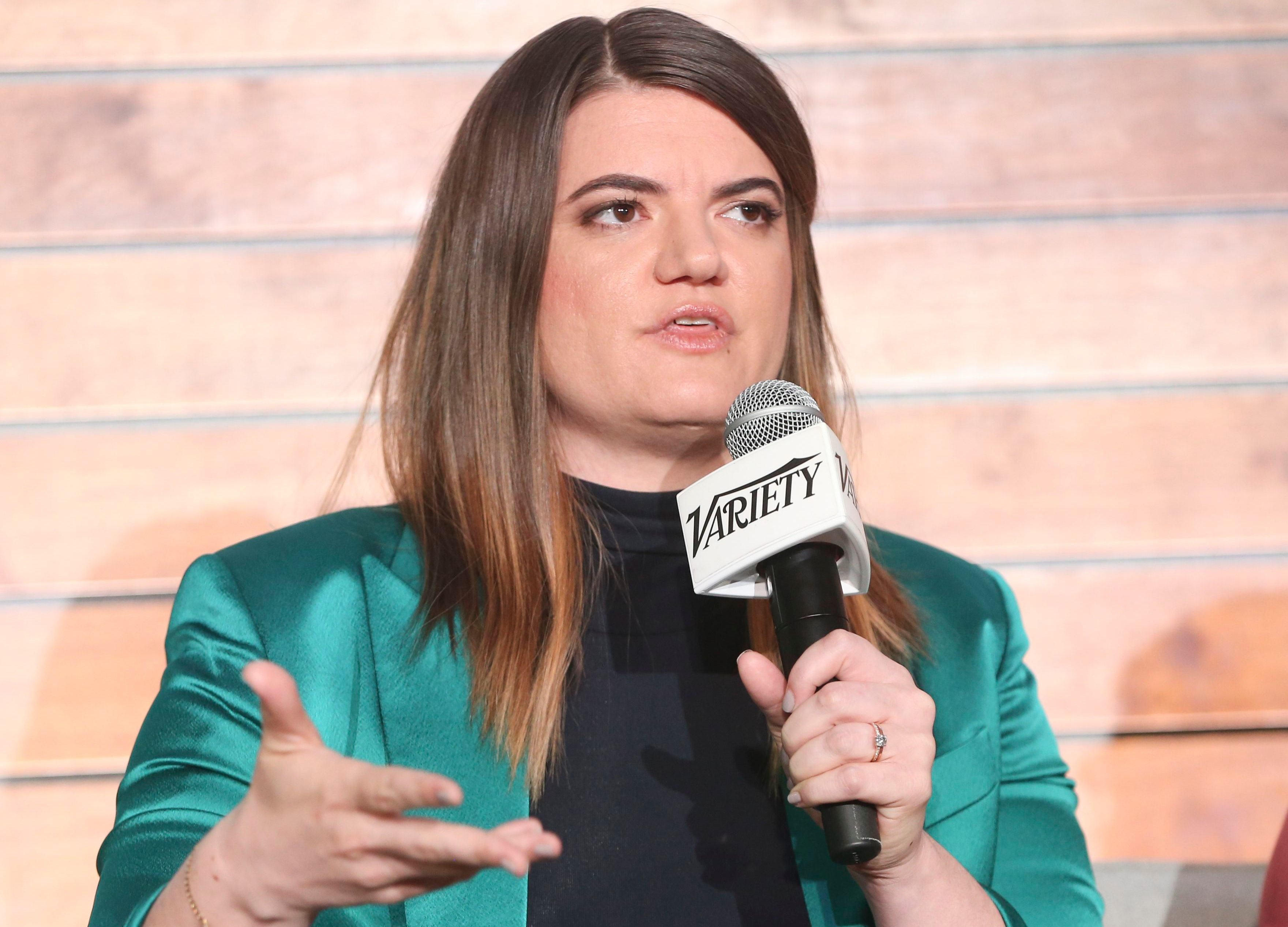 “Russian Doll” is entirely created by women, from executive producers Lyonne (“The Slums of Beverly Hills,” “American Pie”) and Amy Poehler (“Parks and Recreation”) to showrunner-director Leslye Headland, who cut her teeth on such raunchy rebel-femme indies as “Bachelorette” and “Sleeping With Other People” before taking over the all-female “Russian Doll” writers’ room. And it could only have been made at Netflix. “It was important to me to create a brain trust was a really a safe place for us to get to make the things that we want to make,” said Lyonne. “Amy, Leslye and I are three of the most macho ladies you are likely to meet.”

After “Sleeping With Other People,” Lyonne told Headland, “You are one of the great directors. If you don’t let your freak flag fly, you’re going to go crazy and lose your mind.” “Russian Doll” is born out of a mutual appreciation for each other, which you don’t often see in film. “It’s always the male director with the female actress muse,” said Headland. “There’s a concept in our business that directing is a male talent that we as women get by having it passed down to us some way. You rarely get two women collaborating and emboldening each other. You don’t see a female director and female actor who are also producer, writer and director. We’re giving birth to this insane baby that does not make sense to anyone else but then makes sense to everybody.” 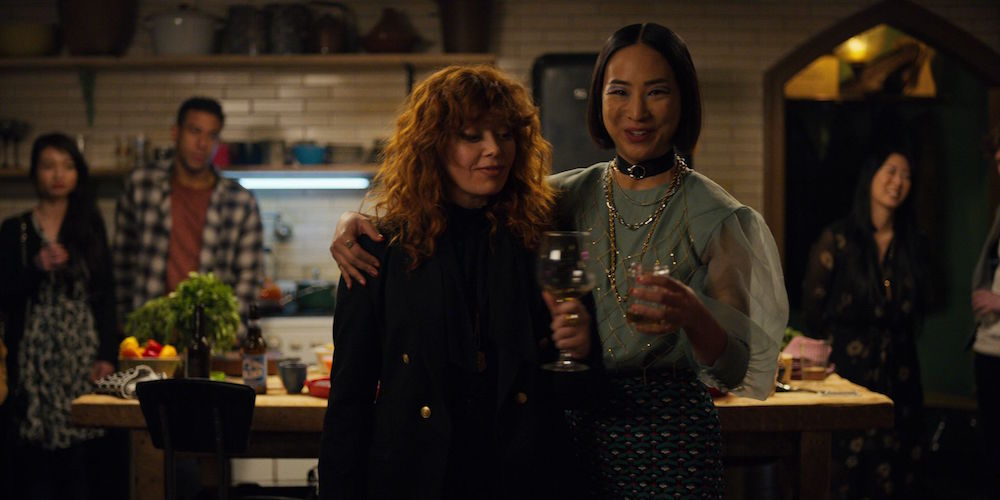 While Poehler did break away to make Netflix’s “Wine Country,” she was still involved throughout, making notes on drafts, pitching jokes. The entire team was serving one goal: give Lyonne license to kill. The series was intended as a vehicle to showcase the multi-hyphenate, who wrote, directed, produced and starred in this series.

Five years ago, Poehler and Lyonne started developing “Russian Doll” out of the ashes of a discarded NBC pilot. Headland remembers a pal-to-pal conversation with Lyonne in her New York apartment when she was still in mourning. They started brainstorming about what the next thing would be. It had to be non-network, non-conventional, and bizarre.

“There’s something else for you,” she told Lyonne. “Another life for this character you love playing, a point of view will come through for your personality and charm. You’re such a huge, beam of pure energy. We’ve only tapped the surface.” 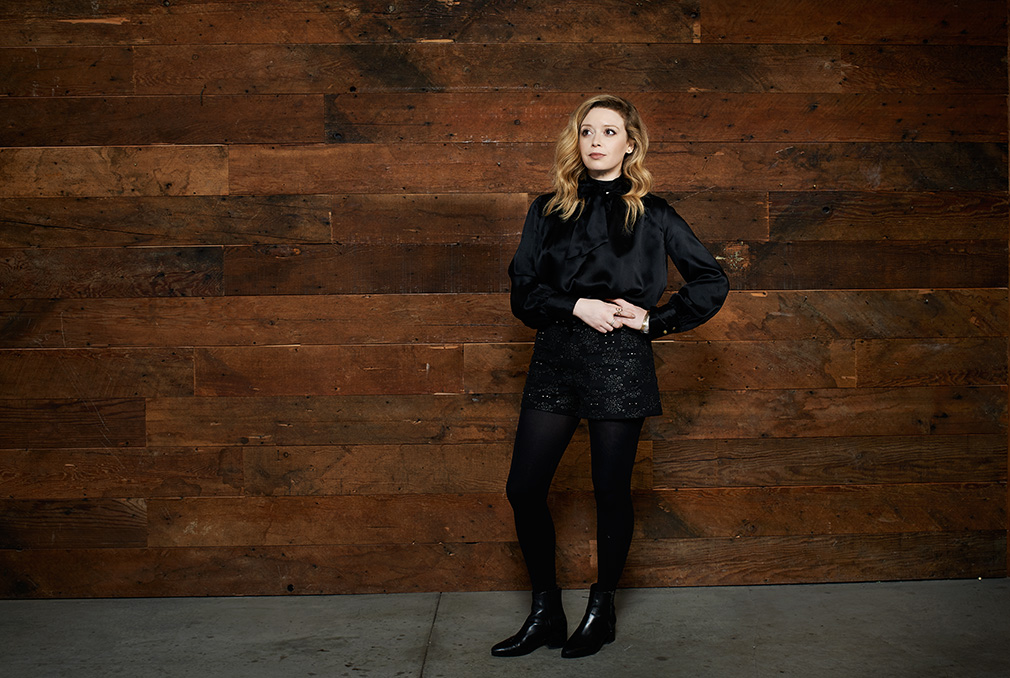 Poehler and Lyonne set “Russian Doll” (they had to fight for the iconic title) in a murky Lower East Side present, informed by the late ’70s, early ’80s. They developed a time loop idea, with shades of “Groundhog Day,” “Edge of Tomorrow,” “Source Code,” and “Run, Lola Run.” This time, Lyonne’s character keeps dying — via car crash, gas explosion, drowning, freezing, falling down stairs or down an air shaft, heart attack, or hit by an anvil from above like Wile E. Coyote — and popping back into her apartment bathroom at her 36th birthday party as if she had never left. In order to break the cycle, Nadia has to figure some shit out. “It’s a choose-your-own-adventure party,” said Lyonne, “where you make a series of choices.”

She wrote and moved flashcards around her apartment. And the scripts got complicated. They needed to be nailed down. Two and a half years later, Lyonne called in Headland to work with her in a mini-writer’s room with Flora Birnbaum to figure out the rule structure. “[If] she goes home with a different person every time she repeats the arc, it’s a series of short stories,” said Headland, who also has Nadia flashback to her dysfunctional childhood and crazy mom (Chloe Sevigny). “Amy suggested ‘Scenes from a Marriage’ as a touchstone.”

They pitched the series to Netflix TV content chief Cindy Holland, who greenlit the eight episodes, and never asked them to pull back, tone down or explain, said Headland. The feel at the “Russian Doll” writers’ room was very different from her previous experience on FX’s 2009-2010 series “Terriers,” which had seven men and two women. For one thing she had been a staff writer; now she was the boss. “When you’re the only woman in a writers’ room you wait until it’s time to talk and say your fully formed idea,” she said. 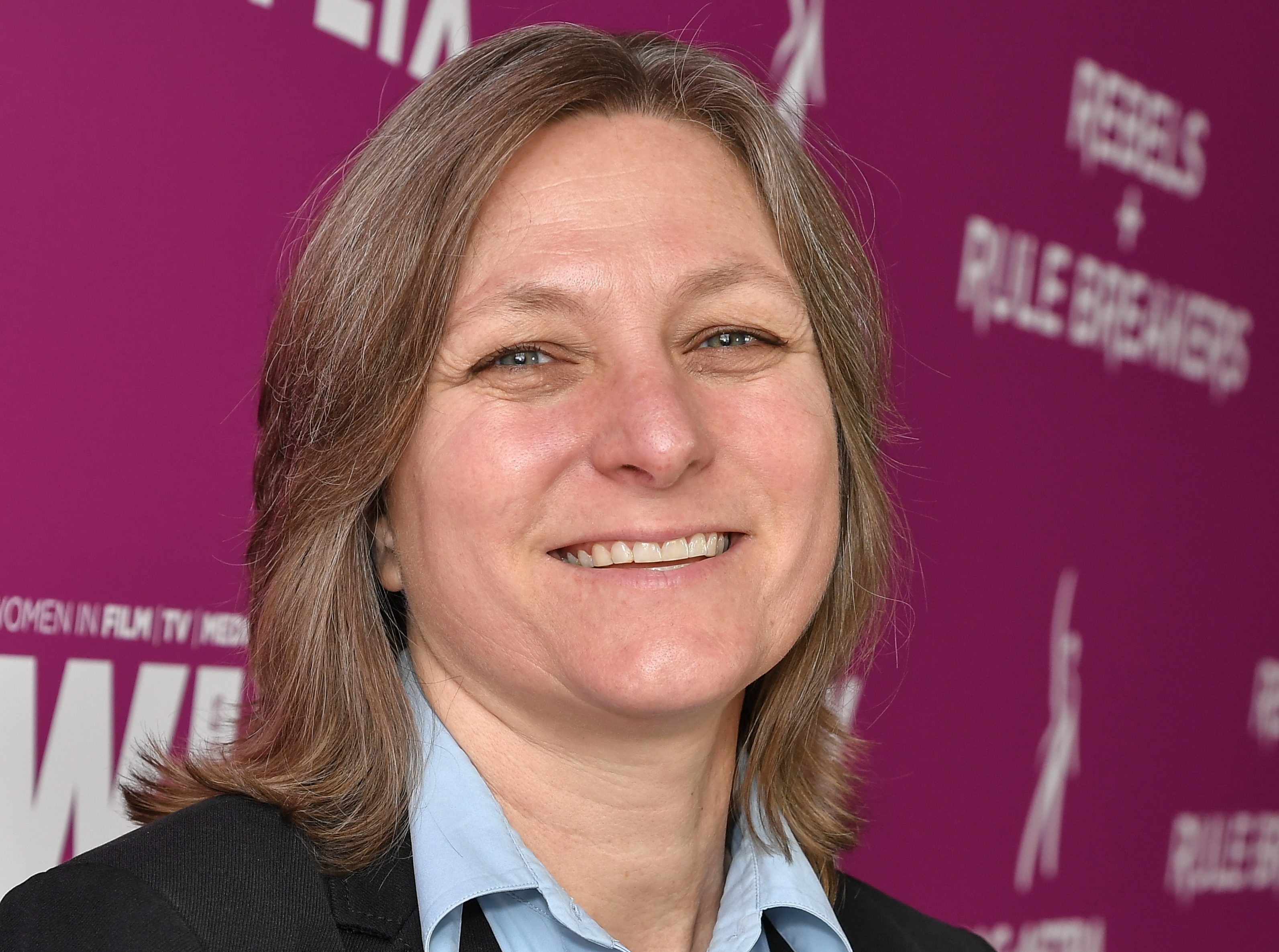 Writing “Russian Doll” felt very different, as the writers were tasked with solving how to raise the stakes for Nadia. “Everyone seemed to to talk freely, no one was editing their ideas,” said Headland. “I liked this loosey goosey, ‘Let’s argue about this thing. Who’s going to do what? Who’s in charge of what thing?’ It was much more organic and free, not without its conflicts, but also not hiding your light under a bushel. Everyone was shining at their highest level all the time.”

The writers gave free-wheeling, cynical, alpha-female Nadia a foil: sweet, passive, contained Alan (Charlie Barnett), who pops up in Episode Four and is linked to her in a death spiral; together they must plot their escape. And the writers added urgency as Nadia’s friends start to disappear from the party, as fruit starts to rot, as flowers start to wilt, as she continues to die and come back.

Harry Nilsson’s “Gotta Get Up” was always Lyonne and Headland’s first choice for the song that comes back every single time Nadia starts over, more than a dozen times. They could afford it, for one thing, but most importantly, “What was the song you will not get tired of?” asked Headland.

The goal of Nadia and Alan’s journey is to break the cycle. “Consciousness is looping,” said Headland, who pored over Douglas Hofstadter’s “I am a Strange Loop” while Lyonne leaned on Ellen Ullman’s “Life in Code.”  “It’s a positive thing or a negative thing, as these characters form habits that become subconscious urges, dangerous patterns they need to break. If the mind created a loop, you can’t solve the problem, you need another person, a different type of experience. You need to see it in someone else, become vulnerable with other people, whether a medical professional, best friend, or surrogate mom.”

Lyonne got a kick out of tackling “dark nights of the soul and brain-breaking stuff about moving from a disconnected to a connected existence, a nihilistic selfish approach to a sense of meaning and bringing the broken self along for the ride to an adult life, signing up and getting on the bus instead of being a dropout.”

The whole point was to “let go of that thing that holds women back, that we have all lived with for so many years,” said Headland. “We ripped off the constraints and went for it.” And that meant not following the rules men set for women in entertainment: “It’s not her Dad, it’s not a love story, it’s not about her career, it’s not a female-centric story that is going to adhere to any of these ideas.”

The show was a challenge to shoot on a modest budget in New York, three half-hours at a time. The loopy continuity issues kept the crew on their toes. Having directed TV series like “Heathers” and “Black Monday” was a big help, so Headland knew how to efficiently stage stunts and car chases. “With comedy, they don’t let you do prep.”

Headland did not want to direct all eight episodes, so she took on four, Jamie Babbitt handled three and Lyonne was committed to the finale. “This was brain-breaking back-breaking deeply challenging life affirming satisfying stuff,” said Lyonne. “I was obsessive; this is a lifetime of acquiring aesthetics and ideas and horrors. I found a perfect place for all these nightmares and joys.” l

What shocked Headland was the reaction to the series. She had made two indie films that were not constrained by these rules either, and received a muted “these women were kind of unpleasant,” “they were a little much for me” sort of reaction. She was prepared for the worst.

The difference is that “Russian Doll” had four hours instead of two. “There’s no way you could never get as deep with a movie,” said Headland, “one of the reasons it’s fun to work in this TV world, which is so different from the dictates of indie film or the studios. The heavenly thing about ‘Game of Thrones’ is its immersiveness. You want to live in and be there.”

Clearly, Netflix was receptive to this series in a way that many male television executives like ex-Amazon Studios chief Roy Price would not be. “Every time, if it wasn’t a mom in trouble or a wicked mom, it was a damsel in distress or a long-suffering mom,” said Headland. “A lot of them do not see us as vessels for complicated stories. We do need advocates, who are male or female. I just joked the other day, a female executive can be the silent killer. The notes we got on this show from Netflix were, ‘go weirder.'”

Now Headland is getting invited into rooms that she wasn’t in before. Going forward she has some choices to make. “One big want is autonomy,” she said. But as far as she’s concerned the limited platform release is owned by everyone who broke before 1999: Chris Nolan, Quentin Tarantino, Wes Anderson. “No one’s getting out of the little pool. There’s nowhere for them to go. They aren’t going to make a ‘Star Wars’ movie, and studios won’t make midlevel movies. These guys soak up all the energy and real estate that would go to the younger rising generation. It does feel fractured as an industry, but it’s attractive when you see Netflix pop up, this kind of self-contained studio and platform.”

Headland just turned in a draft to HBO Films she’s developing with Will Ferrell about the guy who blew the whistle on the FIFA scandal. And Netflix has brought the rights to Cambria Brockman’s YA novel “Tell Me Everything” from producer Michael Sugar for Headland to direct.

What makes Headland deliriously happy is the idea that “Russian Doll” “is now a comp. Other women can go in and pitch shows and say, ‘they had an all-female writers room and directors, a weird idea and an unlikeable female lead. Now they can go out and pitch what a female dreamed. It’s a chef’s kiss.”