"You can’t tell me what to do with my body," she said. 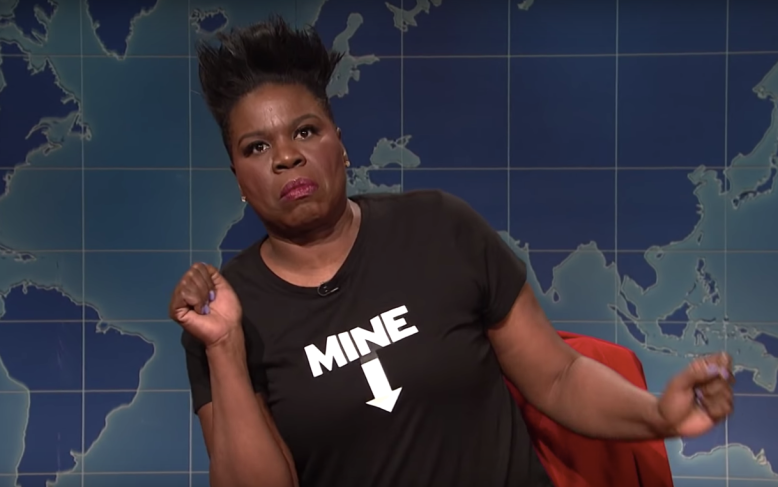 Following the news of Alabama’s aggressive anti-abortion law, which does not make exceptions for cases of rape and incest, Leslie Jones has a declaration: “We are all handmaids. My name actually is OfJost.”

The outspoken “Saturday Night Live” cast member made that announcement on “Weekend Update,” where she was flanked by Colin Jost while wearing the signature outfit from Hulu’s “The Handmaid’s Tale.” She then removed the red robe to reveal a t-shirt with the word “MINE” and an arrow pointing down.

“The next thing you know, I’m at Starbucks and they won’t take my credit card because I’m a woman instead of the regular reason, which is I don’t have no money on me,” she said.

The bill, which was passed with unanimous support from its 25 white male members, was preceded by similar measures in Ohio and Georgia and has proven hugely controversial. “This looks like the casting call of a Lipitor commercial,” Jones said after showing a picture of those men. “These look like mugshots of everyone arrested at a massage parlor.”

“You can’t control women because, I don’t know if y’all heard, but women are the same as humans. And I’m Leslie Dracarys Jones. I mean, Why do all of these weird-ass men care what women choose to do with their bodies anyway? I don’t care what you do with your 65-year-old droopy-ass balls. And how is Alabama’s woman governor going along with this?”

Jones concluded, “When women have a choice, women have freedom. The fact that nine states are doing this means this really is a war on women. And if you’re a woman out there, and you feel scared or confused, just know that you’re not alone…You can’t tell me what to do with my body. You can’t make me small or put me in a box.”

This Article is related to: Television and tagged Leslie Jones, Saturday Night Live