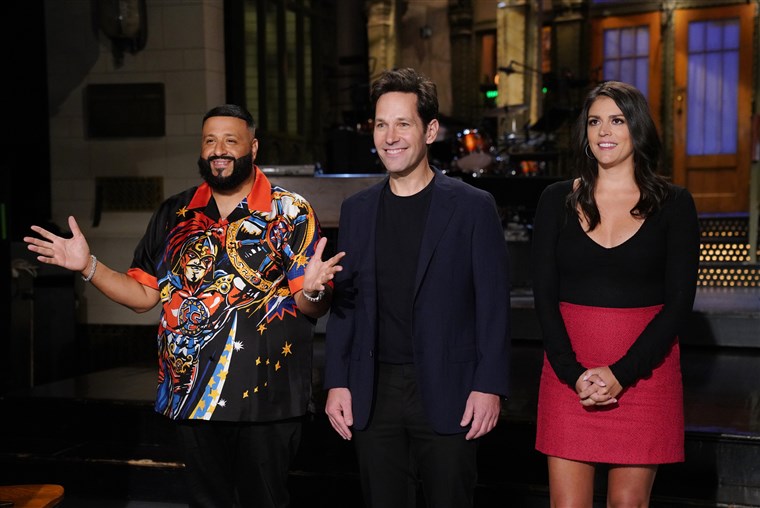 Paul Rudd’s fourth time hosting “Saturday Night Live” also coincides with the 44th season finale of the long-running (again, 44 seasons) late-night sketch comedy show. That’s not even a fun fact: It’s just a fact. Nothing special at all… which, unfortunately, kind of describes this season finale. It’s not Paul Rudd’s fault though, because Paul Rudd is a man who can make a spectacle out of something mundane (for celebrities) like going on “Conan.”

Perhaps more than any other celebrity, Paul Rudd has major Best Man Energy, which makes this the most perfect opening monologue one could ever have on “SNL.” Sure, this is a guy who can play a dirtbag and a weirdo among the best of them — which he does here, at least in the case of the latter — but the Rudd charm is that of a man who will give you a proper best man speech. (Which is basically what he was channeling with Bobby Newport on “Parks & Recreation,” only in a brainless way.) It only took three other hosting appearances for “SNL” to finally get that about the guy.

If there’s one sketch in this episode that deserves an Honorable Mention, it’s “Music Box.” At first, it’s your typical “SNL” sketch where one character knows an obscure, clearly fake song, only for the rest of the characters to realize they know the song too and sing along. It’s a simple premise and it’s always decently funny enough, but “Music Box” has little moments that just work before the sketch-ending twist. For example, the portrait of a broken home that Cecily Strong and Kyle Mooney paint, first through the fact that he’s clearly been lying to her about no longer drinking and then the runner throughout that he just won’t stop negging their daughter. (“I’m glad you didn’t sing, honey — you would’ve messed it up.” is priceless.) Paul Rudd as the enthusiastic antique shop owner who’s all in on the “Fancy Party” song actually sells it, a (catchy, honestly) song about a ballerina farting at a fancy party.

As mentioned, Paul Rudd can be a great best man (or, comedically, straight man), but he’s also great at being a little weirdo or a creep or a jerk. The girls’ slumber party leans more into the weirdo, as a single dad who’s definitely not doing his best… but that’s not actually the point of this sketch. So moments like him saying “salt” is one of the snacks or him trying to get the girls to chip in $5 for Thai food aren’t the focal point of the sketch. Which is strange because, any sketch where someone says, “You guys need me, I’ll be downstairs, working that Swiffer,” suggests that the character who said it should be focused on for a long, time.

But Paul Rudd is not the focus here. Instead, it’s a demon (played by Melissa Villaseñor, around the time it got really strange that Melissa was barely featured in this episode) summoned courtesy of a Ouija board. The bit of the demon (named Bealthor… which definitely has to be the weirdest attempt ever to get “Bea Arthur” into a sketch) being the outsider, weirdo “goth girl” at this party works, even though the sketch as a whole isn’t too memorable after the fact. Again, except for the Paul Rudd parts, which is just a good host sign.

Best Sketch(es) of The Night: “GoT Tribute” & “What’s Wrong with This Picture?”

But this sketch isn’t just great because of Paul Rudd, it’s a banger (mostly in the comedy sense) for Pete Davidson to end the season on. You know, the kind of reminder one needs for why he’s actually still a part of this show, other than his personal stuff. In fact, his early moment where he tells Kenan the reason he didn’t know he loved “Game of Thrones” is because he doesn’t like to talk about his personal life is a funny enough premise for the sketch before the actual premise happens. Once it does, there are bits like DJ Khaled putting his official stamp on the song (absolutely baffling Kenan), all the footage of “Grace & Frankie” (making Kenan worried about the “SNL” budget), and the very simple fact that the “Grace & Frankie” rap goes into the type of very specific detail a song about someone’s “favorite show” should go into.

The way the live audience genuinely cheers when Paul Rudd’s Louis actually gets the final picture right (“Rollerblades instead of ice skates”) is a rare moment in “SNL.” Sure, the audience enjoys sketches and laughs at them, but the way “What’s Wrong with This Picture?” continues to rise and rise in terms of these characters’ ridiculous (and not all in the same way) answers and Kenan Thompson’s (as “Elliott Pants”) frustration, it means a lot that the audience clearly takes that journey with them to the point of getting hyped just off that eventual moment where something right actually happens. Of course, it goes right back to ridiculous afterward, but that makes for the perfect end to a sketch that has truly climaxed.

Worst Sketch(es) of The Night: “The View: Pete Buttigieg”

There has never been anything gained by saying “‘Saturday Night Live’ was better when…” but in the case of its “The View” sketches, “Saturday Night Live” was good about actually making them funny when they existed in the ‘90s and specifically the early 2000s. Because that’s when “The View” was actually relevant enough, specifically in terms of people for the “SNL” cast to do impressions of. Sure, Whoopi Goldberg and Joy Behar are still on the show, but neither Leslie Jones nor Kate McKinnon, respectively, bring anything to those two big characters with these sketches, so what is the point?

Think about Kristen Wiig as Elisabeth Hasselbeck. That was a character with a perspective and an angle. The only angle Melissa Villaseñor’s person (Ana Navarro, who apparently exists) has is apparently that she gets stuck in loops? The lay-ups of these sketches should be Aidy Bryant as Meghan McCain, but with no one to even really push against—because McKinnon’s Joy is so passive she might as well not even be there—it’s not even a good parody of “The View.” Plus, the pacing is just bad in these sketches, with a lot of pauses that are only more pronounced by the fact that the audience isn’t laughing at all.

On the plus side, this sketch serves as a reminder that LeAnn Rimes “I Need You” still slaps. So there’s that.

Jeanine Pirro is far from Cecily Strong’s best character — especially on Weekend Update — but to be fair, it absolutely kills in this episode. It honestly looks like it will be more of the very loud same at first… and then the booze comes out. Really, this is what Strong’s Jeanine Pirro has been missing all along: prop comedy.

Seriously, all it took for the Pirro character to steal the show was for her to have an endless martini stock to spit take and toss on both Colin Jost (who she’s next to… and thinks his middle name is “Jessica”) and Michael Che (who she’s not next to… and thinks is Kenan). Both men are drenched by the end of the segment, and Strong truly should have taken a bow after this performance.

Strong’s also kind of the one really engaging part of the cold open — which finds a way to continue 2019’s desire to spit on Freddie Mercury’s grave, with its modified version of “Don’t Stop Me Now” — because while there’s a lot going on in it, even as Melania with the accent, she ends up being the only actually “good” part of the sketch. Yes, it’s not supposed to be “good” because it’s the whole Trump administration ruining Queen — and Robert De Niro continuing to exist on this show but not really exist in the sense of doing anything funny — but it sneaks out of Strong during this number. She draws attention during the cold open the whole time because of it.

By the way, it’s actually offensive to have this version of “Don’t Stop Me Now” on an episode of television with Paul Rudd. Leave these things to the master.

The combination of his love for “Grace & Frankie” and whatever the heck the deal is with his Bostonian (?) character in “What’s Wrong with This Picture?” are enough to lock down the top spot in this episode. Seriously, in a sketch where everyone but Kenan Thompson is very weird (and dumb), Pete Davidson’s Steven is the most fascinatingly weird (and dumb).

This is a solid episode of “Saturday Night Live,” and had it been any other episode (besides maybe the season premiere), it would have had a higher grade. But this is the season finale of season 44 of “SNL,” and other than a few bits about the summer — which really isn’t that exciting when you still actually have to work through the summer — you would have no idea this is the season finale. (Really, especially in the cold open, all these summer mentions play like a non-winking version of the “30 Rock” exchange: “What a year, huh?” “Lemon, it’s February.” And not even because of the Alec Baldwin of it all.) Paul Rudd is a great host, especially for a finale like this, but he and this episode deserve the fireworks factory, not a whimper into the summer.

Despite the rumors that this is Kate McKinnon’s last episode, you would also never know that either. In fact, if you were to hazard a guess about who’s leaving after this season, just based on this episode, it would honestly look like it’s Leslie Jones and Kyle Mooney… and that really can’t be the case, right? (Also, that sketch does make a good point: It’s odd “SNL” just stopped doing Leslie and Kyle sketches.)

And speaking of Leslie Jones, her appearance on Weekend Update may not involve spit takes and beverage tossing, but she certainly spits hot (righteous) fire during the segment. If the live audience wasn’t giving her a standing ovation during it, hopefully at least the people watching at home were.

This episode features another Ms. Rafferty sketch — which could supposedly suggest McKinnon’s saying goodbye to the character, but still, it really doesn’t — but unlike Ryan Gosling, Paul Rudd doesn’t break once. In fact, Rudd is insanely impressive in the way he not just doesn’t break but actually keeps characters once McKinnon is all over him. Really, the closest person to breaking the entire time is Aidy Bryant, but that’s just natural. (Meanwhile, Paul Rudd and Kenan Thompson both broke in the cut for time sketch.)

But also, the funniest aspect of that sketch is actually the runner of Rudd’s character’s complete love of Showtime.

Funnily enough, perhaps the most bro-tastic bit Colin Jost and Michael Che have on Weekend Update—writing inappropriate jokes for each other during the finale—is actually their best work as Weekend Update co-anchors. Instead of feeling like an ill-advised bit, the jokes are actually sharper, with more of an edge. And that’s specifically because of the bit. Colin Jost telling a Colin Jost rarely hits as hard as Colin Jost telling a Michael Che joke and vice versa. Because those jokes are intentionally safe and in their respective comfort zones. Pretty much the one consensus there is on “SNL” is that it could stand to be less safe and get out of its comfort zones.