The filmmaker returns with yet another bittersweet crowdpleaser about despondent families striving to make ends meet. 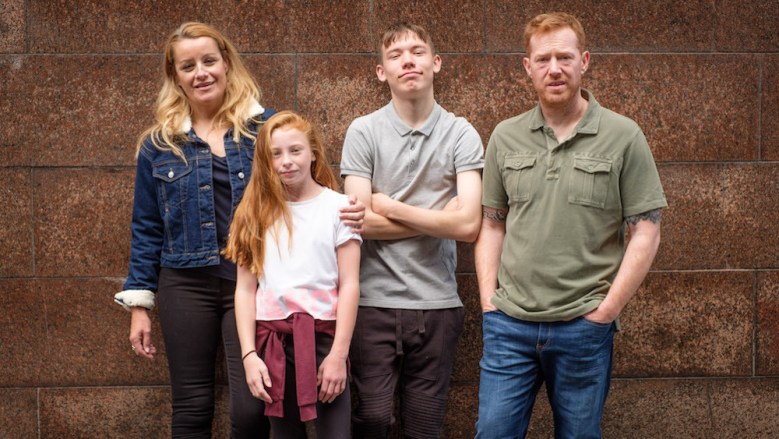 “Sorry We Missed You”

Kitchen-sink dramatist Ken Loach is our most dependable chronicler of working-class British frustrations. From 1966’s jittery “Cathy Come Home” to 2016’s Palme d’Or winner “I, Daniel Blake,” Loach creates sympathetic portraits of impoverished families as they eke out an existence in a society at odds with their needs. Loach is also not the most subtle filmmaker, but he grounds his intentions in emotional immediacy that lets the editorializing sink in.

“Sorry We Missed You” is the latest installment in this sprawling pantheon of cinematic activism, and delivers another tough, poignant look at desperate characters trapped by the only system that allows them to survive.

At its center is Ricky Turner (Kris Hitchen), an energetic family man with a questionable gig. As a delivery driver, he’s drawn into an arrangement with a company that encourages him to buy his own van, absorbing many expenses himself. Of course, Ricky’s new boss Gavin (Ross Brewster) spins the details like a pro. “You don’t work for us,” he says. “You work with us.” As if.

But Ricky doesn’t have time to question the details. Stuck in a cramped rental house with his wife Abbie (Debbie Honeywood), who works long shifts helping elderly and disabled people get through the day, Ricky dreams of raising enough funds to buy a new home. In his ramshackle sort of way, he maintains a fierce commitment to reaching the stability that has eluded them ever since the UK housing crisis ruined their dreams a decade earlier.

The Turners barely have time to coordinate their intimidating work schedules in tandem with raising their two children, fragile 11-year-old Lisa Jane (Katie Proctor) and rebellious teen Seb (Rhys Stone), who demand more parenting than Ricky and Abbie ever seem capable of slotting in. Seb has already become a particularly nagging resource drain, skipping school to vandalize the neighborhood, and accruing fees that further complicate the Turners’ tangled financial situation.

Ricky’s set up to struggle through a series of Job-like complications from the first scene, but like many Loachian protagonists, he’s determined to push forward. The first act of “Sorry to Miss You” finds the rascally deliveryman throwing himself into his fast-paced new gig, which requires him to deliver “precision” packages in perilous one-hour windows lest the company dock his pay. Snippets of his speedy routine reveal the cracks in his professionalism as Loach allows flashes of humor to seep into the scenario, including a slapstick attempt to evade a parking cop and a vulgar spat with a customer who turns out to be a rival soccer fan.

The punchlines also reveal the instability of Ricky’s job, which has been reverse-engineered to make him liable for the company’s needs, and they establish enough uncertainty about his situation to establish the foundation for the messy complications that follow.

“Sorry to Miss You” takes its cues from another careful, polished script from regular Loach scribe Paul Laverty, who assembles the story beats schedule, constructing a gripping portrait of the Turners’ despondence by establishing the small dramas that afflict them daily. The movie leaves plenty of room for Abbie as she contends with various clients hobbled by old age and abandonment issues, which explains her profound investment in keeping the family together at all costs. Ricky’s not so cautious, lashing out in angry tantrums whenever Seb causes more problems for the household and regularly sulking off to work.

Like father, like son: Seb never becomes a central figure in the movie except as a means of animating Ricky’s rage, but they both have real problems with authority. As the movie builds toward a series of confrontations between them, it delivers a credible look at the way workplace frustrations can reverberate on an intimate scale, and across generations. Even as it strains from an overly calculated plot, the family evolves into a bundle of intimate concerns.

Fortunately, Loach is a confident filmmaker whose keen visual sense hasn’t faded in the slightest. Taking material that could easily collapse into soap opera, he captures the intensity of Paul’s commitment through pure motion: Much of the movie finds the character darting through corridors and staircases, both keen on pulling off the impossible and and fleeing the responsibilities at home.

Eventually, “Sorry to Miss You” gives way to a series of somber twists, some more believable than others, which force Ricky to confront a harrowing crossroads. Despite the schematic nature of the buildup, Loach manages to deliver his brand of bittersweet crowdpleaser by making Ricky such a potent vessel for broader concerns. When he’s forced to contend with fees from the delivery company after unexpected events, he argues, “I thought it was my business.” The answer: “But it’s our franchise.”

The movie’s blunter developments might not hit quite as hard without such compelling actors. The filmmaker has a penchant for finding new faces who seem like they were born for the movies without ruining the material in overstatement. Hitchen gives Ricky a combustible quality that can make him charming in one scene and pathetic the next, while Honeywood takes charge during the movie’s final stretch with a domineering matriarchal spirit that suggests a long career ahead for a major discovery. Stone, as their troublemaking son, has the handsome features and brooding screen presence of a movie star waiting to happen. Together, the actors imbue the family with messy, conflicted values that ring true.

Eventually, “Sorry to Miss You” boxes these characters into a didactic plot, as Loach movies are wont to do. Loach and Laverty may as well break the fourth wall and explain how terrible it is that companies — and society as a whole — exploits desperate workers by tricking them into shouldering the burden of employment. When Abbie recalls how the couple was forced to give up their house, she adds: “Happened to a lot of people, didn’t it?”, as if Laverty felt the need to jab the audience with his elbow.

Still, some of those jabs sting. It can be easy to dismiss Loach’s formulaic approach, and the pressing concerns he embeds in his movies each time, but he excels at folding those themes into narratives far better than your average agitprop. The ideas operate in tandem with genuine pathos and an authentic core. “Sorry to Miss You” doesn’t break new ground for the filmmaker, but it radiates a timeliness that suggests an old-fashioned Ken Loach lament matters more than ever.

“Sorry We Missed You” premiered at the 2019 Cannes Film Festival. It is currently seeking distribution.

This Article is related to: Film and tagged Cannes, Ken Loach, Reviews, Sorry We Missed You