"Discovery" Season 2 was all about expanding and connecting the "Star Trek" universes, and the callout to "The Cage" provided editorial and VFX challenges. 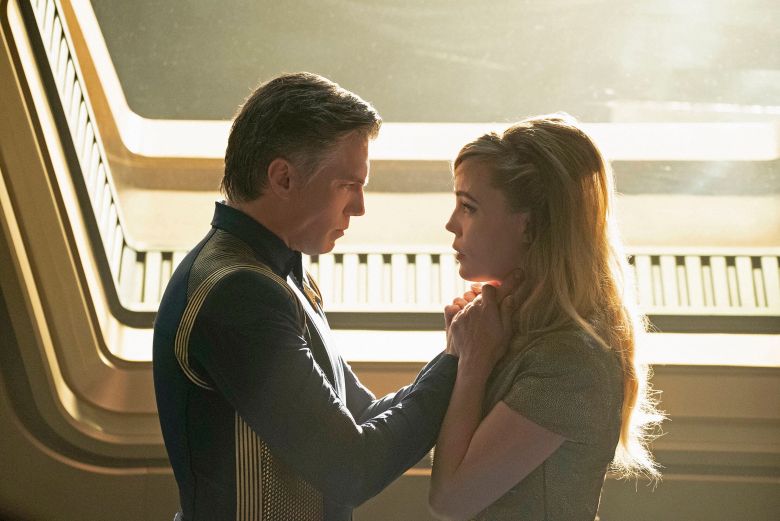 Season 2 of “Star Trek: Discovery” ambitiously played with the franchise’s multiverse through a series of dramatic interactions between the crews of the Discovery and Enterprise as they solved the mystery of The Red Angel threat from the future. And the centerpiece was the re-appearance of Anson Mount as original Enterprise captain Christopher Pike and Ethan Peck as a troubled young Spock dealing with his Vulcan/human identity crisis.

The highlight, though, was the surprising callback to the original series pilot, “The Cage,” in the form of a recap to the opening of the episode “If Memory Serves,” a semi-sequel in which they returned to Talos IV to heal fugitive Spock from his memory block. However, utilizing footage from the original series (TOS) provided additional editorial and visual effects challenges. 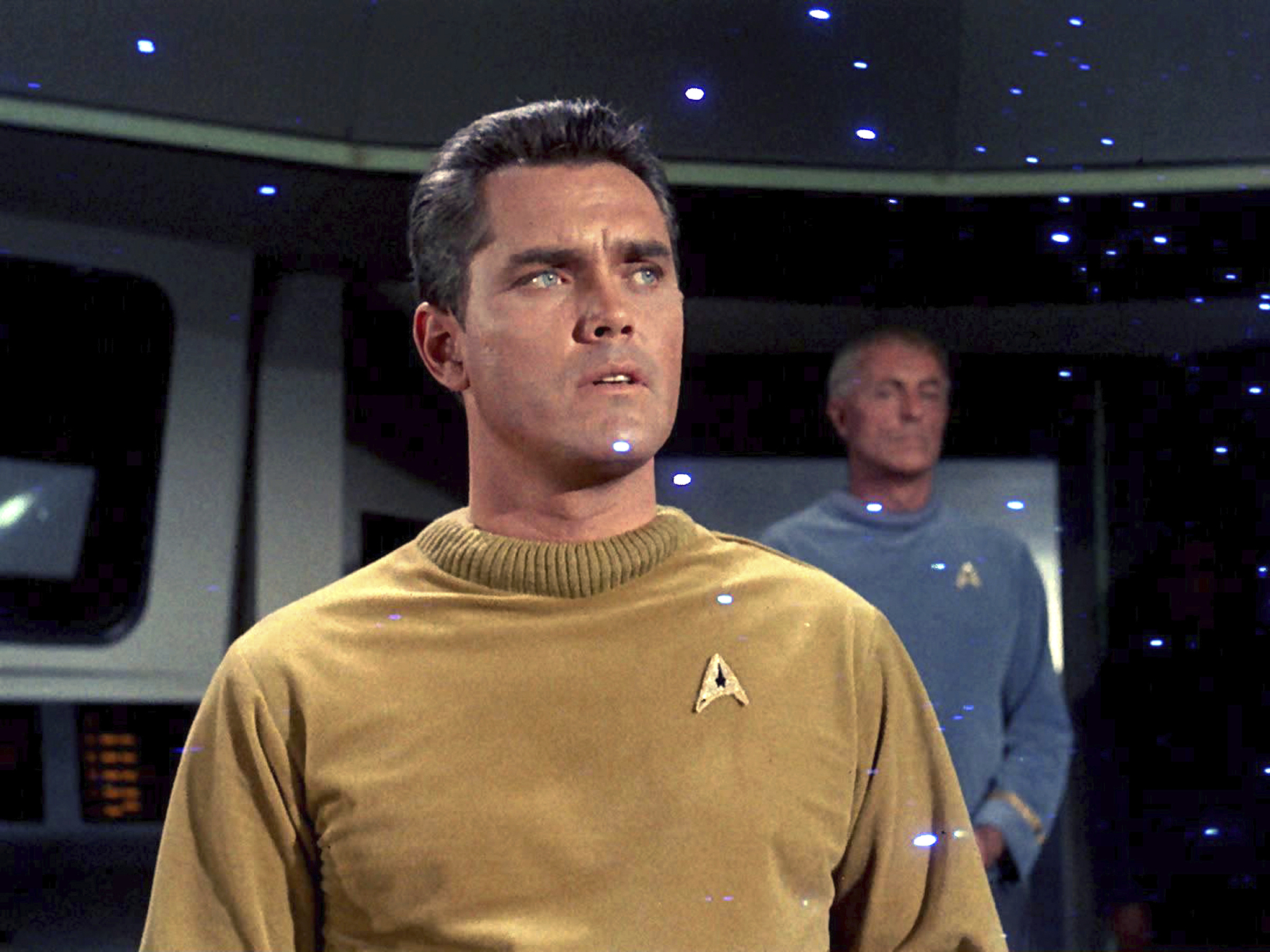 After editor Scott Gamzon cut the episode, he was approached by executive producer-director Olatunde Osunsanmi about utilizing TOS footage for a brief flashback for Pike (originally played by Jeffrey Hunter) in “a hyperstylized way.” But when it proved too complicated, Gamzon countered that they could open with a recap from the footage. The editor then re-watched “The Cage” and pulled clips for showrunner Alex Kurtzman to review, and it was decided that they could assemble the recap into a quasi-flashback for Pike.

“It started stirring up thoughts: How could we use this footage as more than just a nice Easter Egg for the fans to enjoy?” Gamzon said. “What’s the information that we want to tell? So setting up Vina [originally played by Susan Oliver and Melissa George in the episode] and Talosians, and the idea of what happened to Pike while he was there. And then finding that last shot of Jeffrey Hunter that could be used with Anson’s head in the same position made a nice transition as well.” 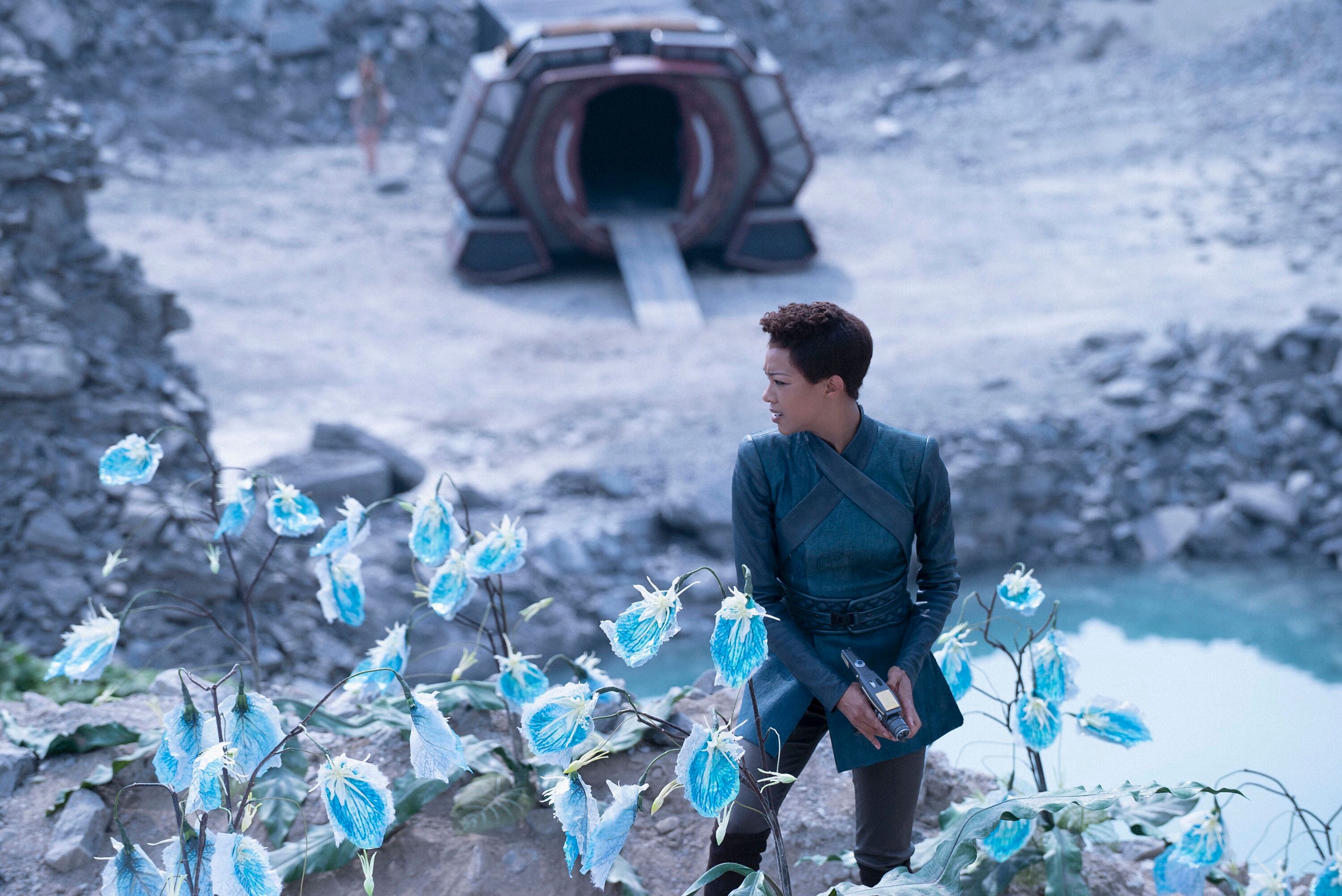 Once they agreed on the assortment of clips for the recap, Gamzon suggested using the original TOS orchestral score by Alexander Courage and George Duning. Meanwhile, John Mullin, the assistant editor, located original sound effects for the singing blue Talosian plants. And Kurtzman came up with the idea of using ’60s era transitions of sliding and revolving for the clips. The result was a bold contrast between retro and modern looks, but then it was handed off to the VFX team (led by supervisor Jason Zimmerman) to massage the footage.

“We wanted to sweeten it without taking away from how cool it was,” said Zimmerman, who was tasked with something very different from overseeing the dazzling CG animation for The Red Angel or the show’s trippy black hole. “We had an in-house artist apply a little bit of a treatment. It didn’t need too much.” As for the rest of the episode, the VFX was concerned with updating the iconic look of Talos IV without disrupting the familiarity. 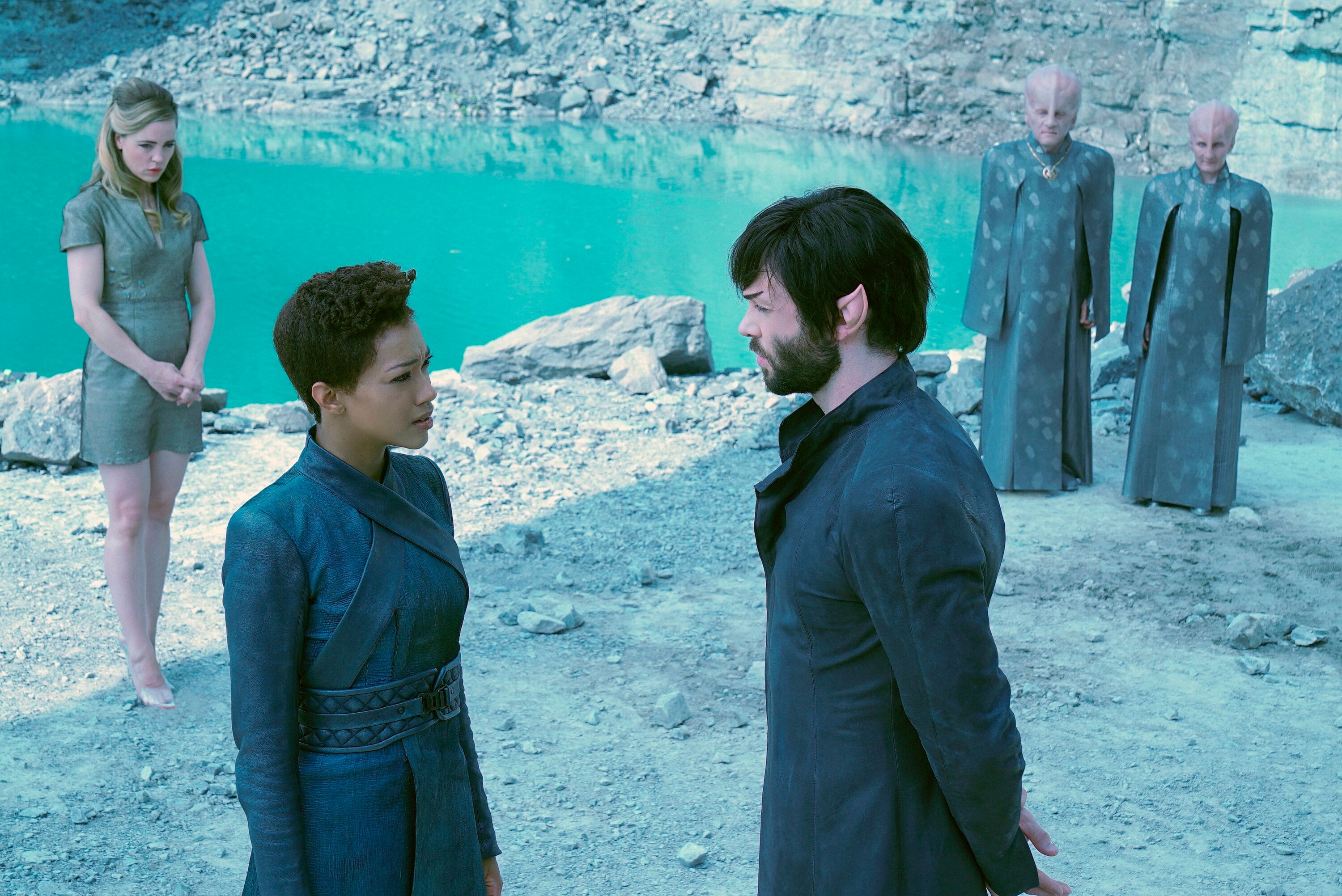 “We had a very well-known reference from the past for the plants,” Zimmerman added. “We spent a lot of time with what they looked like and the art department came up with a design for us and we did our version of how they would be a little more active for the original series without becoming the singing bush from ‘The Three Amigos’ or ‘The Little Shop of Horrors.’ We did many animation iterations and had some practical ones on top of them. That helps us with our compositing and integrating it in a way that makes it more realistic.”

For the landscape of Talos IV, it was also a matter of integrating with the practical set. “You go back and see this greenish hue to the sky from the original series, but, at the same time, you want to make subtle changes,” Zimmerman said. “We were aided by the DI to balance what it could look like.” 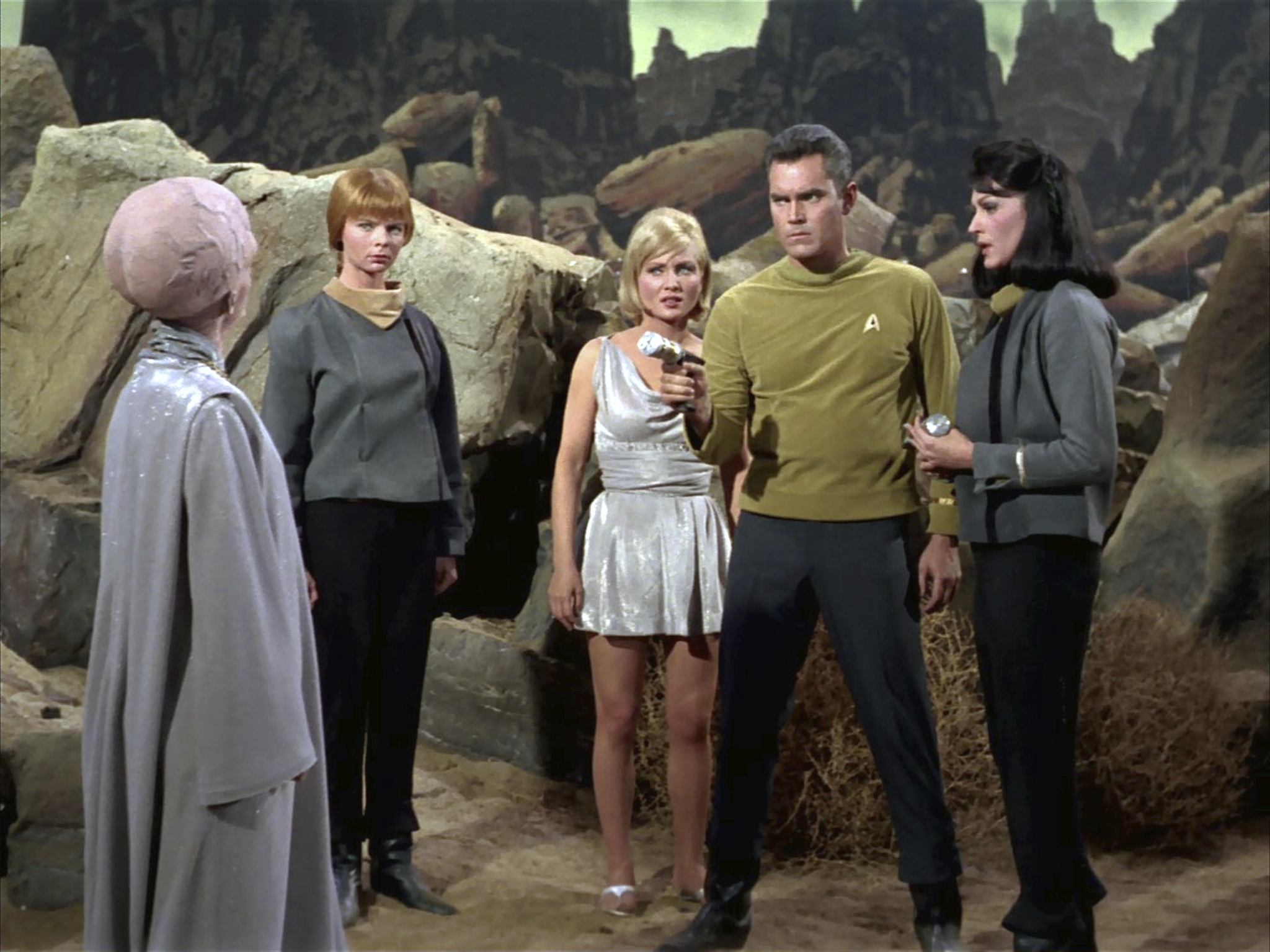 However, Gamzon preferred avoiding VFX for the way the Talosians appear and disappear with their mind tricks. “Having them come in and out like TOS was not a good idea,” the editor said. “We came up with this idea where they sort of fade in and out by [playing with the focus]. And the other thing that was cool was when Vina reveals her true face. There’s not even a dissolve there. She looks up and she’s been changed in the cutting, not through visual effects. It’s very old-school.”

This Article is related to: Awards and tagged Emmys, If Memory Serves, Star Trek Discovery, Top of the Line