The rising actor received a huge standing ovation after "Rocketman" debuted at the Cannes Film Festival. 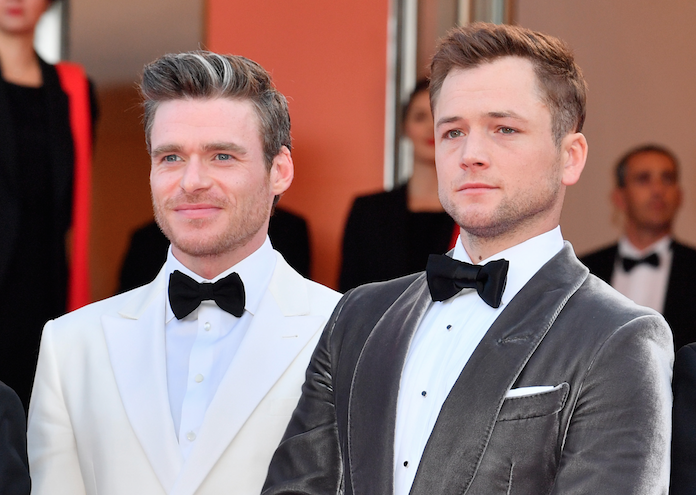 Fresh off a buzzy world premiere at the Cannes Film Festival, Taron Egerton joined his “Rocketman” director Dexter Fletcher and co-stars for a Friday morning press conference in which reporters couldn’t resist asking about one of the most viral moments of the festival so far. After the premiere screening of “Rocketman” wrapped on Thursday evening, Egerton was spotted in the audience crying as viewers rose from their chairs to give the actor a massive standing ovation. Videos of Egerton crying began circulating around the internet with millions of views collectively.

“Alright, alright. Let’s stop talking about it,” Egerton said with a laugh when asked about his tearful reaction. “I got a bit emotional. It was one of the best days of my life.”

Egerton continued, “We have worked really hard to try and make something that we are all really proud of. It’s not your typical biopic. We don’t deal with the songs in a chronological order. There are elements of fantasy. We take some license with the truth, people did not float off the ground at The Troubadour. The response has been so wonderful. For me, personally, thank you so much to everyone that said nice things. You’ve made a young man from Aberystwyth incredibly happy. You’ve made a 72-year-old rock star even more happy. So thank you very much.”

Fletcher was equally emotionally, adding, “It was emotional to sit there with Bernie Taupin and Elton and David Furnish, his husband, and have that moment where they get to watch the film together and, as the filmmaker, to watch it with them.”

“I was quite overwhelmed and thrilled,” co-star Richard Madden said. “It was one electric evening a lot of people worked hard for number of years. It was great.”

Reactions to Egerton’s performance have been strong, with many saying he’s been launched into this year’s awards race and is an easy contender for at least a Golden Globe nomination because the movie is an actual musical and won’t compete in the drama categories. Egerton did all his own singing in the film, in which he plays Elton John across several years. The movie has already gained attention for taking an R-rated approach to John’s life story, which includes frank depictions of drug use and gay sex.

Paramount Pictures will release “Rocketman” in theaters nationwide May 31. Watch the viral video of Egerton crying below.

Taron Egerton reveals why he wept at the #Rocketman world premiere during the #CannesFilmFestival https://t.co/kRBjtL8rTR pic.twitter.com/WtJnTWHEnA

Taron Egerton is crying at the end of #Rocketman. #Cannes2019 pic.twitter.com/JdMeuFlZWB

This Article is related to: Film and tagged Cannes, Rocketman, Taron Egerton