Hamilton returns to the franchise that made her an action movie icon. 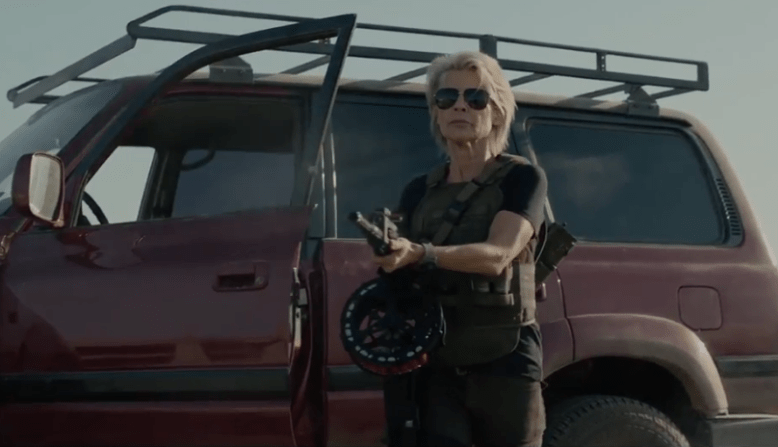 Linda Hamilton returns to her ass-kicking action roots in the first trailer for Paramount’s fall tentpole “Terminator: Dark Fate.” Hamilton became an icon of the genre after playing Sarah Connor in James Cameron’s beloved “The Terminator” and “T2: Judgment Day.” The actress skipped out on the poorly reviewed sequels, but fortunately “Dark Fate” is retconning the “Terminator” franchise by serving as a director sequel to “Judgment Day.”

“Terminator: Dark Fate” stars Hamilton opposite franchise newcomers Mackenzie Davis, Natalia Reyes, Gabriel Luna, and Diego Boneta. Despite fresh blood, the film’s biggest selling point is the reunion between original “Terminator” stars Arnold Schwarzenegger and Hamilton. The franchise’s creator James Cameron is also back in a producing role, although he was heavily involved with the film’s making and story idea. “Deadpool” filmmaker Tim Miller is serving as director.

Hamilton appeared at CinemaCon last month to promote “Dark Fate” and was incredibly candid when asked why she skipped out on all the “Terminator” sequels after “Judgment Day.”

“They’re very forgettable, aren’t they?” Hamilton said. “You start something and you’re invested in the franchise, but somehow the characters that you care about weren’t there. Too many people, too many story points. So I think we’ve done a good job of narrowing down the focus again so it will echo the first two films.”

The “Terminator” franchise last graced the big screen in summer 2015 with “Terminator Genisys,” starring “Game of Thrones” favorite Emilia Clarke as Sarah Connor. The Alan Taylor-directed entry bombed at the box office and earned some of the franchise’s worst reviews. Cameron decided it was time to go back to basics if the franchise was to continue, and thus he got Hamilton to return in a direct sequel to “Judgment Day.”

Paramount Pictures will release “Terminator: Dark Fate” in theaters nationwide November 1. Watch the first official trailer in the video below.