The former “Once Upon a Time” actress spoke to IndieWire about playing a happy housewife who goes through hell. 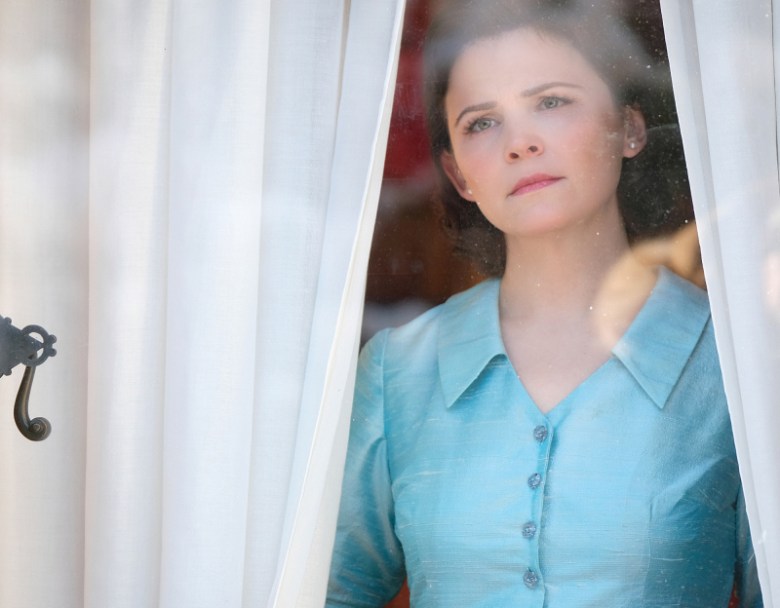 Ginnifer Goodwin played Snow White for eight years on ABC’s “Once Upon a Time,” but she leaves that fairy-tale land far, far behind to enter the nightmarish “Twilight Zone” on CBS All Access. In the episode “Point of Origin,” she plays Eve Martin, who leads a picture-perfect life as a housewife, mother, and benevolent employer who must question her ideas of what it means to belong in a society.

“On the surface, Eve is a privileged white woman who has grown up, to the best of her memory, very safely in the best version of America … in ‘The Twilight Zone’ world,” said Goodwin in an interview with IndieWire. “I would say that she pats herself on the back a little too often for the ways in which she finds herself to be generous. She considers herself very well-rounded, prepared, and protective, like a mama bear, and lives for that role as homemaker.”

Eve is the epitome of well-meaning and even allows her nanny/housekeeper Ana Fuentes (Zabryna Guevara) to use the Martins’ address to sign her grandson up for a coveted private school. But when Ana is whisked away by official men in suits, Eve is left wringing her hands — but not doing much else. “The first time I read it, I remember being made sick by the script,” confessed Goodwin. “It truly gave me a terrible feeling in the pit of my stomach and I’m sure that is because there are truths to it. I think of myself in the same way my character sees herself. I consider myself to be very open and progressive, and I don’t have preconceived notions about people based on demographics.”

Eve has a rude awakening, however, when she’s pulled into a facility where she’s given an orange jumpsuit, strapped into a giant metal wheel, tortured, and interrogated. It appears that they believe she is a person who fled from a parallel dimension that has undergone some sort of horrifying apocalypse.

The parallels to America’s debate over refugees and undocumented immigrants is clear here. In the detaining facility, Eve meets Ana, who finally speaks her mind about Eve’s condescension and hypocrisy. Sure, the Martins consider her “family” but never bothered to learn her own kids’ names. And never mind trying to help her when she was detained. “I mean, America is the great melting pot… or is it?” said Goodwin. “We were founded by immigrants and yet those of us who are privileged and white often freeze anyone not like us out. There’s nothing ‘free’ about the situation. And I think that recent political events has brought out our ugliest weaknesses and flaws.

“The situation is so extreme and so devastating, and the things that were being talked about in the news while we were shooting this were very in keeping with our theme,” she added. “I was just knocked over by these thoughts. This episode is very much about how the people who are trying to escape much worse places should be given the welcome wagon coming in.”

Although Eve has no recollection of another life, she’s had ongoing nightmares that are apparently memories of that other world. This information is revealed, confirming suspicions of her alien heritage, while she’s strapped into the see-saw-like gurney. For Goodwin, being restrained wasn’t uncomfortable and even contributed to her performance, especially since the crew squeezed hot water bottles against her to keep her warm on the chilly Vancouver set. Instead, the biggest challenge was the extreme and extended close-ups.

“Never in my career [had I] worked consistently with a camera that close to my face,” she said. “During a lot of the shots I was looking slightly off to the side so that the audience didn’t feel that I was looking in their eyes. The camera was maybe a handful of inches from my face. And so I had to not fog it up and not spit on it. When you’re in a close-up you can just think something and it’s going to read on camera.”

Playing a character who becomes marginalized and is a wanted refugee is different from any role that Goodwin has been offered before. Her stint on “Once Upon a Time” ended in 2018, and she’s also voiced the animated rabbit Judy Hopps in “Zootopia.”

“I don’t feel like there was anything out there in my work that showed that I was capable of the handling a role like this. I did for a moment consider if they made a mistake and they meant a different Ginnifer. I wanted to be there on set before they realized the error of their ways. I wasn’t going to point it out for them. But I was overwhelmed; this was an inspiring, exciting challenge.”

This Article is related to: Television and tagged CBS All Access, Ginnifer Goodwin, The Twilight Zone, TV Interviews