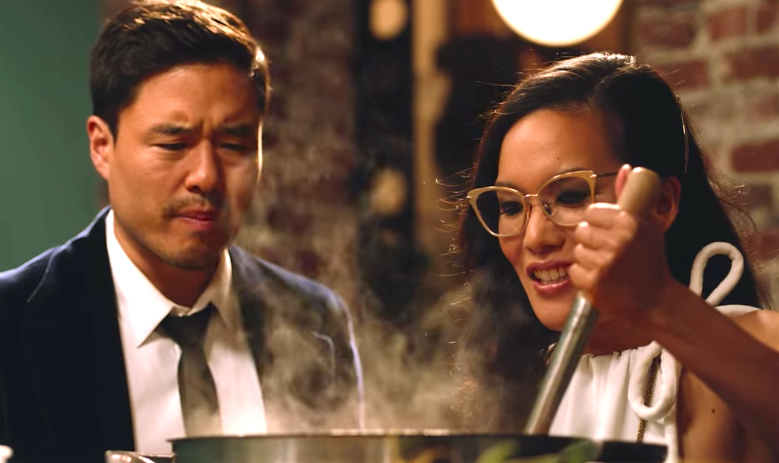 Randall Park and Ali Wong, “Always Be My Maybe”

[Editor’s Note: The following contains spoilers from “Always Be My Maybe.”]

Ali Wong’s obsession with food is unfeigned in the Netflix rom-com “Always Be My Maybe.” Her Instagram includes photos of her family, her job, and lots and lots of food. And in an interview with IndieWire where she starts discussing couture designer Thai Nguyen dressing her for the red carpet, the conversation somehow switches to Vietnamese food.

“When Thai first came over to my house to drop off the dress, he brought over all this banh from his boyfriend’s mom’s shop,” said Wong, who’s Vietnamese on her mother’s side. “It was nem chua that was super sour, super spicy. Pig ears. Cha lua. It was amazing. The whole experience of working with him was so easy and great.”

Clearly the way to Wong’s heart is through her palate, and this is reflected in the love story central to “Always Be My Maybe,” which she co-wrote and stars in with Randall Park. In the movie, she plays celebrity chef Sasha Tran, who specializes in fancy, elevated Asian cuisine in Los Angeles. When she reconnects with her childhood friend Marcus (Park) in San Francisco, sparks fly, but they must navigate each other’s life choices before becoming a couple. This includes Sasha’s approach to cooking and how it reflects her feelings about identity and love.

In a scene early in their reunion, Marcus overhears Sasha on the phone discussing her new restaurant in San Francisco and claims she’s using her “phone voice.” The message is clear; she’s being fake by code-switching her intonation and language.

This theme returns later in the film. During an argument with Sasha, Marcus takes issue with the term “celebrity chef” and then adds, “You know what term I also hate? ‘Elevated Asian cuisine.’ Asian food isn’t supposed to be elevated. It’s supposed to be authentic. That’s what you used to make with my mom.

“I don’t know why you’re doing this kind of stuff now,” he continues. “It’s not authentic. Asian food shouldn’t be served in a shot glass. It should be served in a big-ass bowl. You’re just catering to rich white people.”

In short, he’s accusing her of a culinary code-switching. She’s still cooking Asian food, even her native style of cuisine, but her approach conforms to high society standards for elaborate, fussy, and illogical presentation in his eyes. He wants his food simple, tasty, and filling. All the rest is just code-switching noise. Randall Park, “Always Be My Maybe”

In the end, Sasha and Marcus become a couple, as the rom-com gods dictate. But because the food journey must also follow suit, Sasha’s approach to cuisine also returns to what made her happy in childhood. In the film’s penultimate scene, she reveals the restaurant concept for her New York eatery: homey Korean dishes from Marcus’ late mother’s recipes. The featured dish is a big, bubbling vat of fiery red kimchi jigae, which of course is served in a big-ass bowl.

Wong said, “[Director Nahnatchka Khan] has said that food is memories. And for her character, it’s a way that Sasha connects to Marcus, his mom, and their family because they fed her. It just made sense story-wise for her to end up cooking that kind of food because that’s what she mostly grew up with.”

This isn’t a terribly new storytelling concept. Home may be where the heart is, but it’s also where the stomach has been raised. That’s why childhood sense memories often determine what one considers comfort food. It’s why the snooty food critic in “Ratatouille” is so moved by Remy’s spin on the classic French vegetable dish.

What is new, however, is how “Always Be My Maybe” presents so many traditional Asian foods as everyday American fare without explanation. More importantly, it’s presented as desirable and delicious — not Othered as stinky, gross, weird, or inferior. Many Asian-Americans have experienced food-shaming one way or another, and that’s often amplified in the media, such as how “Gilmore Girls” mocks Indian food’s pungent scent. Even “Fresh Off the Boat” addresses this issue in its pilot episode when young Eddie (Hudson Yang) is shunned for bringing noodles to school. 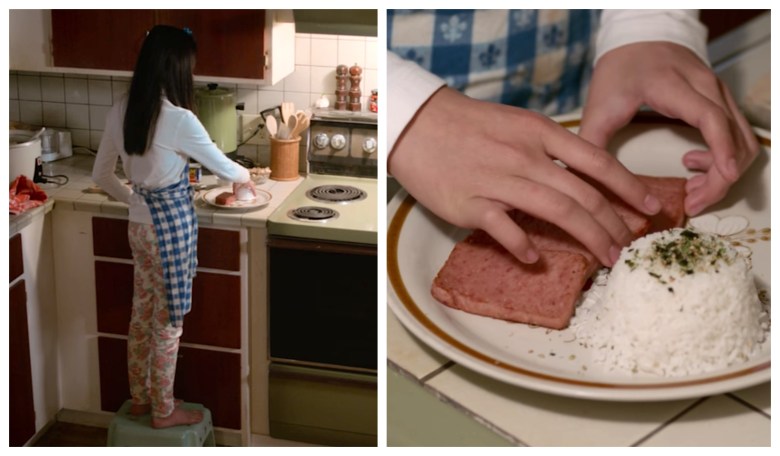 But “Always Be My Maybe” flips the narrative. When young Sasha is introduced to kimchi jigae, she says it smells amazing. When young Marcus complains about bringing leftovers to school, it’s not from the shame of his mother’s cuisine, rather not wanting to be the kid drinking soup from a thermos. That’s just not cool no matter what the soup is.

Even young Sasha’s juvenile cooking choices are unapologetically Asian. After coming home from school, she fixes herself fried slices of Spam fanned out on a plate and rice molded into a dome, garnished with homemade furikake. It’s a deconstructed Spam musubi. She makes it with care, and it looks delicious.

“The scene says young Sasha makes herself dinner, so what would that actually be?” said Khan. “We didn’t want it to just be what a white kid would probably make, like mac and cheese or PB and J; that’s not authentic to this character.”

Before settling on spam and rice, Wong reveals that they did consider another Asian easy food staple. “There’s Top Ramen, obviously, where you zhuzh up the Top Ramen, but then it was like, ‘What brand of Top Ramen do we use?’” she said. 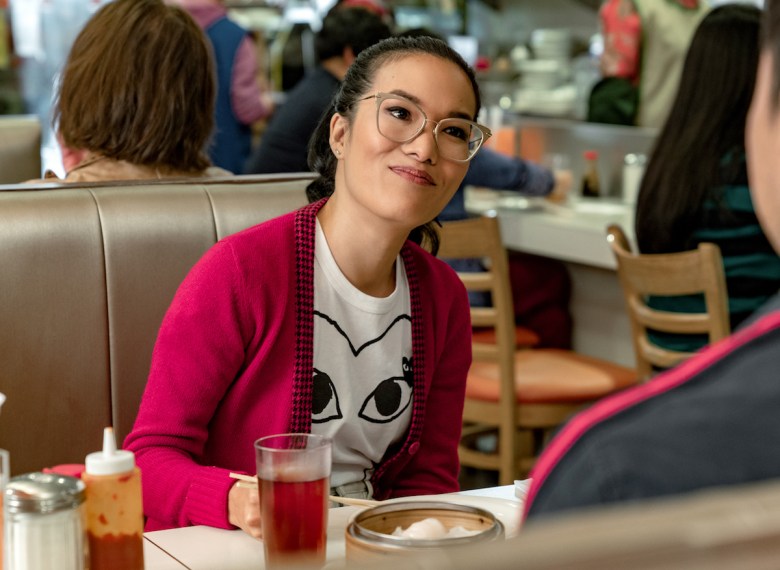 Ali Wong, “Always Be My Maybe”

During another key food scene, adult Marcus has reintroduced Sasha to his favorite dim sum spot that he frequents at least twice a week in the Richmond area. They chow down on har gow, shu mai, and chicken feet, and Sasha points out a common complaint that Americans have about these mom and pop Asian establishments: The proprietors and wait staff are rude, but the food is delicious.

The movie chalks up the rudeness to the waitstaff speaking only Cantonese, which neither the Vietnamese Sasha nor the Korean Marcus spoke growing up. This points to just one duality of the Asian-American experience of falling under the same identification umbrella and yet not existing as one cultural monolith. As a surprise, Marcus reveals that he’s learned just enough Cantonese since childhood in order to get better service. He’s literally code-switched to speak the waitstaff’s language.

One of the pinnacles of “Always Be My Maybe” is the first scene with Keanu Reeves playing an exaggerated jerk version of himself as a love interest for Sasha. He’s just met Marcus and his then-girlfriend Jenny (the hilarious Vivian Bang) for a double date at the ultra-modern and pretentious restaurant Maximal.

The dishes range from smears of pureed flavor that represent Caesar salad to an all-black monochrome course of black pasta and black quenelles on a black plate. The most outrageous dish, however, is one that is presented after Keanu expresses his wish to eat something that plays with the concept of time. The answer is a venison dish that comes with “headphones so you can hear the sounds of the exact animal you are about to consume, illustrating nature’s life to death cycle.” Whoa.

Wong brought on her friend Chef Niki Nakayama, who inspired her as the only woman featured on the first season of Netflix’s “Chef’s Table,” to design all the food at Sasha’s upscale restaurants and the outlandish Maximal kaiseki-inspired dinner. (On Monday, Nakayama’s Los Angeles restaurant, n/naka, was awarded two Michelin stars.) Although the concept of kaiseki is a traditional Japanese multi-course meal – featuring seasonal ingredients and presented in a deliberate progression of preparations – the Maximal dinner is kaiseki that’s lost its way. Yes, the ingredients are highlighted, but it’s less about the optimal, most flavorful way to serve them and more about the coolest (or creepiest) way to serve them. 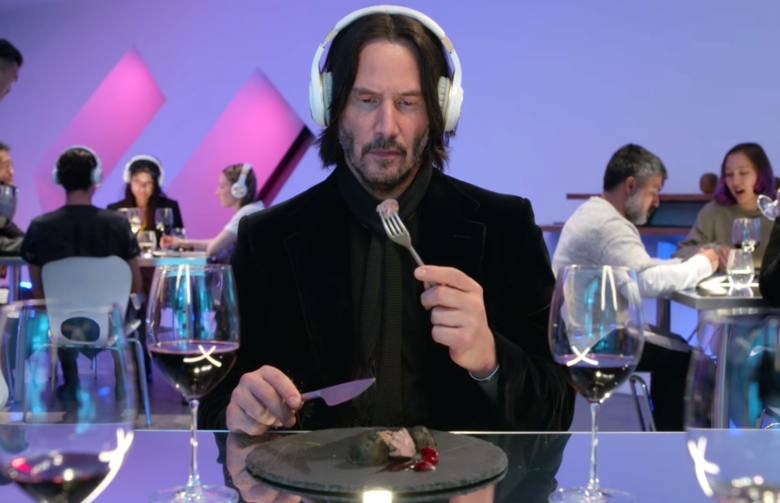 Keanu Reeves, “Always Be My Maybe”

“I’m so proud of her in that scene. The monochrome plate, the headphones — that was all Niki’s idea. That’s her showing how funny she is, via food,” said Wong. “That’s what I’m saying via expression. To me, food is always a great way to talk about expression, your point of view, and discovering who you are and your voice.

“When you meet Niki, she’s not like this raucous-ass person who’s standing up on the table, flashing everyone, and cracking jokes. But she’s a very funny person, and you can see that through her food. That’s her. That’s her also roasting other people, you know?”

“Always Be My Maybe” isn’t necessarily against celebrity chef culture or elevated dining, but for the purposes of the story, Sasha has code-switched back to her first loves. Wong sees it all as a piece. Food is self-expression, art, and even — in the case of the Maximal dinner — theater. Purity of form doesn’t matter, but voice does, and that can change over time.

”Always Be My Maybe” is currently streaming on Netflix.

This Article is related to: Film and tagged Ali Wong, Always Be My Maybe, Netflix, TV Interivews