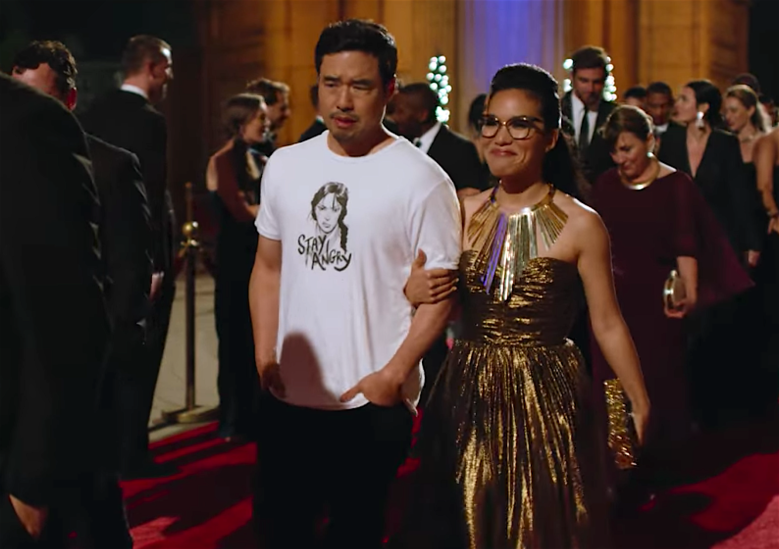 Randall Park and Ali Wong, “Always Be My Maybe”

[Update: Although the original t-shirt stock sold out, more are being ordered. Fans can order a Stay Angry t-shirt on pre-sale now.]

In a key scene from Netflix’s rom-com “Alway Be My Maybe,” celebrity chef Sasha Tran (Ali Wong) and her old childhood friend Marcus (Randall Park) attend a fundraising event that involves fancy passed apps and a red carpet. As they approach the door, Marcus can be seen wearing a white T-shirt with a snarling woman’s face on it. The shirt reads, “Stay Angry.”

The shirt and the catchphrase are from Angry Asian Man, whose alter ego is blogger Phil Yu. Since 2001, the Angry Asian Man blog has examined the Asian-American experience including news, media, representation, and politics. The site has been a galvanizing force for Asian pride and awareness in the community. Park is not only a fan of the site, but he’s also friends with Yu and has contributed to the cause; the annual subscriber fundraiser rewards donors with a custom-designed T-shirt that reads “Stay Angry” to remind readers to not settle for the status quo.

“Marcus and myself are people who are tied to the community, and he is someone who probably donated $20 to Phil, you know?” said Park about the shirt’s inclusion in the scene.

“And [he] wrote a guest post once,” added Wong.

“Yeah, he wrote a guest post once, because he respects that, as do I,” said Park.

So far, there have been four official Angry Asian Man t-shirts, each featuring a design by an Asian artist: Derek Kirk Kim, Irene Koh, Ethan Young, and Jeremy Arambulo. Park had contacted Yu to ask permission to wear a shirt in the movie, so Yu dropped off the four options. 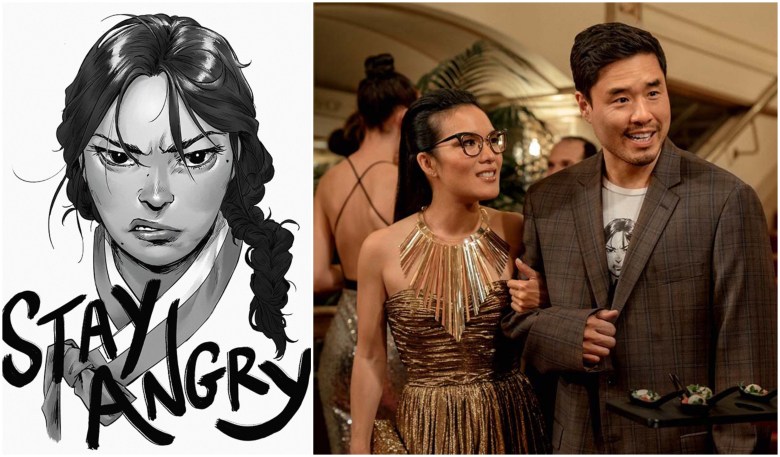 The shirt from the red carpet scene is Koh’s design. “Koh came up with the woman’s face, and it’s cool because she’s also wearing a Korean hanbok,” he said. “I think out of all the years, that’s probably the most popular design. Everyone still asks about that shirt.”

It wasn’t until Yu attended an early screening of the film that he realized just how prominent the placement for the shirt would be. When Marcus reaches the event’s entrance, the management doesn’t deem the shirt appropriate attire and forces him to wear an oversized blazer on top.

“I just thought that his character was going to be wearing it in some random scene. But then when it gets some screen time, it was actually was part of the a joke,” said Yu. “I guess the character is a fan of Angry Asian Man. The whole movie to me seems like it really comes pretty organically from the Asian-American community. It’s the movie that two Asian-American Studies folks make without being overly didactic about it. It feels homegrown: Yeah, sure, his character would be wearing an Angry Asian shirt.”

Marcus must donate every year because another Stay Angry T-shirt — Ethan Young’s design with the kaiju that looks like Godzilla — can also be glimpsed briefly in a scene.

As evidenced by Angry Asian Man’s entire ethos, anger is the key to Asian pride. Not only is it a rallying cry to not settle for being marginalized or prejudiced against, but it’s also in direct opposition to the meek and subservient Asian stereotype. The “Stay Angry” motto actually originated from one of the shirt’s designers. Yu had supported one of Derek Kirk Kim’s crowd-funding projects, and as a reward, he received a custom-made piece of art that included the words “Stay Angry” on it. When Yu decided to do his own fundraiser with T-shirts, he latched onto that phrase.

“’Stay Angry’ is perfect because it’s a more generic message than Angry Asian Man,” said Yu. “Anybody can wear a shirt that says Stay Angry. Men and women, whether you’re Asian or not, that’s a pretty good sentiment: Stay vigilant, keep conscious, don’t give up the fight.”

Koh’s original T-shirt design is no longer in stock. Less than 400 were ordered for that year, and had all been sent out – athough Yu is mulling over possibly reordering more if there’s demand. For now, he’s just thrilled about Park and Wong’s achievement with “Always Be My Maybe.”

“I’ve known him for a dozen years, I think. I’ve always been a fan of his work and seeing his career grow and just from being in the community, it was just a matter of time before he finally got the work that he really, really deserved,” said Yu. “This is definitely it. That’s why I felt like the movie premiere felt special. He wrote this, starred in it. This is wholly his vision and Ali’s as well.”

”Always Be My Maybe” is currently available to stream on Netflix.

This Article is related to: Film and tagged Always Be My Maybe, Netflix, Phil Yu, Randall Park