Paul Thomas Anderson and Thom Yorke re-team for a stunningly beautiful Netflix one-reeler that tunnels out from the bottom of a nightmare. 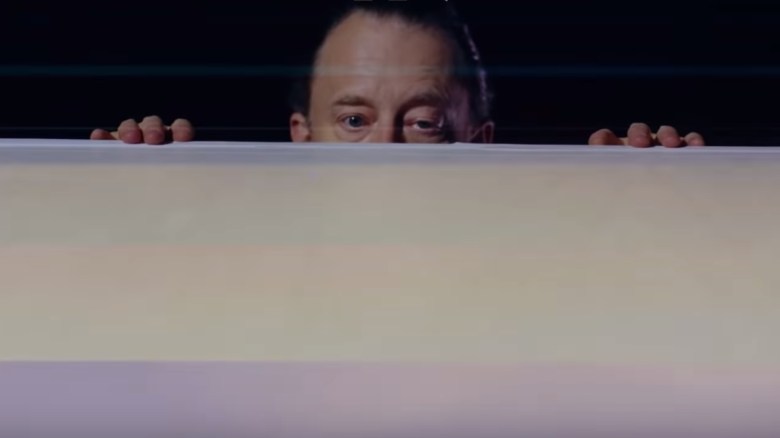 “ANIMA,” the rapturous and spellbinding Paul Thomas Anderson “one-reeler” that Radiohead frontman Thom Yorke (and Netflix) have commissioned to help promote his new album of the same name, feels as essential as anything the “Phantom Thread” director has ever done. At least on first blush. It’s also, in its own beguiling way, the next logical step in what has become one of recent history’s most rewarding partnerships between a filmmaker and a group of musicians. This 15-minute short is nothing less than a dream come true.

Yorke — now four LPs deep into a twitchy and feral solo career that includes the score for Luca Guadagnino’s recent “Suspiria” remake — has long alternated between raging against the madness of the modern world, and surrendering to it in some kind of narcotic stupor. One song offers a snarling “fuck you” to the drone-like middle managers who turn their corporate offices into dystopian fiefdoms (that would be the chorus of “Karma Police” insisting “this is what you get/when you mess with us”), while the next is a spoken-word list of all the ways that society has numbed itself into a somnambulent daze: “Fitter, happier… Regular exercise at the gym… A safer car… Sleeping well (no bad dreams).”

For as often as Yorke is (mis)characterized as the poster boy for digital paranoia, the most common motif in his songs isn’t fear so much as it’s the tension between freaking out and falling asleep. More often than not, that tension is expressed with a sarcastic edge that makes it hard to rest easy. From the title of “(Nice Dream)” to “Standing in the shadows/At the end of my bed” on “Kid A” to the way Yorke sneeringly interrogates Iraq War-era politicians on “2+2=5” (“Are you such a dreamer/to put the world to rights?”) and then bleats “I’m gonna go to sleep/And let this wash all over me” four tracks later, Radiohead’s first six records can be heard as an uneasy wake-up call from a self-protective slumber — a futile attempt to wish away the nightmare. “I’m not here. This isn’t happening.”

But things grew confusing after that, as the future that Yorke had been fretting over finally arrived and the line between sleep and waking life started to blur. That’s when Radiohead, whose music videos have a reputation for being as restless and brilliant as the songs that inspired them, commissioned Paul Thomas Anderson to help them see the second proper single off 2016’s “A Moon Shaped Pool.”

The “Phantom Thread” director’s gorgeous six-and-a-half-minute video for “Daydreaming” didn’t try to sort things out so much as it disintegrated the last vestiges of linear thought, the clip following Yorke as he quizzically walks through doors that separate a series of disconnected spaces (a pharmacy opens into a house opens into a beach) and end up leading to a cave atop a snowy mountain. At the time, it was the most palpable visualization of the harrowing unreality — and latent sense of hope — that’s baked into the grey matter of Yorke’s songwriting. As of now that past is all just prelude.

“ANIMA” begins on a subway train in Prague. All of the commuters on board — dressed in colorless uniforms — are (naturally) asleep in their seats; all of them except for Yorke, who’s just starting to nod off. That’s when Yorke catches a glimpse of a beautiful fellow passenger (Italian actress Dajana Roncione, the musician’s real-life partner) and Damien Jalet’s spectacular, Pina Bausch-like choreography pierces through the drudgery. Suddenly we’re launched into a sedentary dream ballet that turns the ride to work into an anguished dance of the automatons. Yorke, fans won’t be surprised to see, is more than able to keep up with all the professional dancers around him; the guy low-key knows how to move his body with the best of them.

Less expected, but perhaps even more impressive, is that Yorke is also a natural actor with a silent film star’s grasp of movement and comic timing. There’s something vaguely Tramp-like in the way that our nameless hero swoops in to rescue an abandoned briefcase and return it to its rightful owner — Yorke’s writing is routinely preoccupied with the idea of retrieving lost items and returning to past moments in order to set things right — only to be flummoxed by the turnstile that gives him (and only him) such a hard time of passing through. In the background, a subway advert asks: “What happened to your dreams?” 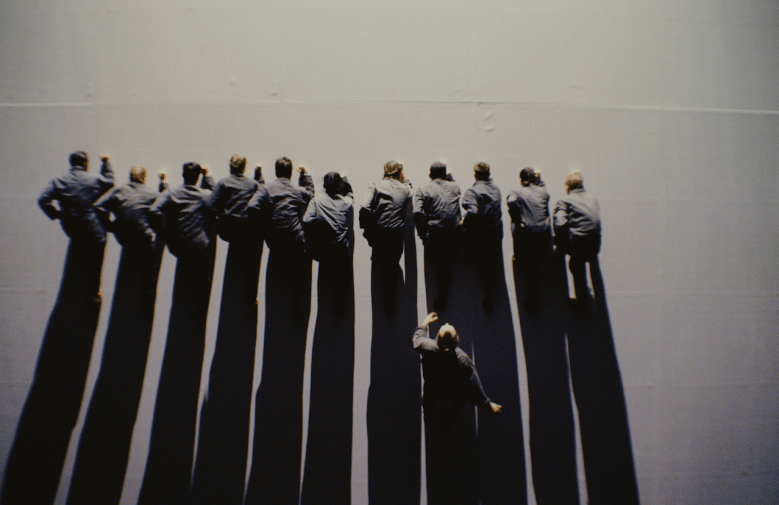 Yorke has been even more preoccupied with dreams than ever these days, admitting to a Carl Jung-inspired obsession that has led him to think of sleep as less of a coward’s respite than a necessary way of processing the insanity around us; of reconciling the various parts of our reality in a world that’s dislocated action from identity and turned us all into veritable insomniacs. As “Not the News” bleeds into “Traffic,” Yorke slips further away from a literal place (Tarik Barri’s wild projection art helps ease the trip down the rabbit hole), our hero eventually winding up on a tilting gray slab that keeps trying to make him lose his balance.

It’s hard to overstate how flat-out cool this part looks, even before the ground starts tilting and everything goes haywire in an industrial, violent dance that feels equally indebted to the Madonna choreographer Vincent Paterson and “Crouching Tiger, Hidden Dragon” combat maestro Yuen Woo-ping. Back in his “Magnolia” days, Anderson may have shot this all crazy-like with a series of rattling Steadicam shots and a focus on the camera’s movement, but now, in a more probing and sedate part of his career, he has the good sense to capture the action in steady wide takes that remind you how exciting it is when anything ruptures the default stillness in “Phantom Thread” or “The Master.” You never lose your bearings, even as you can see Yorke submit himself to the confusion of it all and sing about beef foie gras as yesterday’s headlines are blown through the wind.

And then, as the busyness of “Traffic” bleeds into the gauzy synth glow of “Dawn Chorus,” “ANIMA” arrives at its most beautiful section and the closest thing it has to a narrative “point.” The third part of the one-reeler finds Yorke and Roncione reconciling in the dark alleys of France’s Les Baux-de-provence and spinning faster and faster around each other as the sun comes up and the soundtrack winds through a fine new collection of Yorke’s fractured poetry (“If you must you must/if you could do it all again/come on chop-chop/I think I missed something/but I’m not sure what”). 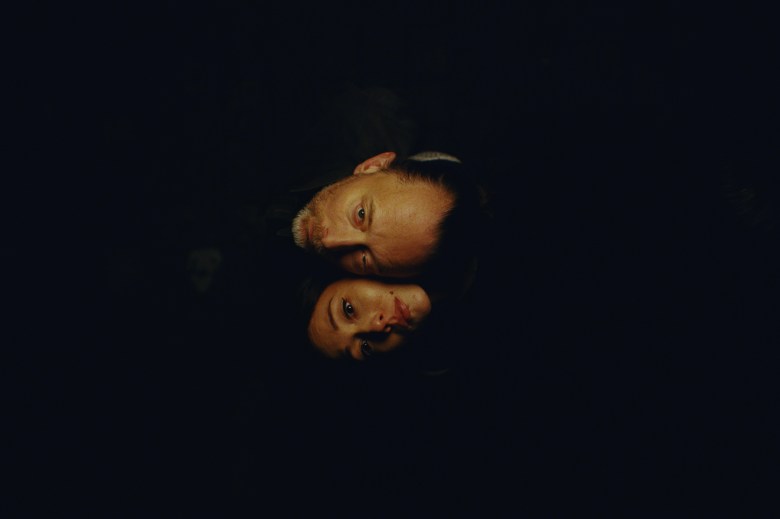 And just like that, as these two lost souls find each other — or, to go with a Jungian interpretation, the male and female parts of the same psyche are joined together — this becomes the purest expression of romance that Yorke has ever resigned himself to on record. There’s no sarcasm or sinister irony, no sense that “All I Need” might be too much or that true love will only wait itself to death; it’s as euphoric and unsustainable as the “Inherent Vice” flashback where Doc Sportello and Shasta Fay Hepworth make out in the rain. Yorke and Roncione clasp hands and twirl around each other like happy marionettes who never want to move on their own again. It’s soft and beautiful and forcefully stirring in a way that Radiohead (or Radiohead-adjacent) video projects seldom are.

As the sun comes up and the characters are spirited back to Prague, Darius Khondji’s supple cinematography (shot on 35mm film with VistaVision cameras) is tactile and sincere enough for us to believe in the emotional truth of what we’re seeing. After a lifetime of conflating dreams with denial, Yorke has found something beautiful in his sleep — something that he’ll want to remember when he finally wakes up. In “ANIMA,” sleep isn’t surrender, but rather a chance to put everything in its right place.

The most perfect visualization to date of Yorke’s music, “ANIMA” finds a way to tunnel out and escape from the oppressiveness that people tend to associate with the slippery rock star. Anderson’s film only wears a veil of dystopian uniformity so that it can fling it off and touch the tender spots underneath; so that it can find something and lose it and find it again. If “ANIMA” is a sublimely visceral encapsulation of what it feels like to listen to Radiohead (or its frontman), that’s because it feels like the kind of dream that follows you out of bed — the kind of dream that makes the mad world around you seem real enough to touch.

“Anima” will play in select IMAX theaters on June 26. It will be available to stream on Netflix on June 27.