Companies have been selling virtual reality as the next big thing in technology for several years. At some point, they need to begin delivering on those promises. 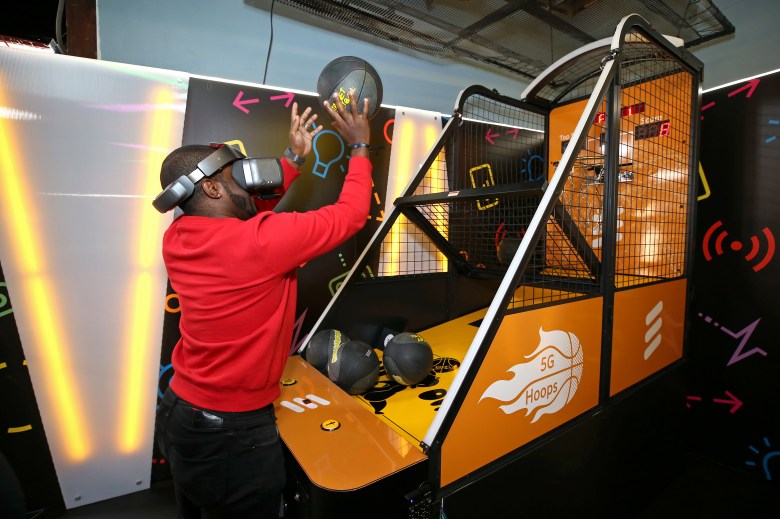 Virtual reality has been hyped as the next big thing in entertainment for years, but consumers haven’t been quite as eager as companies to invest in the technology.

Businesses continue spend billions of dollars on virtual reality hardware and programs and see it as an industry game changer, which is why virtual reality and other high-tech immersive experiences were a major draw at the fourth annual AT&T Shape, a tech and entertainment expo that was held at Warner Bros. Studios over the weekend. The event hosted a variety of virtual reality films, television shows, video games, and other high-tech experiences, and several of the exhibitions showed that the technology genuinely has the potential to drive the entertainment industry forward.

That said, virtual reality has been a source of significant skepticism for years, and demonstrations of the technology at AT&T Shape showed that mainstream consumers should continue waiting for virtual reality to be further refined before investing in the various virtual reality tech on the market.

One exhibitor, the Emmy-winning Felix & Paul Studios, which creates virtual reality films and television shows, collaborated with NASA to produce a brief virtual reality tour of astronauts working and living in space. An immersive look at astronauts floating around a space station, plus the novelty of being able to physically turn around and see the full 360-degree scale and scope of the environment, was plenty interesting, but the experience was significantly dulled by the middling image quality and the persistent discomfort of the virtual reality headset.

Also present at AT&T Shape was Wipro, a large Indian conglomerate, which presented a demo for virtual reality sports shows that served as the event’s best example of virtual reality’s consumer potential. To use basketball games as an example, the finished product would allow users to view an NBA game from multiple perspectives, such as courtside seats, under the hoop, and even from the perspective of multiple players, according to a Wipro representative.

There’s no denying that that sounds incredible, and is one of the most obvious examples of how virtual reality could create a cinematic experience genuinely unlike anything else available. But this was also a tightly-controlled tech demo for a product that is a long way off from being completed. Wouldn’t sports organizations and stadiums have to agree to accommodate this kind of technology at every one of their games? Wouldn’t watching the game from a player’s perspective require players to agree to wearing some sort of performance capturing device?

Questions upon questions, but still, the potential is palpable. 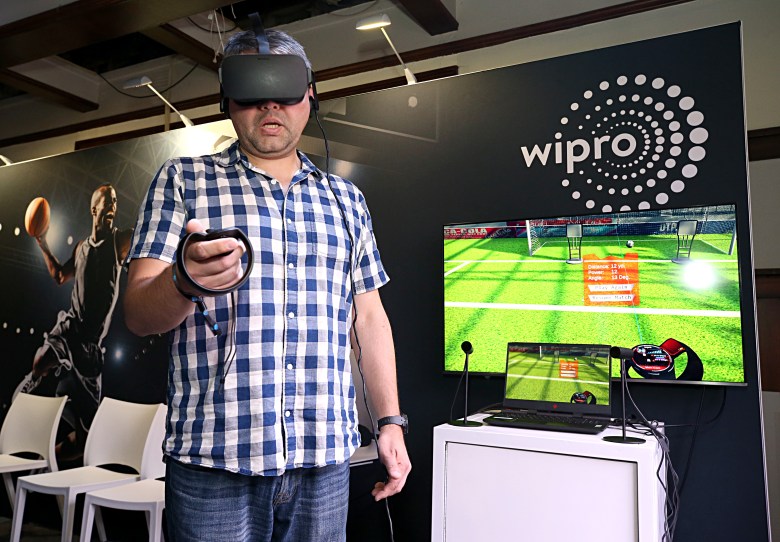 Danny Keens, NextVR’s head of content, spoke at one of the event’s panels about the future of virtual reality entertainment and later told IndieWire that his company offers virtual reality sports programs, concerts and other shows through its free app, which is available on all major virtual reality devices.

Of course, the renewed interest in virtual reality is still a relatively recent phenomenon. The technology promises next-gen, transformative entertainment experiences, and it’s probably unfair to expect a television or gaming experience as realistic as the simulated worlds of “Ready Player One” or “The Matrix” to hit the market overnight.

After all, it took time to go from buying rotary phones to buying iPhones. That said, companies have been selling virtual reality as the next big thing in technology for several years. At some point, they need to begin delivering on those promises.

While virtual reality probably won’t be taking the consumer film and television markets by storm anytime soon, the technology is beginning to see more mainstream use by Hollywood studios. As digitized environments, motion capture and other forms of CGI become increasingly common in film and television shows, some creators are turning to virtual reality to aid in the production of their works.

Take the upcoming “The Lion King” remake, for example. The film, if trailers are any indication, anyway, is nothing short of a landmark in photorealistic graphics. A recent Wired feature, which noted that the film was short entirely in virtual reality, did a deep-dive into how filmmakers are beginning to embrace virtual reality to create complex and photorealistic environments. 2016’s “The Jungle Book,” another visually astounding Disney production, was created using similar virtual production techniques.

ARwall, which hosted an exhibit at AT&T Shape, was one of the event’s few presenters that displayed XR tech intended for creators as opposed to the consumer market. The company uses large LED screens to project a virtual environment without using greenscreens. Instead of playing their parts out in front of a greenscreen, actors and actresses work on a mobile set platform, with ARwall’s large screens in the background.

While lighting, reflection, flares and shadows often take significant time to perfect in greenscreen productions, ARwall’s tech, most notably used in Syfy’s “Nightflyers,” claims to streamline many of those processes, which saves studios time, money and manpower, according to ARwall CEO René Amador. “It’s a complete alternative to greenscreen visual effects,” Amador told IndieWire. “We’re eliminating months of postproduction. The entire post-visualization and compositing layers of the process are completely eliminated.”

An ARwall license runs studios around $36,000 a month, Amador said.

Though film and television-focused virtual reality had a significant presence at the event, AT&T Shape also hosted a number of other X Reality, or XR—an umbrella term for the various kinds of tech-created realities—exhibitions.

Unfortunately, no matter the kind of “reality” these exhibits promoted, they were all victim of the same issues that plague most virtual reality devices: The image quality is unacceptably poor and the headsets create physical discomfort that ranges from mildly irritating to just short of agonizing.

Still, that’s not to say that many of these exhibits weren’t interesting. Take Magic Leap, a startup that has raised over $1 billion from investors, for example. Though the company’s head-mounted display looks similar to typical virtual reality headgear, it superimposes 3D images over user’s environment instead of completely replacing their view. In simpler terms, it’s similar to Tony Stark’s numerous holographic screens in the “Iron Man” films.

The idea is that the user can have up to four virtual screens up at a time, each displaying a different television show. For example, a user could be watching a sports broadcast while tracking the weather and news stations. Turning one’s head towards one screen would pause the others. A high-tech multitasking headset, it costs $2,300.

If the price goes down, and if the image quality goes up, and if the bugs—the screens I wasn’t watching sometimes failed to pause—are ironed out, and if the headset doesn’t hurt to wear, this kind of technology certainly has the potential to make a splash in the consumer market. But that’s a lot of ifs.

Though there was a physical set of “Game of Thrones” props, the experience had me pick up a virtual torch and dagger to ward off some of the show’s signature monsters. Some of the effects were impressive—I was able to wave around the torch and dagger with fairly convincing realism—but the hit detection was awful. The immersion is quickly ruined when you’re flailing a dagger at a baddie for 30 seconds like an idiot, only to realize the program isn’t registering the stabs because you’re standing one step away from where you should’ve been.

While the promise of a thrilling battle with “Game of Thrones” monsters was enough to woo attendees—the exhibit’s line was usually well over an hour long—it fell spectacularly short as an incentive to invest in X Reality tech. The event’s “Game of Thrones” experience is not a publicly available product and the device it runs on retails for around $2,300, an AT&T representative said. I might’ve defeated a Wight and a White Walker, but those monsters paled in comparison to the pain I felt from the headset drilling into my forehead. 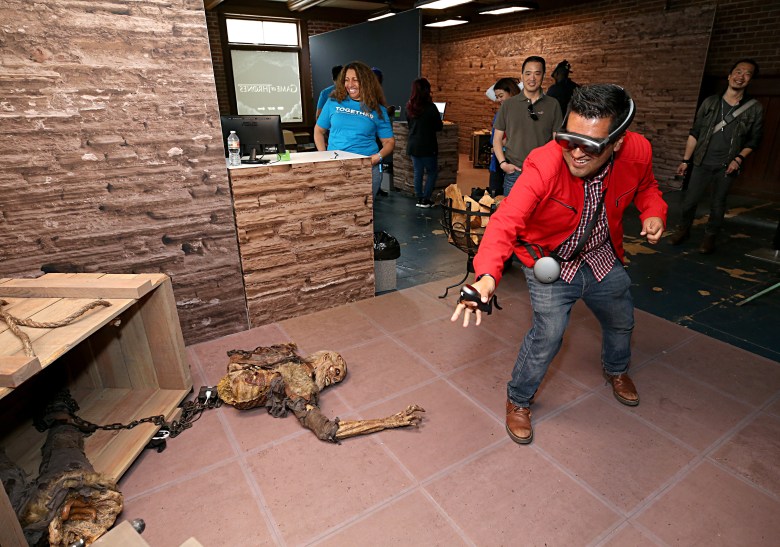 I don’t mean to harp on the physical discomfort, but it’s hard to understate how painful wearing most of these virtual reality headsets was. The aforementioned Wipro demo had plenty of potential, but it legitimately felt like the exhibit’s headset was boring a hole into my skull just moments after putting it on. The adjustable strap did nothing to help and I had to constantly fiddle and adjust the headset to alleviate the pain, which is really a problem since the glasses need to be in a very specific position to display images correctly. For those that suffer from motion sickness, that’s another (potentially insurmountable) hurdle to consider when using virtual reality headsets.

Maybe I’m an outlier. And to be fair, there’s not much time to fine-tune the ergonomics when you’re rushing through a long demo line at a busy event. But seriously, is there a reason none of these cutting edge, expensive devices—at conventions and trade shows, anyway—have something as obvious as a foam cover?

These concerns will probably be ironed out as developers continue to fine-tune their X Reality hardware. Several AT&T Shape exhibitors were eager to note that their content libraries would continue to expand, while future iterations of their hardware would become cheaper and boast superior image quality.

But if that’s the case, why invest in the technology right now? Deep-pocketed early investors and tech enthusiasts might find value in dropping one or two thousand on a cutting-edge X Reality headset, but for the rest of us, it’s hard to justify the price when you could spend the same cash on a solid 4K television or high-end gaming computer. Of course, there are plenty of more affordable virtual reality headsets on the market—the Oculus line of headsets are only several hundred dollars—but many of them still suffer from uncomfortable designs, poor image quality and a weak content library.

That all sounds well and good. But for consumers, it means another year of waiting and seeing if this kind of virtual reality technology finally becomes worth it. In other words, business as usual.

This Article is related to: Television and tagged AT&T, Virtual Reality, Warner Bros.