Three episodes into the second season and it's clear "Big Little Lies" has changed, but where it's going — and what's the point — remains a mystery. 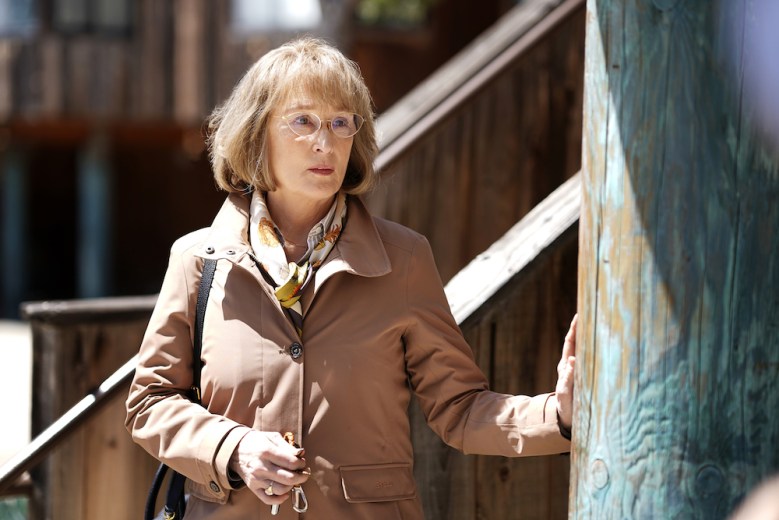 Meryl Streep isn’t just the enticing new cast member to “Big Little Lies” Season 2; she’s carrying the entire plot on her shoulders. So far, that’s been a blessing, as Streep’s attentive and rich performance makes any time spent with the mourning Mary Louise pure pleasure. But in Episode 3, “The End of the World,” it’s also clearer than ever that she’s the only one driving any narrative momentum. What writer David E. Kelley and director Andrea Arnold do with her dogged pursuit of the truth will be the make or break moment for the series. As we approach the midway point, this latest hour shows how enjoyable and affecting this new “Big Little Lies” can be, while still repeating the same beats shown previously.

Before we get to a few theories of what might come next — and what it will mean for the series if its crisis point skews too big or too little —  let’s look at the developments in “The End of the World.” The title comes from a strange source: a therapist dressed like Little Bo Peep. Called in to talk to Renata’s daughter, Amabella (Ivy George), the child expert tells the parents their little girl is anxious. She’s worried about her dad, Gordon (Jeffrey Nordling), going to jail, her mom (Laura Dern) for unknown, instinctual reasons, and also the planet, because her teacher told her about climate change.

The Kleins being who they are choose to focus on her educators, as Renata throws a magnificent temper tantrum in the principal’s office, culminating with, “I will be rich again, I will rise up, I will buy a fucking polar bear for every kid in this school, and then I will squish you.” But, like the rest of Monterey Five, Renata is focusing her anger in the wrong place. Perhaps she knows she’s receded from her family because of the murder she participated in, or maybe she’s just unable to accept any blame for any problem under any circumstances. Either way, it’s fun to watch her blow up (Dern is, as always, extraordinary), but we knew all this before.

The same goes for Madeline (Reese Witherspoon) and Ed (Adam Scott). Following the giant fight to end last week’s episode, it’s good to see them in couple’s counseling, and watching an expert therapist go to work is always a rewarding experience (especially when said therapist is played by Robin Weigert). Dr. Reisman probes Ed’s absence from his own marriage — “Could it be that Madeline is just trying to get your attention?” — as well as Madeline’s need to look elsewhere for satisfaction. “Abigail would be nothing without college, perhaps, because you are?” she asks Madeline, rooting out her self-esteem issues hidden by vehement insults and loud, school assembly shouting. 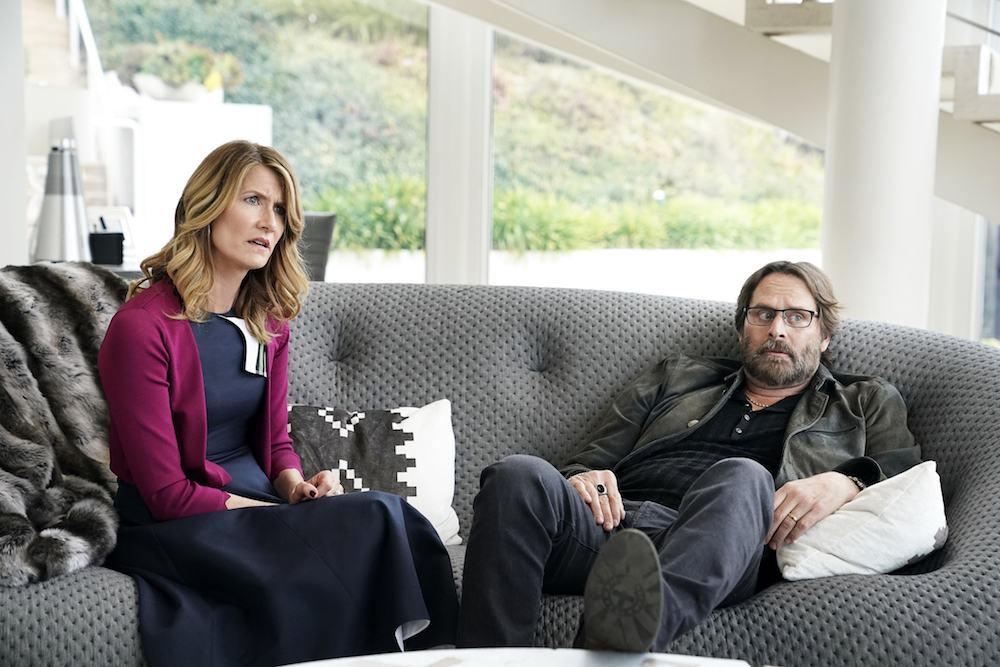 It’s the latter that results in the episode’s climax, a showy moment for Witherspoon as Madeline falls apart in front of the very parents she’s been trying to impress, but for as empathetic as you feel for her in that moment (a rarity for such a brash character), she’s mostly just giving voice to ideas we were already aware of — “You can’t tell [your kids] part of the truth, you have to tell the whole truth!” Well, yeah, no shit. Glad you’re coming around.

Even Celeste (Nicole Kidman) in therapy feels like well-trodden territory. Hearing Dr. Reisman say, “He almost killed you” is powerful because it’s a terrifying and true statement. Hearing her ask Celeste if she’s an addict and Perry is her drug, that too is a strong, lay-it-all-out-there line. But even watching as Celeste can’t stop herself from watching old videos of her abusive husband to close out the episode lacks additive oomph. “The End of the World” rests heavily upon its title’s theme, telling small, personal stories about how parents’ mistakes can’t be masked from their children. Renata can’t really blame everyone else when Amabella calls her out for being off. Madeline can’t treat her husband like a kid, sharing what she wants but only that much. Celeste can’t hold onto what’s good about Perry without inadvertently holding onto the bad, as well.

All these scenes are compelling in their own right, a helpful if not integral part of the series’ emotional arc, but only Streep’s Mary Louise is pushing the plot. So let’s talk about what Mary Louise, a junior detective and the only one still working this particular case, can do with the information she’s collected so far. In Episode 3, she starts strong: Asking Jane (Shailene Woodley) for a paternity test to confirm Perry is Ziggy’s father. When that gets shot down, she takes a more personal route, pleading with Jane to tell her she saw some good in Mary Louise’s son. Jane, the rape victim, obviously does not acquiesce. 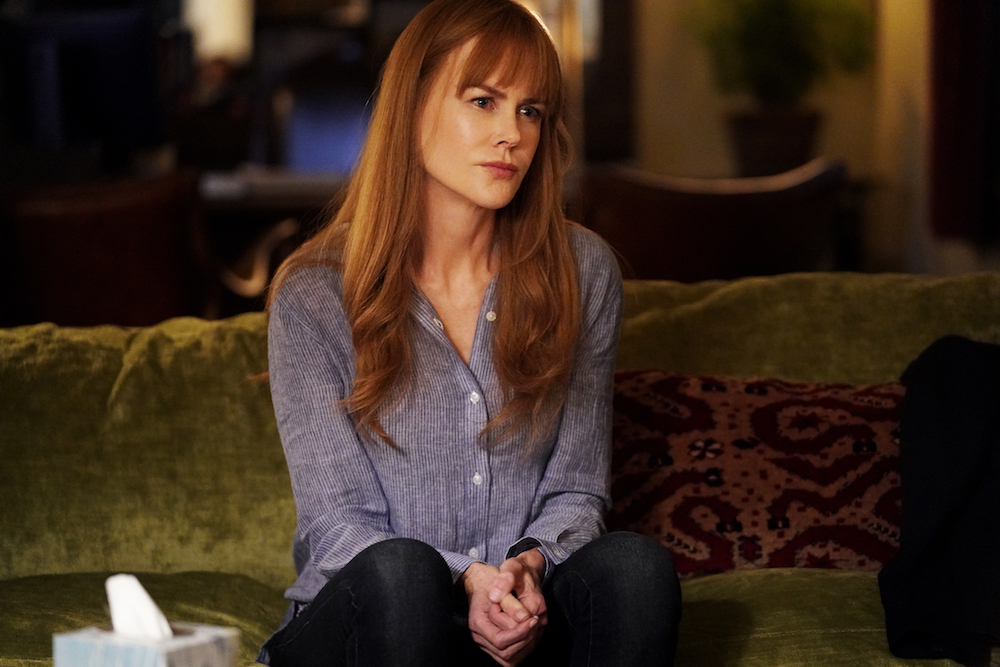 So where does that leave Mary Louise? Well, she’s got Detective Adrienne Quinlan’s hunch as her best reason to keep asking questions; the cop’s assertion grounds her suspicions in the real world, while her real motivation comes from wanting justice for her son. Soon, though, that could transition into wanting protection for her grandkids. Mary Louise has more than enough ammunition to rip the two boys away from Celeste: She knows Celeste drove under the influence. She witnessed Celeste scream and shove her son to the ground. She’s about to establish residency in Monterey, which would give the boys a home nearby and stability during these troubled times.

If Celeste is accused of Perry’s murder, or Mary Louise simply finds out what really happened, that would only further the grandmother’s case for the kids — even if Bonnie (Zoe Kravitz) tries to tell the truth, who would believe her? If this is the route “Big Little Lies” takes in Season 2, seeing Mary Louise square off for parental rights with Celeste in a private war to end all private wars over what’s best for the kids, it would certainly be dramatic. It would give the game cast plenty to work with, and keep the central question re what’s best for our children. “The End of the World” for any kid, and many adults, is losing their parents. The world itself is secondary.

But this is only one route, one story, and one way to drive the rest of the season. There could be another murder (which feels like a bit much at this point), another accident (which may be a tad convenient), or an even bigger lie. With four episodes left, we’re about to find out what the tipping point will be in what’s so far been a melodramatic cover-up. If this week’s episode was a bit stagnant, next week’s promises plenty of action. After all, it’s simply titled, “She Knows.”