At the heart of Sam Esmail's voyeuristic podcast adaptation is a DP/Production Designer collaboration on TV's largest, most elaborate set. 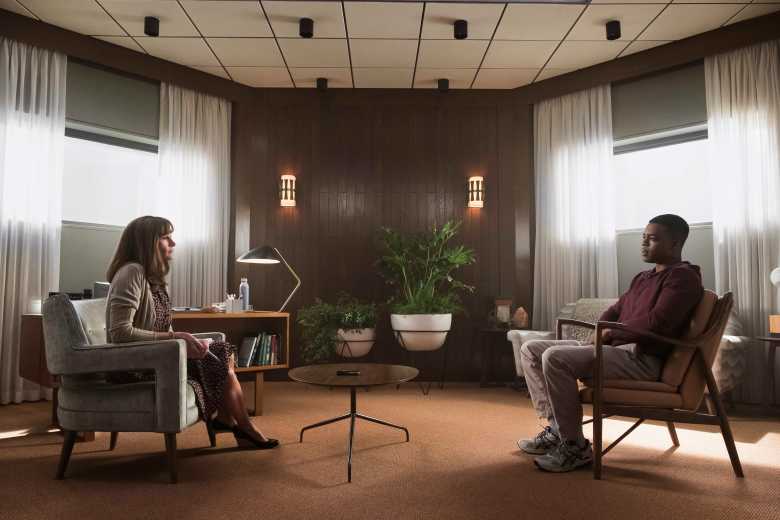 When showrunner Sam Esmail listened to the conversations in Eli Horowitz and Micah Bloomberg’s popular radio-play style podcast “Homecoming,” there was a voyeuristic aspect to the mystery that reminded him of his favorite psychological thrillers from film history.

More than half of Esmail’s series, like the podcast, takes place in the Homecoming Transitional Support Center, a live-in facility that supposedly helps soldiers transition to civilian life. Run by a corporation with questionable but not readily apparent motivations, each episode pulls back a layer to reveal the truth of what is happening at the facility. 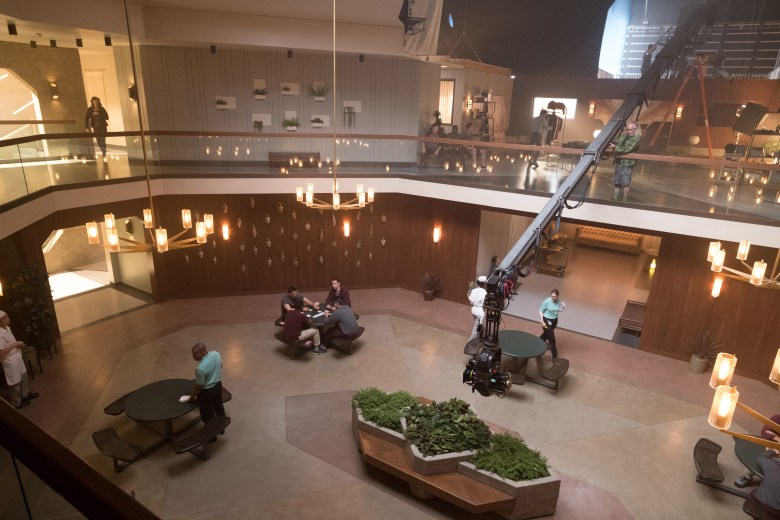 “We’re showcasing the juxtaposition between human interactions against this big corporation, and sort of masking what was actually happening there,” said the series Production Designer Anastasia White. “On top of that, it’s all about surveillance and what’s hidden, [and] you don’t see what the bigger picture is.”

White would need to build Esmail a layered facility set that not only embodied the mystery, but would also allow Esmail and his cinematographer Tod Campbell to put the camera anywhere. Like a microscope or a surgeon’s knife, when necessary the camera could cut through the sets mask.

“There’s all this evil that goes on,” said Campbell. “We wanted to shoot this with a lot of these overhead shots where we put them under a microscope. These top-down shots where it’s like we’re looking in, almost medically, into this world. While the facades are softened with wood and warm light, the camera could slowly reveal it was something different.”

The first conversation Esmail had about “Homecoming” with the cinematographer and production designer he had worked with on five seasons of “Mr. Robot,” was a “creeping, voyeuristic” long take that would happen early in the first episode. The craning long take would follow Heidi (Julia Roberts) walking through the facility and introduce the space, but more importantly establish the relationship of the camera, the set and the audience.

You can watch this long oner below:

“We ended up being able to pull off at least half of the ceiling, and got to do what we needed to do with the crane,” said White. “Then, I pulled a lot of walls, and only had three or four stitches in that whole shot. That was a big part of it, just knowing that particular route that Heidi takes from her office.”

Early on, White built a physical model to scale of what would eventually become a massive, two-story, 22,000 square foot set – housed on the biggest soundstage in Los Angeles – so the trio could map out the complicated camera movements and placement and subsequently so the set could be built to accommodate the camera.

Esmail would task White with creating a facility that felt “askew” – the set itself serving as a backstory of the faceless company. “How would a corporation envision a facility, especially if they’re trying to mislead or misdirect the soldiers?” said Email. “They would take over an office building and then bring in a ‘hip’ designer and just it starts to feel a little off, like they’re trying a little too hard, and the offices are turned into bedrooms. It’s just those little, subtle off-kilter things that really start to fill in the details.”

The key for White was to not go overboard with this concept, but to build the backstory into the materials she used. For White the themes boiled down to natural vs. unnatural. She would use common design elements from the ’80s and ’90s, like wood paneling and concrete aggregate, to bring this to life.

“The bedrooms are meant to be converted offices,” said White. “We kept the dropped ceilings, ceiling tiles, and the fluorescent light fixtures in there just to help show that this space was an office. They weren’t bedrooms that were built for the clients.” 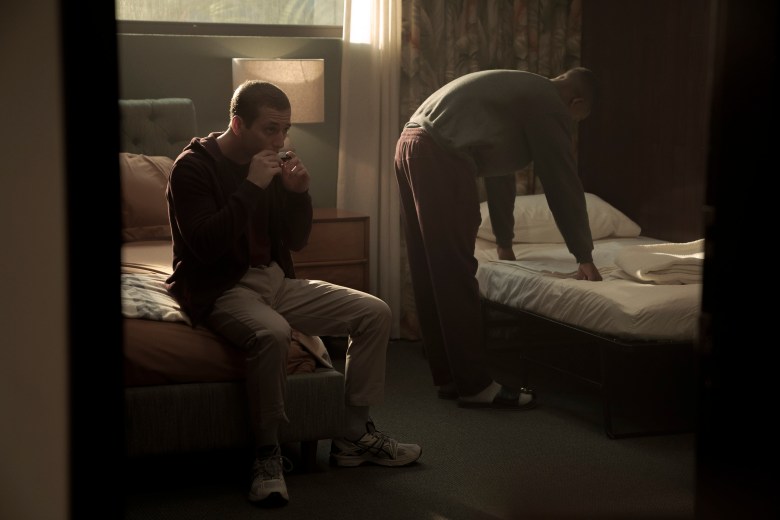 The “clients’ rooms” were on the perimeter of the facility and had a limited view of the outside world. Windows opened to the outside are less accessible than they would be in most office windows would be.

“That was not to make them feel like they were prisoners, but to draw everything into the interior, the central atrium cafeteria space – the communal space with planned activities that were planned for the soldiers,” said White. “The client rooms are in more of a compressed space. When you’re walking through the hallways, all of the client rooms are on the outside, and having that not be so connected to the atrium and the higher ceilinged areas was intentional. Because when they’re going to their private quarters, you wanted them to have the sense they had their privacy even though they have these huge windows onto the hallways.”

That sense of being cut off from the world and having privacy, yet still connected to the community by a series of windows, played into the central theme driving Esmail’s visual storytelling.

“We talked a lot about boxes, weirdly, and that’s part of what drove a lot of the visual grammar of the show,” said Esmail. “We talked a lot about people in fish bowls, and then you bowl out and you reveal the box outside the box. You pull out and you keep revealing the box outside the box and that people are not actually aware of the box that they’re in or, even, that there’s a box that’s inside of the box that they’re in.” 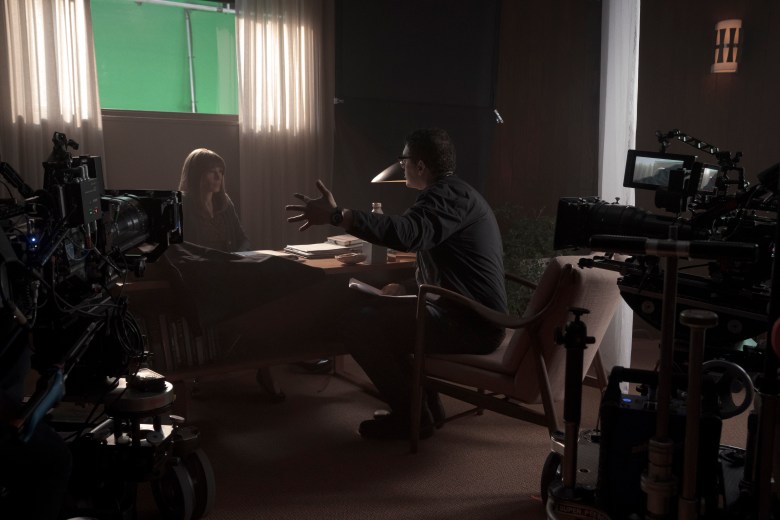 Julia Roberts and Sam Esmail on the “Homecoming” set

As can be seen in the video of the big episode oner (video above), the moving camera starts to reveal all the boxes, or frames within frames, that exist in the facility.

“I have to say that the best thing that Stasia did is she built a scale model out of foamcore of the entire set, where you could take the top floor off, ceiling, walls,” said Campbell. “Then I could take my iPhone and look through the window at almost the perfect perspective. We could get all these sight lines to work out for certain shots that we knew that we wanted to do.”

Adds White: “Tod would ask for a window in a certain place, or make the skylight opening bigger. Sam could say, ‘I definitely want this wall pulled,’ and we could easily figure it out by looking at the physical space and design the exact shot.”

White and Campbell’s early collaboration on the facility set also meant White could build the exact lighting, window positioning and window treatment the cinematographer would need for the look of the thriller. More than 760 practical lights would be built into the enormous set, all on a dimmer board that the gaffer could control. 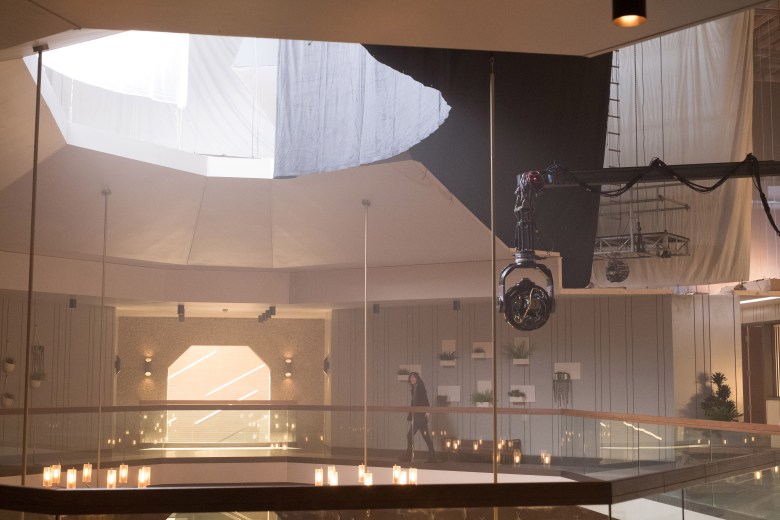 “It was such an awesome space to light and shoot and to examine different parts of an episode and the characters with that level of control,” said Campbell. “That’s what it probably feels like to be on giant movies, but it was nice to get a taste of it here in the television world.”

This Article is related to: Awards and tagged Anastasia White, Homecoming, Sam Esmail, Tod Campbell, Top of the Line