With "Schitt's Creek" filming its sixth and final season, O'Hara reflects on working with Eugene Levy and leaving the show behind. 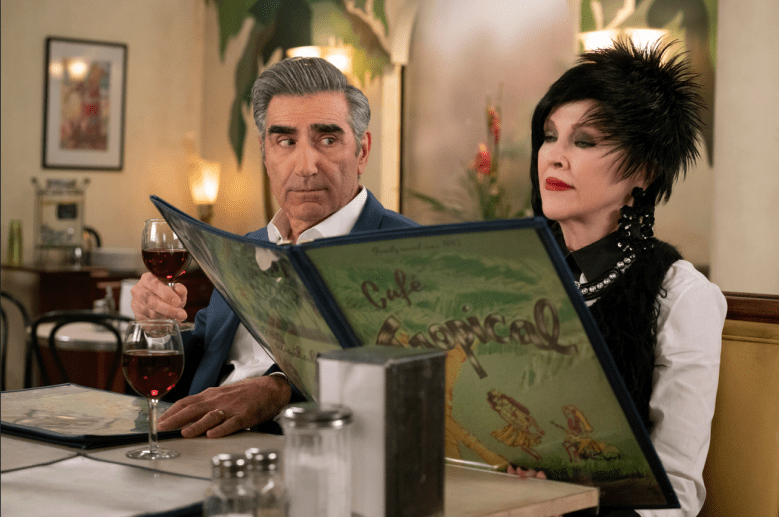 Everybody loves Catherine O’Hara. To mention her name in mixed company is to hear a chorus of coos. “She’s the besssst,” they hiss, with abject envy. The Emmy-winner is so great that despite being a full-fledged Canadian, the U.S. has claimed her as an national treasure based wholly on the principle of Manifest Destiny.

Despite being beloved, the star of Pop TV’s “Schitt’s Creek” is as unassuming as she’s been throughout her entire comedy career. With her roots in The Second City in Toronto and as a founding member of sketch comedy show “SCTV,” the actress comes by her comedic bona fides honestly, and in the process found herself forming a lifelong creative bond with “Schitt’s Creek” co-creator and co-star Eugene Levy.

The pair play Moira and Johnny Rose, whose public fall from grace forces them to move to a small town with their adult children David (played by the show’s other co-creator Daniel Levy) and Alexis (Annie Murphy). What results is a spin on a modern-day “Green Acres” with a bunch of jaded, delusional city folk trying to make their way in more humbling conditions.

But it’s a journey that O’Hara almost didn’t take.

“I wasn’t so much reluctant to work with Eugene and Daniel, but maybe it was a kind of laziness to sign on to something that might be long-term,” she laughed in an interview with IndieWire, remarking on her original reticence to jump wholeheartedly into a television role.

“I think it was a fear of what I was locking myself into character-wise,” she continued, pointing out that it was before Moira Rose had really been built out as a character. “Asking myself, ‘What can I co-create that I will want to live with for this long?’ But I was really lucky, because it’s been lovely.”

As Levy recalled, O’Hara was always he and Daniel’s first choice for Moira – an eccentric actress with an outrageous sense of style, a magnificent collection of wigs, and a preposterous manner of speech – even if she herself was hesitant to commit. In the end, the actor offered up a compromise to assuage O’Hara’s concerns and lower the stakes.

“So I just said, ‘Well, why don’t you come in and do the pilot for ‘Schitt’s Creek’ with no strings attached? If the pilot gets picked up, you’re not committed to do the series but if you could come in and help us out with the pilot, that would be terrific,’” Levy said. O’Hara agreed and the rest is history.

For Levy and O’Hara it was merely the latest collaboration in a career full of them. A shared comedic background helped aid the pair’s bond as scene partners and a host of heavily improvised Christopher Guest films featuring the two have only deepened their comedic chemistry. 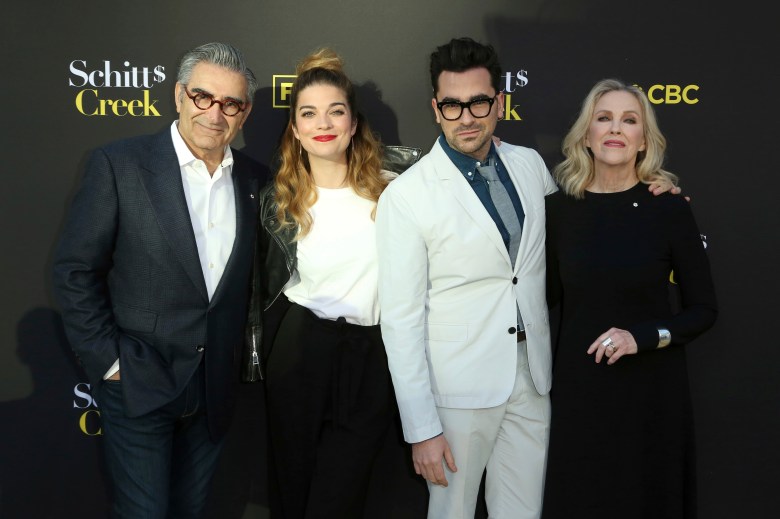 “Our agreed upon answer is that we work in a similar way. We take comedy seriously and we try to make it as organic to the characters as possible,” she said of working with Levy since her earliest days at Second City. “He really is a gentleman and he doesn’t like confrontation, so it’s made me more careful if I have something to say about a thing the script that I’d like changed, he’s taught me to not bring anything else into it. It’s about the work. Focus on the work.”

“We’re kind of the same person in that we’re in a business where people have a tendency to show off and be at the front of the room, entertaining the crowd,” Levy said. “Catherine and I are two people who kind of prefer to be at the back of the room watching the person entertain. We don’t have that gene.”

“We like to get our laughs through our characters,” he added. “But as ourselves, we just don’t see ourselves as funny people.”

Rest assured, that both are, in fact, very funny people. O’Hara is so funny that her fictional children are often looking for things to hide behind to mask breaking character during filming due to unauthorized laughter.

“Season 1 we were just two trainwrecks waiting to happen,” Annie Murphy said of her and Daniel Levy’s on-set reactions to O’Hara. “With Catherine you never know what she’s going to pull out and Dan and I would get so full of anticipation that we’d start giggling.”

“There are a couple times in Season 1 where Dan either has to duck out of the frame or I have my hand over my mouth and that was the best take they could find,” she added.

As the series – now in production on its sixth and final season – winds down, how does someone say goodbye to a brilliant character that they weren’t sure they wanted to commit to and now finds influencing the way she dresses and speaks?

“I’ll probably just continue being like this in life,” she said. “I’ll just keep my character. She’s too much fun to play.”